1 Burning Question: What will Louisville do in year three under Bobby Petrino?

In Petrino’s first stint at Louisville, he guided the Cardinals to an 11-1 record and a top 10 ranking in his second season.

At Arkansas, he faced a stiffer challenge, having to restore an underachieving Razorback program. In his third season, he guided the Hogs to a 10-3 record, which included a trip to the Sugar Bowl. The following year, Arkansas went 11-2 and finished fifth in the country.

Petrino’s successful track record begs the question: Can Louisville have a breakthrough season in year three?

Louisville is even stronger on defense. Sure, Sheldon Rankins departs, but DeAngelo Brown (6.5 TFL, 2 sacks) and James Hearns are back to anchor the defensive line. At linebacker, the Cardinals have one of the top units in the nation in Devonte Fields (22.5 TFL, 11 sacks), Keith Kelsey (107 tackles, 12 TFL), and Trevon Young (10.5 TFL, 8 sacks). The secondary — which led the ACC in interceptions last year — will be among the league’s best again this fall with the return of Trumaine Washington (4 INT, 6 pbu), Chucky Williams (3 INT, 6 pbu), Josh Harvey-Clemons (3 INT, 2 pbu), and Shaq Wiggins (2 INT, 11 pbu). 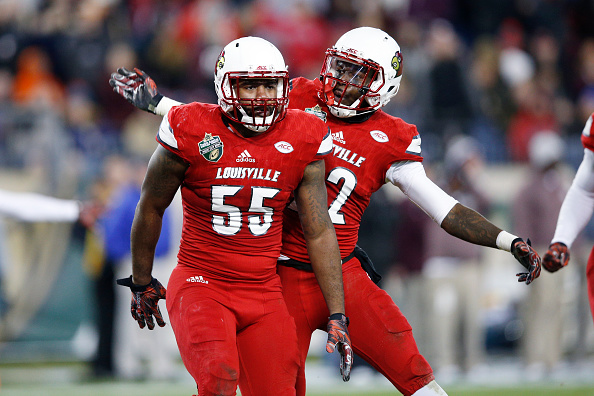 NASHVILLE, TN – DECEMBER 30: Keith Kelsey #55 of the Louisville Cardinals celebrates with Chucky Williams #22 after breaking up a pass against the Texas A&M Aggies in the first half of the Franklin American Mortgage Music City Bowl at Nissan Stadium on December 30, 2015 in Nashville, Tennessee. (Photo by Joe Robbins/Getty Images)

97 – This was the number of tackles for a loss that the Cardinal defense recorded last season, which ranked 17th nationally. Louisville’s defense was one of the most disruptive in the ACC, ranking third in the league in tackles for a loss and second in sacks. The Cardinal D was especially tough in conference play, recording an average of 8.25 TFL per game and a league-best 3.13 sacks per game. That trend will need to continue this fall for UL to win the Atlantic division.

11 – The number of turnovers that Louisville had in its five losses last season. The Cardinals led the ACC in takeaways last year, forcing a total of 26 turnovers. Unfortunately, they turned the ball over a league-worst 27 times, which cost them dearly in close losses to Houston and Clemson last season. Louisville has to do a better job of protecting the football if it’s going to win close ball games this year.

Why it Matters: Are the Cardinals a contender or a pretender in the Atlantic Division? The result of this contest will provide the answer to that question. FSU returns all 11 starters from a stellar offensive unit that racked up 510 yards against the UL defense last season. However, it’s worth noting that the Cardinals held a 14-13 lead in the third quarter last year before two turnovers allowed the ‘Noles to break the game wide open. If Louisville is going to win the division, it must get a “W” in this contest. Otherwise, the Cardinals will need a lot of help.

Why it Matters: Even if the Cardinals should lose to Florida State, they could still salvage the season with a victory over Clemson. That won’t be an easy task. Led by Heisman Trophy candidate Deshaun Watson, the Tigers offense will be one of the most explosive units in the country, welcoming back eight starters from last year’s squad, which ranked 11th nationally in total offense, averaging 514.5 yards per game. On the other hand, the UL defense turned in an outstanding effort against the Tigers last year, forcing two turnovers and holding Watson and company to a season-low 20 points. The Cardinal D will need to turn in a similar performance in this year’s contest, which could ultimately decide who wins the Atlantic Division championship.

Why it Matters: Although the Governor’s Cup matchup with Kentucky resonates more with the fans, the Houston game will have a more profound impact on the season. After a decisive victory over Florida State in the Chick-Fil-A Peach Bowl last year, the Cougars enter the 2016 campaign ranked No. 14 in the Coaches’ Poll. If Houston beats Oklahoma in the season opener, Tom Herman’s squad might enter this game as a top 10 team. Regardless, this Thursday night contest presents Louisville with another opportunity to defeat a ranked opponent. Should the Cardinals come up short against Florida State and/or Clemson, a victory in this game could be just enough to vault them into one of the prestigious NY6 Bowls.

Lamar Jackson, QB – Jackson is arguably the most dangerous quarterback in the country. He’s an explosive runner, finishing eighth in the league in rushing (960 yards, 5.89 ypc) and second in rushing plays of 10 yards or more (45). Yet, he’s also a solid passer, completing 38 of 63 passes (60.3%) for 490 yards and 4 TDs in three games against ranked opponents last year. With a full year of experienced under his belt, Jackson could put up even better numbers, which will help the Cardinal offense become more consistent this fall.

Devonte Fields, LB – The 2012 Big 12 Defensive Player of the Year, Fields had a monster season in his first year in a Cardinal uniform. He consistently made plays in the opponents’ backfield, registering 22.5 tackles for a loss and 11 sacks. He’ll team up with Keith Kelsey (12.0 TFL, 3 sacks) and Trevon Young (10 TFL, 8.5 sacks) to form what is arguably the best group of linebackers in the country.

Trumaine Washington, CB – Washington was the most versatile player in a secondary loaded with playmakers. He’s a solid cover corner, leading the team with four interceptions, while ranking second in passes defensed with 10. However, he also excelled in other facets of the game, recording 7 TFL, 2 sacks, and 3 forced fumbles. He’ll be a key player in the secondary again this fall.

Brandon Radcliff, RB – Louisville struggled running the ball at times last year, averaging just 85 yards per game and 2.72 yards per carry in its five losses. If the Cardinals are going to win the Atlantic, they must run the ball more effectively. Radcliff is the key to making that happen. A dependable running back, Radcliff has rushed for 1,462 yards and 20 TDs in three seasons at UL. He should easily improve on last season’s 4.56 yards per carry now that the Cardinal offensive line — which started as many as three freshman at times last year — has more game experience.

This probably doesn’t seem like a bold prediction since he was named to the preseason All-ACC team. However, despite finishing third in the nation in tackles for a loss and fourth in the league in sacks (first among linebackers), Fields didn’t make the first, second, or third team last year. He’ll be the most disruptive player in the conference this season, and capture the second Defensive Player of the Year award of his college career.

4. Louisville ranks in the Top 20 nationally in turnover margin

As noted earlier in the preview, turnovers really hurt the Cardinals last season. Of course, those things tend to happen to inexperienced teams. With another year of seasoning, Louisville will cut down on the number of mistakes it makes this fall. Since the Cardinal defense will continue to produce turnovers and negative plays with its aggressive scheme, the net result will be a positive turnover margin.

The Cardinals could have won this game last year, but turnovers and special teams miscues prevented that from happening. That won’t be the case this season. Lamar Jackson will outduel Greg Ward, Jr. and lead Louisville to an impressive Thursday night victory.

2. Bobby Petrino receives an offer from an SEC school

Yes, I’m fully aware that he has an awfully large buyout in his contract. But for an SEC program that wants to win right now, money shouldn’t be an issue. Regardless, Petrino’s success at Louisville (both stints) and Arkansas will make him an attractive candidate for a number of openings across the country. Although it’s highly unlikely that he would leave, it won’t stop other schools from calling, especially with a victory over Tom Herman.

Led by an explosive offense, a stellar group of linebackers, and a solid secondary, the Cardinals will win at least 10 games. While Louisville might not win the Atlanta Division, it could finish the season in the top 10 with a win over Florida State or Clemson.