1 Burning Question: Is Michigan ready to make the CFB Playoff run everyone seems to be expecting them to?

Expectations are are a funny thing. You don’t create them, control them, or determine them, yet you cannot escape them. Coaches and players can say, “those are someone else’s expectations.” But you understand when you’re achieving things or underachieving things based on other people’s perception of how good you should be.

For Michigan, it’s been a long slog back to national prominence since Lloyd Carr had them in the mix in 2006. A decade, and three additional head coaches later, here is Michigan, back with an expectation and look of a national title contender. The Wolverines will be faced with more scrutiny and media attention since probably that 2006 season, when they ran the table up until losing to Ohio State in the final game of the season.

Jim Harbaugh has a veteran defense with no real holes, an offense that is built with strength along the offensive line, and in John O’Korn, a quarterback with a proven ability to win games at the college level, albeit at Houston. But heck, look at what Harbaugh did in one season coaching former Iowa quarterback and lovable “game manager” Jake Rudock. The talent certainly is there. So is the pressure. How they adjust to that pressure could determine big, big things in 2016, let alone beyond. 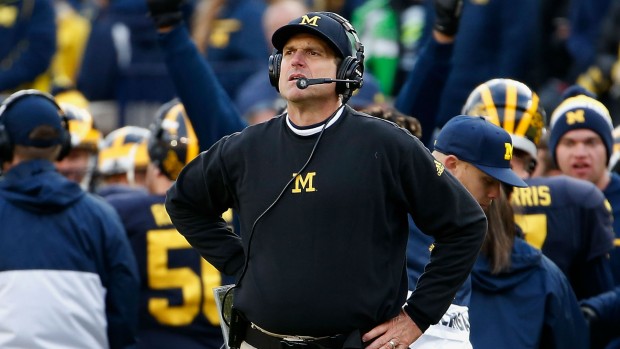 89.5 –  The percentage of catches 2016 returning receivers made last year. Michigan returns its top three pass catchers, who were top three by a mile with 159 catches total. They return 231 of the total 258 receptions from 2015, and that’s a welcome sight for any quarterback.

.276 – Opponents’ third down conversion percentage, third-best defensively in the nation. In the first year under the new staff, Michigan hit the ground running on the money down. The key to winning any game is getting the other team off the field when you absolutely have to, and UM was top shelf in that category. If they keep this trend up as the Don Brown era starts, you’re looking at some big things.

Why it Matters: Michigan gets off a punt, takes a knee, runs the ball into the line, any of those… and they beat Michigan State last season. It was possibly the most obtuse finish in all of sports last season. Any sport. The win helped propel the Spartans straight to the CFB Playoff. There’s probably a simmering bitterness on Michigan’s roster about this game that will only come to a full boil when the two teams reach the field. The stakes will likely be similarly as high.

Why it Matters: Michigan starts the season with a whopping five home games to get off on a good foot, but plays three of their last five on the road against major contenders. Michigan State, Iowa, and Ohio State were the only three Big Ten teams that had better records than them in 2015, and Iowa is the second tilt on this road Murderer’s Row. The Hawkeyes always play the Maize and Blue tough, and once again, they should be plenty good this year too.

Why it Matters: Even when it means nothing (in the standings), it means everything. This is the most vicious and intense rivalry in college football, and we seem to be trending back to the normal, where it has national implications every year. Both teams, should water meet its level, figure to be in the CFB Playoff hunt. It honestly doesn’t get bigger than The Game meaning something like that.

Jabrill Peppers, Everywhere — Here’s a list of things on the football team Jabrill Peppers didn’t do for Michigan last year: Kick. He probably needs to add that to his skill set, right?

Peppers is the most dynamic talent in Ann Arbor since Charles Woodson, and can do so many things to affect a game from so many places that he’s simply a human fireworks show. You organize your entire day around watching it. You can spell “incredible” without “Jabrill,” but that only means “incredible” needs to have a different spelling.

John O’Korn, QB — You look at what this staff did with Jake Rudock… who was mostly an overlooked “game manager” and think, “Whoa, JOK was a winner in a pass-happy offense in Houston.” To get anywhere you want to be in football anymore, you need a quarterback that can make plays. It’ll be very interesting to see how O’Korn does in Ann Arbor.

Jake Butt, TE — Butt came back from injury in 2015 in rare form, or maybe Butt Form, since that’s who he was before he left. The strong-handed tight end roped in 51 catches, good for second-best on the team, and just continued to make himself available when Rudock needed him. He’ll be a huge sticks-mover for this offense again in 2016.

Jourdan Lewis, DB — Named a first-team All-American by USA Today, much will be expected of Lewis this season. He’s a big time shutdown corner who will get his shot on Sundays. But for now, Lewis is an intimidating presence for quarterbacks to sling at on a secondary with a ton of talent. He was a key in the aforementioned third down defense and will need to be again.

5. John O’Korn will finish with the best passing efficiency rating in the Big Ten

Folks don’t have any idea how big of a story this guy is going to be. In his last full season at Houston, he threw for a 58 percent completion rate, but with 28 touchdowns to 10 interceptions and 3,117 yards. He has a big-time arm and is a perfect fit for a team with a ton of talent needing to break in a new quarterback. This staff did wonders with hard-working Jake Rudock. O’Korn has more natural talent by far.

Sad to say, but at this point, this is a bold pick. OSU has flat-out made Michigan pay a leasing fee to be in the Big Ten with the whippings they’ve handed out. But everyone knows it won’t last forever. OSU has their own powerhouse to roll out there in 2016, but this game, which should have major national implications on the line, will go to the Wolverines.

3. Jabrill Peppers will win the Heisman and then go pro

Michigan is the only program to have a primarily defensive player win the Heisman, so it only makes sense to have that record duplicated by a guy who emulates that previous player (Charles Woodson) perfectly. Peppers can do it all. He’s a willing tackler, great special-teamer, can catch, run, line up at QB, and probably cook you a perfect mid-rare steak on the sidelines while he’s at it. The hype gets met in full this season.

2. Michigan will win the Big Ten

With road games at Michigan State and Ohio State, the road will be a brutal one to hoe. But the Wolverines start off with a confidence-building schedule, having the first five games at home. The Big Ten East seems vastly better than the West, so the challenge will obviously be the last man standing of a nasty division that may be the best in college football. But the Wolverines get it done.

1. Michigan will make the CFB Playoff

By about now, you can probably imagine this was coming. Look at the remainder of the predictions. It was either this or “Jim Harbaugh cures world hunger.” Michigan has the talent on both sides of the ball. They have veterans and depth at every position. Should they have health, the Wolverines will move onto the grandest of college football’s stages, where Hail to the Victors will be sung from the rafters as they play for the biggest of prizes.