1 Burning Question: Can Chris Petersen Live up to the Hype?

Washington has been getting major hype from all sorts of media outlets this entire offseason. There is a lot of talent on the team and a lot to look forward to. The preseason Coaches’ Poll put the Huskies at No. 18, lower than most media seem to have been predicting — which probably means that the Huskies will be ranked higher when the AP Poll comes out on Aug. 21.

If we’re being honest, though, the hype for Washington this season has nothing to do with the fact that the Huskies have a talented quarterback and running back to go along with a ton of returning talent from a great defense last year. No, the Washington hype is not about the players. It’s all about the coach.

Chris Petersen came to Washington with much hype as schools had unsuccessfully attempted to woo him away from Boise State for many years. He floated a little under the radar the past two seasons while building the program. No one has forgotten how good of a coach he is, though. He won three coach of the year awards in his tenure at Boise State and was often mentioned among the best coaches in the country. Moreover, he became famous for developing unheralded 2-star players into NFL prospects. Fans have been imagining for years what he could do with Power 5 talent.

The time has finally come for us to see what Petersen is really made of. Boise State was a successful program before Petersen came to town. Former Boise coaches like Dan Hawkins and Dirk Koetter did not have any success when they moved on to power conferences. Will the same happen to Petersen? It seems unlikely, but it’s always possible.

The hype this season will create an almost do-or-die atmosphere for Petersen. It is only his third season, and lack of a breakthrough this year will not be viewed as a failure. Because of the expectations being generated, though, we have to wonder what the potential consequences of another decent, but not great, season would be. If Washington is mediocre this year, the old whispers that it was great quarterbacks like Jared Zabransky and Kellen Moore, and not Petersen, who really made those Boise State teams great might return. Either way, the success or failure of this season will be placed squarely on the shoulders of head coach Chris Petersen. 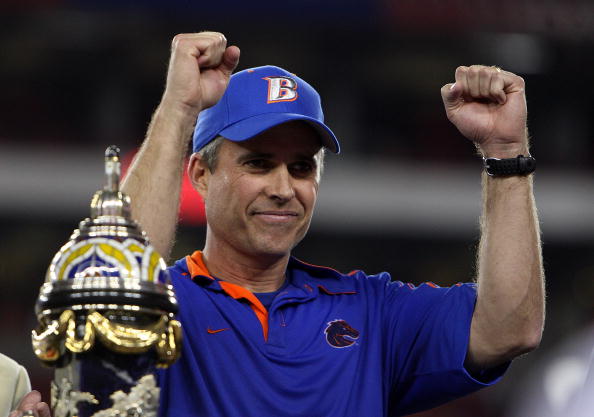 GLENDALE, AZ – JANUARY 04: Head coach Chris Petersen of the Boise State Broncos celebrates after defeating the TCU Horned Frogs 17-10 during the Tostitos Fiesta Bowl at the Universtity of Phoenix Stadium on January 4, 2010 in Glendale, Arizona. (Photo by Jed Jacobsohn/Getty Images)

89.3% – This was Chris Petersen’s winning percentage at Boise State. Petersen has started his Washington career with a modest 15-12 record, winning 55.6 percent of his games. Winning at an established mid-major is certainly easier than turning around a mediocre (at best) power conference program, even if said team was ranked the year before Petersen took over. Petersen was brought in because Washington expects him to bring a level of success similar to what he achieved at Boise State. Still, that average of close to 90 percent is going to be incredibly difficult to match. It’s unreasonable to expect it, but it’s the number that fans and leaders of the Washington program are looking for.

9 – This was Washington’s ranking in adjusted defensive efficiency according to S&P last year. One of the most respected advanced football metrics said that Washington had the ninth-best defense last season. That defense now returns seven starters. It will be very, very good this year. Whether it is good enough to withstand the Pac-12 North and its different types of powerful offenses (compare Stanford and Oregon, for example) will be the real test. But that Washington D will be nasty this year.

3 Key Games that will Make or Break the Season

Why it Matters: This is Washington’s second conference game, but will be the most highly-anticipated of the Chris Petersen era. Can the Washington defense slow down Christian McCaffrey? More importantly, this game will show us very early if Washington can be a real contender in the Pac-12.

Why it Matters: Forget whatever conference or national implications this game would have. Oregon is a hated rival and has beaten the Huskies 12 times in a row. That just has to end. If Washington went 1-11 this year with that one win being Oregon, the season would not be viewed as a total failure. Washington will win a lot more than one game this year. Beating one of its rivals on the way to contending for a Pac-12 title would be icing on the cake.

Why it Matters: I thought of putting the USC game in this slot, but this being the Apple Cup and the awesomeness of the potential match-up made me choose this game. Washington State will have an “air raid” offense facing off against what should be one of college football’s best defenses. That should make for an excellent game in its own right. Add on the fact that this will be the season-ending game for a potential Pac-12 contender and this game could be huge.

Jake Browning, QB — Browning is a good passer who can run as well. He was pretty good last year as a freshman, though he definitely has room for improvement. Washington has talent behind him on the depth chart, but Browning is the only one with any real experience. (And, if I’m being totally honest, much of my assessment of K.J. Carta-Samuels’ talent comes from watching his brother play at Wyoming.)

Myles Gaskin, RB — Gaskin looks like a prime example of one of Petersen’s “diamonds in the rough.” He was only a 3-star coming out of high school, but he is fast, powerful, and looks to be developing into quite the offensive force. His long touchdown run in the Heart of Dallas Bowl ran on highlight reels throughout bowl season and shows his power and speed perfectly.

Elijah Qualls, DL — Qualls is the anchor of a defensive line that will return a combined 69 games played from last season. He recorded 4.5 of the teams 34 sacks last year, but only 7.5 of those sacks came from the defensive line. If Washington is going to dominate in the trenches — which will be exceptionally important against teams like Oregon and Washington State — Qualls will need to lead the way.

Joe Mathis, LB — The Washington defense loses its two leading linebackers. Corey Littleton and Travis Feeney littered the stat sheets and highlight reels with huge defensive plays last season. Someone will have to step up to fill that void. Mathis and Psalm Wooching look like the best bets to at least be the emotional, if not physical, leaders of the linebacking corps. Mathis has shown some real skill in his own right, so I’m guessing he will be the best linebacker on the team this season. 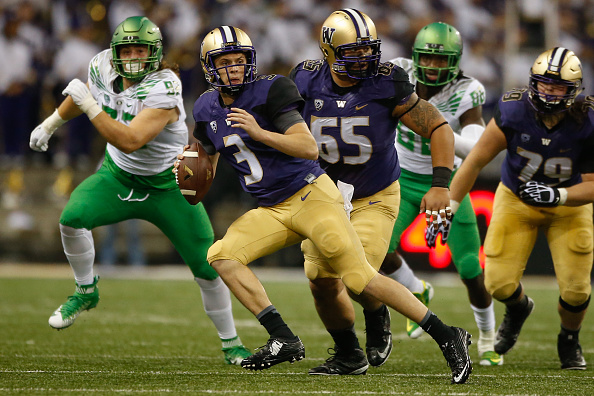 Twelve years is enough, don’t you think? The Huskies will finally get the better of the Ducks, as a strong defensive line won’t let Oregon find any real rhythm. It will be early enough in the season that Oregon will have some quarterback and rhythm issues on its own, which means that Washington will be able to successfully slow down the Ducks and end this streak.

4. Jake Browning will be a Davey O’Brien Award finalist

The Heisman might be too much for anyone to hope for this year, as there are just way too many overhyped players coming into the season. Browning is a talent, though, who can throw very well and get his name repeated on recap and highlight shows when he uses his legs. He will get buzz and attention, which will put him squarely on season-ending award watch lists as long as Washington keeps winning.

3. Chris Petersen will turn down an elite-level job

Okay, so this isn’t bold to anyone who knows Washington (or Boise State) football, but it might be news to the rest of the country. I don’t know if it will be this year or not, but Petersen will find success at Washington. Eventually, the blue-bloods will come calling when one of those jobs opens up — be it through a firing or retirement. Petersen won’t take any such job, though. He likes his West Coast and he likes schools in not-too-small but open cities. Boise and Seattle fit that bill perfectly. I can’t see anywhere else he would want to go.

2. Washington will shut out at least two schools this season

The defense is just that good. And for the purposes of this prediction actually being bold, one of those two shutouts will come in-conference. That’s right. Washington will hold a Pac-12 team not named Colorado (Colorado isn’t on the schedule) scoreless for 60 minutes.

To answer the burning question I posed above, I really do believe that Petersen can live up to all of the expectations and more. A Playoff spot might be too bold to predict at this point as the Pac-12 champion could easily have two losses in conference. A two-loss conference season, coupled with Washington’s weak non-conference schedule, would probably leave the Huskies on the outside looking in unless they can go 12-1. Winning the Pac-12 is definitely possible, though, and it will leave Washington and Petersen as the most hyped team in the country coming into 2017.