Often times we see college football programs move away from their history and tradition when it comes time to throw together an alternate uniform. Sometimes we get some solid efforts with retro-inspired uniforms, but it seems they are few and far between. So when word broke about the uniform Hawaii plans to wear this weekend when they head to the mainland to visit defending national champion Ohio State, I was pleasantly surprised.

Hawaii will be wearing a new retro all-white uniform designed by apparel partner Under Armour, and it will be complete with rainbow stripes on the shoulder pad and pants. For a program that once shied away form embracing the rainbow look, it is always fun seeing this program return to its roots. Hopefully the reaction to this look will encourage Hawaii to consider making this a more regular look for the program.

This is now the first time Hawaii has broken out this retro look, but it is the first time the retro look makes a trip to the continental United States. This return to the program’s roots started a couple of years ago when the program decided to put the rainbow back in the Rainbow Warriors.

We can all blame former Hawaii football coach June Jones for Hawaii dropping the rainbow image in the first place. In 2000 Jones asked for the football program to simply go by the nickname of the Warriors, as opposed to the Rainbow Warriors that had been used for years. At the time it was thought the inclusion of the word “rainbow” was not a good recruiting tool for the program, because what tough football player wanted to be known as a Rainbow Warrior? Most of the men’s athletics teams at Hawaii were already going by the nickname of the Warriors as well. Fortunately we have continued to grow and evolve since that time, and now we can respect the uniqueness of the nickname of the Rainbow Warriors. Embrace your roots and identity. That is what Hawaii is doing now.

Hawaii is a program with a unique heritage throughout its program. It is one that embraces the Hawaiian culture, most visible with a pregame haka. When most people think of Hawaii they think of bright colors and beautiful scenery and sunsets, and perhaps a needless Saved By The Bell story line to milk the franchise as dry as it could get.

For the sake of comparison, here is what Hawaii typically wears when on the road… 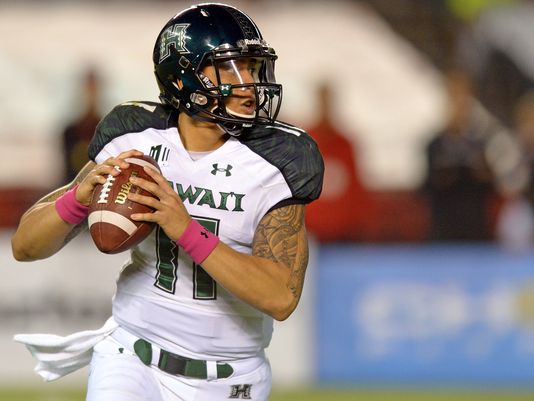 In all fairness, this is not a bad look for the program. I actually really like the approach to this uniform look. However, it is important for college football programs to stay true to their identities. This is why when Hawaii suits up in this new alternate look at Ohio State on Saturday the Hawaii program will be a big winner, if not on the scoreboard.