The Iowa Hawkeyes and Florida Gators played 11 years ago in the Outback Bowl, one of the worst officiated games in college football history. The two teams match up again in the 2017 Outback Bowl.

There are many games that college football fans immediately think of when asked to talk about poor officiating. The onside kick fiasco in Oklahoma-Oregon 2006 stands out to many younger fans. Older fans might immediately think of Colorado’s famous national championship-winning fifth down.

Some might even remember the out-of-bounds catch from the 1982 Nebraska-Penn State game. But it’s hard to get too upset about that call because of how bang-bang it was.

There are numerous plays that fans remember as being terrible. Phantom penalties, weird reviews, and more. Every team has those individual plays throughout their history that they think is the “worst call ever.” Well, Iowa fans have a legitimate claim to being on the wrong side of the worst-called game ever. It was the last time Iowa played Florida in the Outback Bowl, back in 2006.

Every game has questionable calls. Every game has 50-50 calls, and normal variation dictates that in some games — with sample sizes so small — one team will have significantly more. This game, however, was not that. Not in the slightest. Not only did several “50-50” calls go against the Hawkeyes, several blatantly bad ones did as well–include what I like to call the worst individual call in football history.

First of all, the following video nicely sums up six of the worst in the game. One of them (No. 5) didn’t matter much — an awful missed penalty that should have been called on Florida would have been declined anyway — but you won’t find many games with this many calls this bad, let alone all against the same team. Rather than go through the whole game, this video focuses on six of the more egregious plays that went against Iowa.

Most of those plays had some real effect on the game. When looking at the first play, remember that while college football no longer has a “force out” rule, that rule existed back in 2006. If a player would have caught the ball in bounds but was clearly forced out while in mid-air, it was a catch by rule. That play would have continued an Iowa drive near midfield. Instead, the Hawkeyes punted.

The third play was a decisive one as well. A poor — at absolute best — helmet-to-helmet call against Iowa gave Florida new life on a drive late in the first half. Florida ended up scoring a touchdown off of that at the very end of the half.

My favorite call on that video, though, is the fourth one. It is, absolutely, one of the worst individual calls in football history. It’s not game-changing in and of itself, but the sheer absurdity of it just has to give us pause. Let’s take a quick look at this. 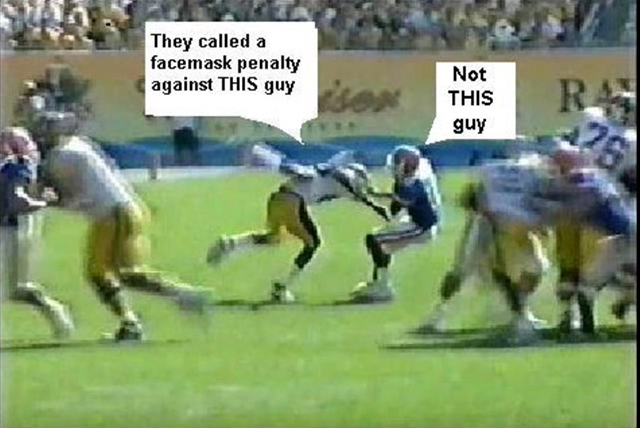 The graphic says it all. The Iowa player was literally dragged to the ground by his facemask, yet he was flagged for it. I dare you to find an individual call more egregious than that one, at any level of football, ever.

Despite all this, Iowa came back and made it a compelling game. The Hawkeyes scored 17 straight points in the fourth quarter, and after a field goal brought them to a 31-24 score with 1:22 left, recovered an onside kick to give themselves a chance to tie. But in their final egregious call of the game, the referees couldn’t have that. A phantom offsides call wiped out the Iowa recovery, and Florida recovered the re-kick and won the game. 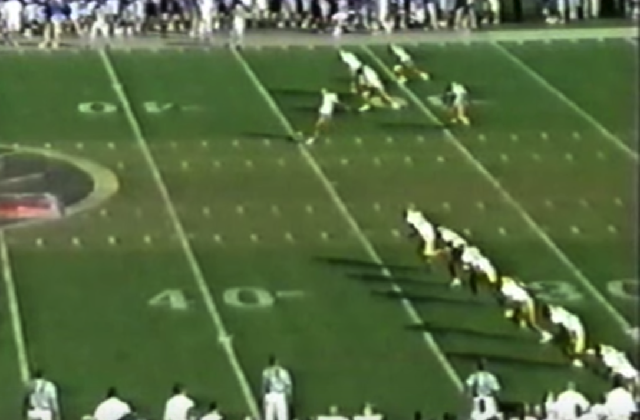 While Hawkeyes fans will always remember this game as one that was robbed from them — and, unlike when most fanbases have such complaints, the Iowa fans have a strong case here — this game still does a lot for college football. It will go down as possibly one of the most one-sided games ever, and additionally spawned one of the greatest spoofs of a popular commercial series that YouTube has ever seen. (Who else remembers the “Real Men of Genius” series from Bud Light?)

When Iowa and Florida meet on Jan. 2, the rematch will be 11 years to the day of when the two teams last played. It’s a game which many Iowa fans have been anxiously waiting for more than a decade. And to get it in the Outback Bowl again just makes it that much more exciting.