Telling sports fans not to overreact or freak out is like telling water to stop being wet, but we’ll go ahead and do it anyway regarding the CFB Playoff rankings that came out last night.

Don’t freak out. It doesn’t matter yet. It’s all still in front of us. They (the arbitrary college football Men in Black) want you to freak out, discuss it, blow up Twitter with your rage, etc. Avoid it.

But please, understand, there are things to be concerned about three weeks in. The truth is, there is so much football to be played, so much organic culling of playoff contenders to be done, it’s pointless to rage as though this is the final product.

Still, the members of the CFB Playoff committee shouldn’t be above at least being questioned regarding how they’re coming to their conclusions. This is why it’s all a dog and pony show for the worst rather than what the NCAA basketball selection committee does, which is just announce at the end of the season what’s going to happen and you’re left to just accept it.

Why that doesn’t happen in football is rooted in fake outrage and “driving discussion,” as though that’s ever been helpful in picking anyone to play anything in sports. The truth is, we really don’t NEED to see these rankings every week with their special, flashy television show … the same way we don’t NEED to see basketball rankings and are just fine with it until the final product happens in March.

So the fact that we go through this weekly exercise — solely for the purpose of a television special, ratings, advertising revenue, and to basically get people riled up and watching it every week — should, by itself, give you pause about this system in the first place.

But as week one really should have been met with a yawn and the passing interest of, “This is how they’re determining the teams,” and week two as more of a window into how they think week to week, by week three, you should be noticing trends. There are a few which aren’t good.

The unbeaten Seminoles dropped below one-loss Oregon after beating Virginia at home. Oregon defeated Utah in Utah, and Utah is a good damn football team, so yes, it’s an impressive win. But Mississippi State whipped up on FCS flogging post Tennessee-Martin, and didn’t drop a bit.

Now, one could suggest that since Notre Dame — FSU’s biggest win — looked terrible, maybe that factored into it? Well, MSU’s two biggest wins — Auburn and LSU — both lost at home, one to a team that can’t defend its own shadow.

Why is this a problem? For one, it’s asserting that a win over Utah with a loss is better to have than a win over a Power 5 school but having no losses. It also suggests that a win over a Power 5 team at home will drop you as opposed to caning an FCS school this late in the season. How is there justification for that rationale? Is Florida State succumbing to a more stringent, ever-arbitrary “eye test” because it won the title last week? This is a huge gaffe by the committee because there is no rationale for the decision.

Moreover, if it had that much to do with Notre Dame, why did Arizona State skyrocket higher for putting a beating on the Irish? This suggests that the committee is dangerously judging teams with a different expectation level, or relying too much on the impossible to really argue “eye test.” 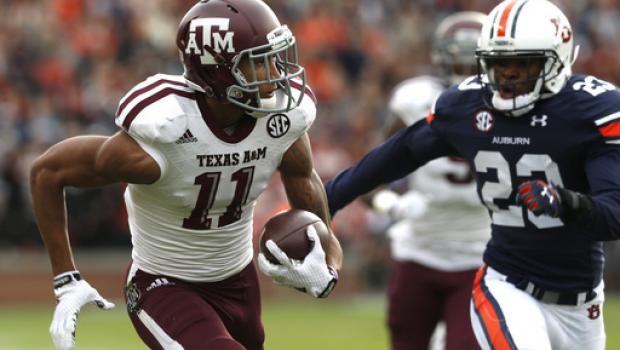 Is Texas A&M a team with a better profile following its win over Auburn? Certainly. However, one should not do a 180 in terms of assessing the Aggies, who were thrown around like rag dolls for a solid month before pulling off this upset against the Tigers. One would like to think that losing at home to A&M should have caused a much more severe penalty for Auburn in the rankings. Can Auburn regain some leverage by winning out? Yes. However, that moment hasn’t come yet. If the committee didn’t think it was important to drop Auburn out of the top 10, just how much is it evaluating — and punishing — bad losses? That’s merely one of many concerns to examine in the aftermath of the latest playoff rankings.

Bust out the breathalyzer at this point. The one worry about the committee going in was regional biases. How much would committee members evaluate teams in a given region, and if/when they lose to lesser opponents, are they judged fairly in comparison to teams from other conferences in other regions?

Texas A&M isn’t just bad on defense, the Aggies are deplorably bad. They could go nickel and not be able to stop the mailman from getting the morning paper in the box from 10 yards away, and it’s possible the mailbox might get some YAC.

Yet, the Aggies went into Auburn and won, aided by Auburn fatally wounding itself with unforced errors. Against a TAMU team with a quarterback making his second start ever, the first being a sneak-out-the-back-door win against UL Monroe of the Sun Belt.

Yet Auburn barely drops and hangs in the top 10. If losing at home to a team that’s been morbidly bad more than once this season doesn’t legitimately ding you, what does? What’s the justification at this point? The win over Kansas State? The Wildcats were beaten soundly by TCU, adding a little less luster to that win for Auburn.

I don’t really have the answer to this one … if Arizona State should get a semi-pass for suffering its one loss without early-season-Heisman-candidate-gone-injured -quarterback Taylor Kelly. I’m not sure where that line is, because injuries happen to everyone.

I do know this: Ole Miss is not as good a football team without Laquon Treadwell as it is with him. However, that hasn’t stopped the Rebels from hanging around the top 10 and even moving up after beating FCS opponent Presbyterian. It sure seems as though the committee loves them some FCS competition.

Plus, one of the teams Ole Miss lost to (LSU) dropped its third game of the season … the second at home at night. I don’t know how you work injuries into this equation, and maybe you can give the committee a pass of sorts for wanting to see how the team looks against even more elite competition before making a judgment on how the team will manage without said star player, but I would expect that if Ole Miss struggles without Treadwell, we’re going to need something better than “Well, they’re in the SEC West, so they get a little bit of a pass.”

Because right now, that’s what some of these rankings feel like.

In the end, as was said above, there is so much to be done, we’re barely framing the house. We haven’t even begun to think about putting in the insulation, drywall, carpet, and eventually paint.

However, as the weeks go on and we can compare one week to the previous week, you’ll start to see how the opinions are being formed. Right now, there are some opinions that smell like Chicken of the Sea, at best.