Michigan’s athletic department is fourth in the nation in total revenue, bringing in over $143,000,000 in 2013. That also registered as second in the B1G … ahead of rival Ohio State. In a word or two, it’s “not broke.”

But there are lies, damn lies, and statistics. And I think we’ve hit the cliche quota for this column already.

The revenue is great. The cost has been the soul of Michigan football though, in many ways, and eventually, it needs to come back.

As has been well documented, Michigan is losing season ticket holders in football at an alarming rate, expecting close to 19,000 fewer student ticket sales for the coming year than the previous one. That’s staggering. That rates around 23 percent.

The dirty truth is that gate profit for live events isn’t really what brings in the revenue, it’s more the advertisers and ancillary stuff you can charge the blood out of.

But in college football, fans … and especially students … are the soul of the sport. And yet as more and more choose to stay home in Ann Arbor, prices continue to go up.

Other than for a college education … which as of January, is seeing 50 percent of graduates in jobs that don’t require degrees … it’s hard to find something else where as the value of the product goes down, the price of it goes up.

It’s one that probably won’t be felt for 5 to 10 years, when students who tuned out become indifferent alums … or maybe Michigan will always be this strong, who knows, but the arrogance of the assumed at some point has to intersect with the reality of the known. 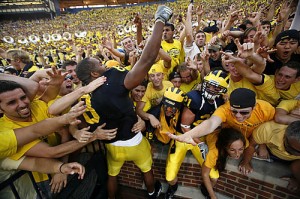 New seating procedures in the student section have nullified upperclassmen rights to the premium seats, and they aren’t thrilled. Joyous players dancing with fellow seniors in the front row might be a thing of the recent past at Michigan Stadium.

The product on field has been wretched since Lloyd Carr left, and certainly that’s part of it. Michigan has been playing football long enough to have a segment on Ancient Aliens done about it, and is the most successful program in the history of the collegiate version of the sport.

And somehow, since Carr retired in 2007-’08, the football program has seen its worst season ever, the burial of its national bowl appearance streak, the two worst statistical defensive seasons in its history, and now a sexual assault situation that, depending on whom you talk to, was dealt with under the law at the time or a hideously insensitive cover-up to protect the football program.

The truth is always somewhere in between the zealots, but it’s a bad look for the program when the evidence of a sexual assault leaks and the guys allegedly involved have continued playing football as key cogs in the machine.

All of this portends to be a big year for the program, one hedging its bets on its impenetrable brand.

On the field has been questionable. Off the field has been a mess. Alienating students with policies like “first come first serve” and “losing … but hey … ticket price hikes are coming” are death knells eventually, no matter how many Resurrection acts the men’s basketball team keeps coming up with.

Upperclassmen at Michigan have been particularly annoyed with not only the price hike but the general seating policy that’s developed, basically robbing them of their reward for having season tickets up in the sticks for a few years for the right to keep purchasing and gaining better seat equity by the time they become seniors. Michigan doesn’t seem to care.

Sadly, the blueprint for building it back always is the same thing. Wins. Problems surround every program and campus, whether they come to light or not … but winning 10 games sort of keeps them (wrongly) on the back burner whereas winning 7 does not. In sports, wins are the cure-all elixir for whatever ails.

Win enough games, and that 23 percent will either be begging to get back in or begging to start coming. That’s just the way it is, and it’s not stopping anytime soon.

But college football fans are the life blood of the program, not the wins or the losses. The Alabamas, Texases, Notre Dames … Michigans of the world, they cannot die in full. Too much traditional equity has been built. Probably. But for the Maize and Blue, it’d be wise to stop pressing that theory so darn hard.