One of the defining characteristics of Kansas State football under head coach Bill Snyder is that the Wildcats are regularly in the right position. They might not be the most athletically imposing team in the Big 12 — in this or other seasons — but they mix ferocity with precision, applying pressure on their opponents. The constancy of Kansas State’s pressure, the result of being in the right place on snap after snap after snap, eventually gets to the opposition. This is how the Wildcats won the Big 12 in 2012, and it’s why they were the one unbeaten team in league play heading into week 11 of this season.

What happens, though, when a team with superior athleticism — more pure speed on the edges, from more players on both sides of the ball — brings that same combination of energy and crispness to the field?

You get the TCU Horned Frogs, a team that ran the SnyderCats out of Fort Worth on Saturday night.

One week after a long in-conference commute to West Virginia (ask the Mountaineers how their journey down to Austin treated them this past weekend) and a draining road win over Dana Holgorsen’s team, TCU could have been mentally flat. The Horned Frogs could have allowed their minds to dwell on the previous week’s conquest, to admire what they had achieved in a daunting road environment.

Great coaches don’t just get their players to move past difficult losses. Great coaches convince their players to mentally turn the page after significant accomplishments as well. TCU, with Kansas coming up the following week, was so close to completing a long push through the meaty part of its Big 12 schedule. With the promise of a 10- or 11-win season so close to being fulfilled, TCU — like hundreds of college football teams through the centuries — could have let down its guard in November, squandering an opportunity precisely when it was very much within reach.

Gary Patterson, a truly great coach, would not allow his team to lose focus — not now. Not with TCU about to affirm its place at the top of the Big 12. 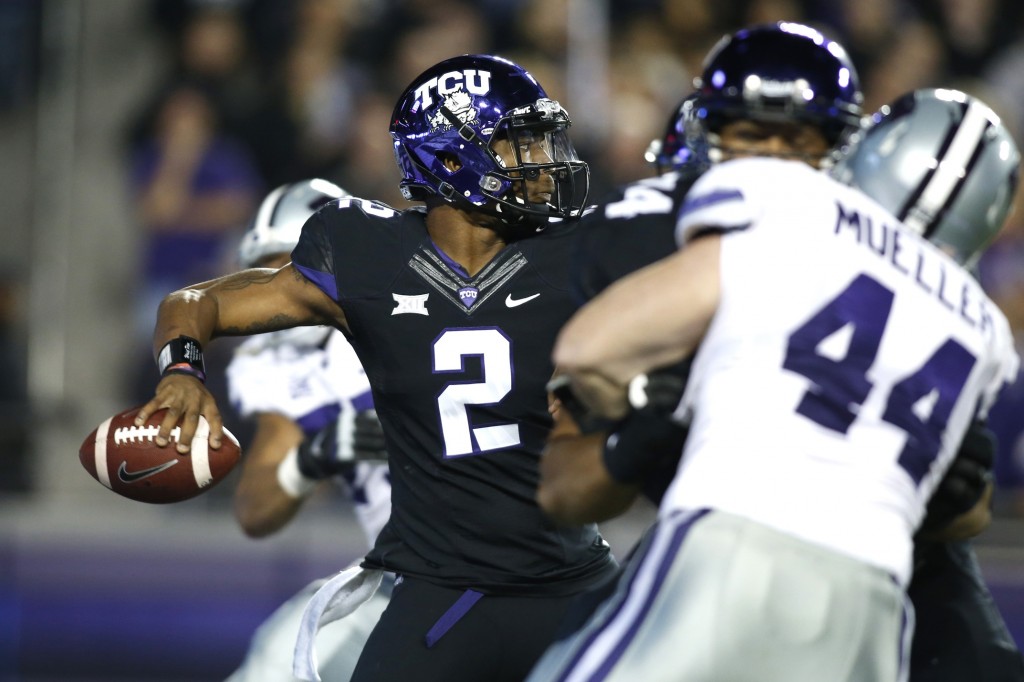 One week after his worst game of the season, TCU quarterback Trevone Boykin operated at the height of his powers. His ability to put all the pieces together in 2014 mirrors his team’s ability to do the same.

You know the general outlines of the TCU football story over the past 20 years. Yet, this victory over Kansas State — by giving the program an excellent shot at finishing the season 11-1 — enables the Horned Frogs to register yet another milestone in their climb up the college football ladder.

You know that TCU was tossed around in the high seas of conference realignment ever since the Southwest Conference died, having to move from the SWC to the Western Athletic Conference… to Conference USA… to the Mountain West… to the Big East… and finally to the Big 12 in 2012. TCU had not known stability, and it was kept outside the power conference inner circle for nearly two decades.

Yet, Patterson forged ahead. He made the best of a limited situation, guiding TCU to a win over Wisconsin in the 2011 Rose Bowl, capping a perfect 2010 season. In 2009, TCU finished just a whisker behind Texas in the chase for a BCS National Championship Game spot opposite Alabama. Patterson took TCU to the greatest heights outside the Power 5 conferences.

When TCU finally gained admittance into the Big Boys’ Club, the Horned Frogs were knocked back. Life in the big time seemed to throw Patterson’s program for a loop. One offseason after another witnessed a combination of suspensions, players quitting football, or players withdrawing from the program. This past summer, Devonte Fields — who was supposed to make TCU’s defense a next-level force due to his pass-rushing prowess — was suspended and then separated from the school for his alleged involvement in the assault of his ex-girlfriend. It was just the latest incident in which TCU administrators did the right thing… but the football program seemed to have absorbed a major blow, a setback that was going to keep the Frogs from jumping to the top of the Big 12.

As long as these incidents kept recurring, the question appeared likely to linger: When would TCU ever feel at home in the Big 12?

With this thumping of Kansas State, one week after the nine-point fourth-quarter comeback at West Virginia, we don’t need to wonder anymore.

Trevone Boykin played poorly versus West Virginia. Against Kansas State, he was nearly perfect, running and throwing the ball with decisiveness and flair to keep the Wildcats’ normally sound defense off balance.

Star running back B.J. Catalon was out with an injury, but Aaron Green stepped into Catalon’s spot and merely ran for 171 yards on 18 carries, frequently undressing Kansas State defenders who normally make sure tackles in open-field situations.

The Frogs excelled in all phases of play and drummed a very good Kansas State team out of the College Football Playoff.

Over the past month, plenty of commentators have understandably talked about the possibility of the SEC getting two teams into the playoff. With TCU and Baylor both passing huge tests on Nov. 8, it’s time to begin to entertain the possibility of two Big 12 teams crashing the dance that will start on New Year’s Day.

Gary Patterson has finally found a conference home, one with more power and prestige than ever before. However, power and prestige don’t matter much if they’re attained and kept by the Oklahomas and Texases of the world. TCU didn’t just want to share in power-conference revenue in the Big 12. It wanted to be at the center of the conference’s story. That was the one mountain Patterson had yet to climb.

He has certainly climbed it now… and he has a chance to move even higher before this season is done.