Brian Kelly said all the right things after Notre Dame barely got by Virginia on Saturday, but staying positive doesn’t magically makes things better. Situations don’t improve simply because someone might want them to.

The Fighting Irish brought a pretty high set of expectations into the season, and the public also expected much of the team — with good reason, too. One of the best defensive fronts Notre Dame has had in years was in place. A plentiful pool of talent existed at running back. Malik Zaire seemed like a step up from previous versions of Fighting Irish quarterbacks.

Now, however, like Casey Affleck, those expectations are gone, baby — gone.

Instead of dissecting this issue in terms of its possibilities, look at it logically: Notre Dame has lost its starting running back and starting quarterback in back-to-back weeks. Only Arkansas and perhaps one or two other teams have been similarly ravaged by injuries through two weeks of competition.

Moving forward a lot of focus will be on DeShone Kizer. The redshirt freshman did just enough at the end of the Irish’s win over the Cavaliers to make people buy the idea that he can capably fill the void left by Zaire’s fractured ankle. Fans being sold on Kizer is predictable, but Kizer becoming “the answer” under center is unlikely, too.

There’s a reason Zaire was the starter and Kizer was the backup. In fact, going back to spring practice when Notre Dame still had Everett Golson on its roster, Kizer was a third-string quarterback turned glorified second-stringer. Only now is he an “oh my goodness, he’s the starting quarterback” leader for the Fighting Irish.

To be fair, this is not some bum off the streets. A four-star prospect coming out of high school, DeShone Kizer has plenty of desirable skills. While no single ability seems (although we have such little tape on him to say anything else) as strong as Zaire’s, Kizer is a rather dynamic playmaker. He has a strong arm and also has the ability to scramble — two attributes Zaire was already providing the team.

No matter. The college football community will find out pretty quickly about the gap of talent between Zaire and Kizer. There will be no tune-up games for the redshirt freshman. With a whopping 13 career pass attempts, the Irish will have to rely on Kizer’s arm in a huge game on Saturday when they host a good Georgia Tech team. Kizer will be thrown right into the fire on the 19th.

Yes, there are reasons to be somewhat optimistic if you are an Irish fan. Zaire wasn’t exactly setting the world on fire when Notre Dame was struggling to put away Virginia, and when called upon Kizer stepped up to the plate, hurled a ball 39 yards for a score, and left some Virginia fan dead… 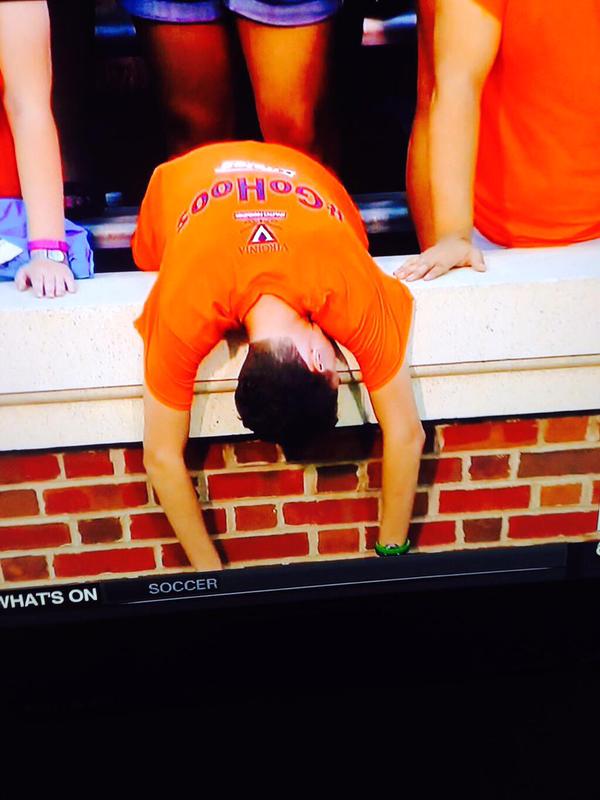 Reality needs to be put in perspective, though. Sure, Brian Kelly said after the game that the Fighting Irish are College Football Playoff contenders even without Malik Zaire calling the plays, but what else did anyone expect him to say two games into their season? Would you have preferred he said something like, “Holy smokes, guys. We are fudged. Really, really fudged. Like, man, what in the hell are we going to do now that we’re relying on our spring practice third-string quarterback?”

If Notre Dame wants a chance to succeed going forward — or at least until it finds out how good/dynamic/spectacular Kizer can or can’t be — it will have to rely on the delightful surprise which has been C.J. Prosise, who is also in a position no one could have predicted going back to Notre Dame’s spring practices.

Prosise is a safety turned slot receiver turned experimental spring practice running back turned a guy who is never tackled after first contact and seems to have the vision of a guy who has been playing running back for a decade. Brian Kelly will need to continue to give Prosise carries — so much so, in fact, that the Irish’s offense might look drastically different going forward.

The thing is, even if Kizer ends up being as dynamic a quarterback as Zaire, Kelly will have no other options than changing the offense a little bit. Notre Dame can ill-afford Kizer going down to injury, so the zone-reads Zaire had been so spectacular in using whenever Kelly implemented them in games are not going to be as much an option going forward — not if Notre Dame wants to prevent plucking a dude from the stands to play QB in a few weeks.

All in all, as it is with many other college programs throughout the country, the Notre Dame team people thought they were getting going into the season already looks drastically different after a mere two games of the 2015 season.

Going forward, it will be up to Brian Kelly to adjust properly, make adjustments, and find out what he has in Kizer.

As for Kizer, it will be up to him to rely on his running game to drive the offense, not turning the ball over and giving Notre Dame’s defense a chance to thrive. Kizer will try to develop as quickly as possible and become a value-positive presence on a roster otherwise filled with good-to-great tlaent.

Finally, it will be up to college football fans (most importantly Notre Dame fans) to alter how they view the Irish going forward. No, this wasn’t going to be your grandfather’s ND anyway, but they’re not even your children’s ND anymore, either. They are something else. What exactly? I am not sure that’s something anyone can answer with airtight certitude.

Until we all figure it out, which can come as early as next week when the Irish face Georgia Tech, let’s all simply chill, lower expectations a bit, and let events play out as they may — after all, they all look the same when the light goes out.

Joseph has covered college basketball both (barely) professionally and otherwise for over five years. A Column of Enchantment for Rush The Court on Thursdays and other basketball stuff for The Student Section on other days.