There were a lot of great coaching hires this offseason: Bruce Pearl got a second chance at Auburn; Virginia Tech hired Buzz Williams, one of the best coaches in the country; and Wake Forest hired up-and-comer Danny Manning.

In order for those jobs to open, however, someone usually has to get fired. The hot seat is omnipresent in the college basketball world, and in today’s climate where programs demand immediate success, it’s easier and easier to come up with ten names for such a list.

Gregory won 20 games in each of his last four years at Dayton before taking the Georgia Tech job, but has finished over .500 in only one season in Atlanta. Gregory has dealt with some high-profile transfers (most recently Robert Carter, Jr., who transferred to Maryland) who did not pan out, and some elite recruits (Solomon Poole) who have not yet flourished. The fan base seems to both genuinely like Gregory and want him out as fast as possible. Yellow Jacket fans will likely get their wish after this season.

A bit of a shock entry, Tyndall was just hired to replace Cuonzo Martin, who left Knoxville for Cal. However, recent reports that the NCAA is investigating Tyndall for potential violations at Southern Mississippi will likely have the Tennessee brass skittish, given what happened to Bruce Pearl while he coached in Knoxville.

Travis Ford could be making this face a lot in Stillwater this season.

Oklahoma State was supposed to challenge Kansas for the Big 12 title last season, but finished eighth. With Marcus Smart and Markel Brown gone, as well as the transfer of Stevie Clark, Oklahoma State is now basically Le’Bryan Nash with some Phil Forte mixed in. Another finish at the bottom of the pack in the Big 12 could leave Ford looking for work.

How did we make it this far without discussing Crean? After grabbing a top seed in the 2013 NCAA tournament, Indiana finished just 17-15 last season, and the Hoosiers have had to deal with suspensions, and most recently one teammate hitting another with his car (seriously, that happened). Crean is often teased for things like handing out rings to his team after making the Sweet 16, but more importantly, he hasn’t delivered on-court results other than a two-year run while in Bloomington. These recent off-court troubles could mark the end for Crean in Indiana.

A 20-win season in 2014 probably bought Brownell some more time, but the Tigers haven’t made an NCAA tournament since 2011, and finished second to last in the ACC in 2013. Another strong or middle-of-the-pack showing will likely keep Brownell around, but another bottom-of-the-league finish could see him hitting the unemployment line.

Fox made a surprising run to the 2011 NCAA tournament, even though Georgia went 9-7 in the SEC that season. However, he has finished inside the top 60 of the Pomeroy ratings only once. Georgia managed to finish third in the SEC last season, and the league’s weakness could keep Fox employed, but the Bulldogs have much more often finished in the middle or bottom of the pack during Fox’s tenure. With the school a short drive from three things — Atlanta, its recruiting pool, and the results a strong class can offer — the Dawgs should be much better than they are.

Purnell is just 9-57 in conference play in his tenure at DePaul, and with the Blue Demons expected to finish near the bottom yet again, this will likely be his last stand. Purnell gets a bit of a pass from me because the program is so awful, but he likely should have been fired after last year. This year looks like his last.

Chambers began in 2011, but in three seasons at Penn State he hasn’t finished over .500 once. Penn State’s brass might give him a fifth year to turn things around, but with prospects bleak after losing their best player, the Nittany Lions are likely to end up in the lowest tier of the Big Ten again. Chambers will probably be gone. 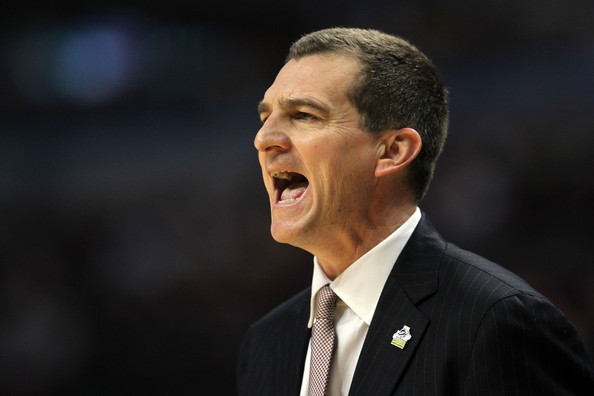 Turgeon has had to deal with some transfers as well, and he hasn’t made an NCAA tournament since making it to College Park. Leaving the ACC would usually be good for your NCAA tournament chances, but unfortunately for Turgeon, he has to now try to compete in the Big Ten. Navigating a new conference, plus the travel difficulties, will leave Turgeon with an uphill task.

Anderson hasn’t made an NCAA tournament at Arkansas, and if the Hogs don’t finish in the top three or four in the SEC (as they should) this season, Anderson is a darkhorse candidate to get fired. It’s also worth watching the recruitment of Arkansas native Malik Monk. If he spurns Arkansas for either Kansas or Kentucky, that could be the final nail in the coffin.