Today is September 11. It is a day I will never forget for the rest of my life, and I am sure you can probably say the same.

Everybody has a different way with remembering what happened that Tuesday morning in 2001, as well as the events that unfolded as the week went on. Most autumnal events in my life just happen to have a football tie to them in some capacity. I remember Penn State’s Thursday night game at Virginia being postponed that week as the sports world largely shut down. I remember that game in particular not because I was an enthusiastic and loyal supporter of Penn State, but because my high school quarterback (Matt Schaub) was playing for Virginia and I was the self-appointed president of the Officially Unofficial Matt Schaub Fan Club. (I still am if anyone would like to join.)

Now here we are, 13 years since those horrific attacks in New York, Washington D.C., and above the skies of western Pennsylvania. Sports go on without hesitation, as they should, but teams still find ways to pay tribute to the nation, its victims, and those in the armed forces and civil services.

Tonight, Houston and BYU will play a football game while sharing their patriotism on their helmets. Both schools will wear specially-designed helmets for the game. The model for the helmet design is something that has become fairly standard for this type of patriotic helmet: a white helmet with school logo filled with stars and stripes. BYU’s helmet is already white, of course, but the back of the helmet features a logo honoring the victims in the World Trade Center and the Pentagon.

Houston’s helmet follows a similar format, at least on the side:

Virginia Tech is using that same idea for its helmets this weekend after a big win at Ohio State. This white helmet has a stripe down the middle highlighted by the blue field with white stars, but is flanked by a red and white stripe on the sides.

There have been a number of schools that have used this helmet design for their uniforms for various patriotic reasons, from honoring September 11 victims to various military tributes at other points in the season. North Carolina, Louisiana Tech, Southern Mississippi and Louisville have all dabbled in the concept. I still love this Rutgers helmet. Sometimes the idea goes a little deeper with a complete uniform overhaul. For example, Boston College suited up in these in 2012: 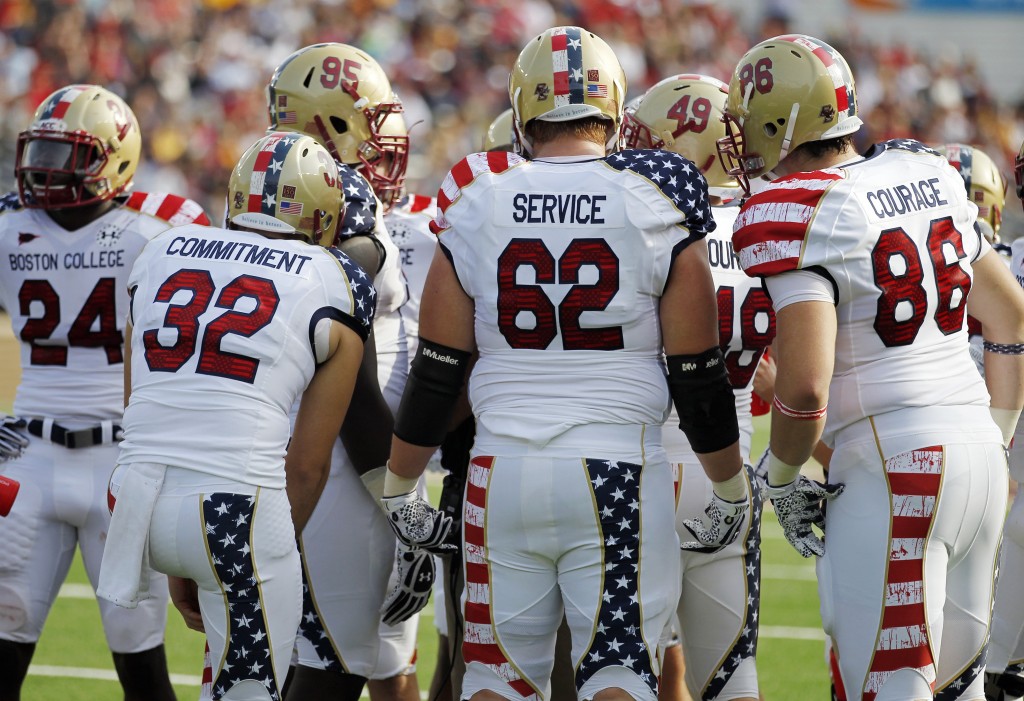 … and Northwestern broke these out last year: 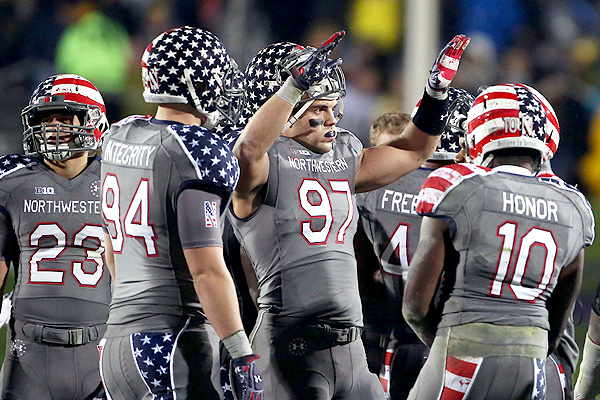 Boston College will offer a different spin on its tribute uniforms this weekend against USC. The Eagles will wear what look to be their regular home uniforms, but with a few alterations to pay tribute to a former Boston College lacrosse player, Welles Crowther. Crowther was killed in the September 11 attacks. As the story goes, Crowther was wearing a red bandana as he helped at least a dozen people in the south tower of the World Trade Center before racing up the stairs to save more. Tragically, the tower collapsed as he continued on his own rescue mission, and he was not one of the survivors. This weekend Boston College’s helmet stripe will be filled with the traditional red bandana pattern, as will the gloves and cleats.

What the players will wear in honor of Welles. Red bandannas will be handed out to the student section. #WeAreBC pic.twitter.com/8HJUC31ktr

Then, of course, there is Maryland. With the city of Baltimore celebrating the 200th anniversary of the Star-Spangled Banner, Maryland is using the opportunity to celebrate the extension of the school’s relationship with uniform partner Under Armour. The Terrapins are doing it in style too, with a specially designed uniform that plays off the anniversary of the national anthem, with the lyrics painted on the shell of the helmet and an outline of Fort McHenry taking the place of a logo. It is mere coincidence Fort McHenry looks like a turtle. It is beautiful.

Some people will be turned off by the idea of turning a college football uniform into what sometimes comes off as a “We love America more than you” agenda. Not I. Sometimes, I may be as hardcore a traditionalist as there is when it comes to uniforms, but when it comes to using the uniform to pay tribute to this nation, I’m all for going all-out with the red, white and blue pride.