The Pac-12’s decision to stage a conference championship game at Levi’s Stadium in San Francisco made sense on a conceptual level. The league’s headquarters are located in the city, which is the geographical center of a conference that stretches from Seattle in the Northwest to Tucson in the Southwest and Boulder, Colorado, in the Rocky Mountains.

Only one domed stadium could ever host a Pac-12 Championship Game, and that’s the Arizona Cardinals’ home ballyard in suburban Phoenix. Yet, with the Pac-12 North winning five straight league titles (three since divisions were officially established in 2011), it was always unlikely that Northwest fans would like to make the trip to the desert in early December — after all, what about traveling to the Rose Bowl or the Fiesta Bowl in early January? That’s when a longer plane flight would be more desirable.

The idea looked good on the surface. Everything should have been in place for a great event and a positive result. Yet, somehow, things fell apart.

Such a statement applies to a dud of a Pac-12 title game in 2014, but it also applies to the Oregon Ducks’ 2013 season. That season forms the backdrop for Oregon’s ascendancy this past Friday night in San Francisco against the helpless Arizona Wildcats. 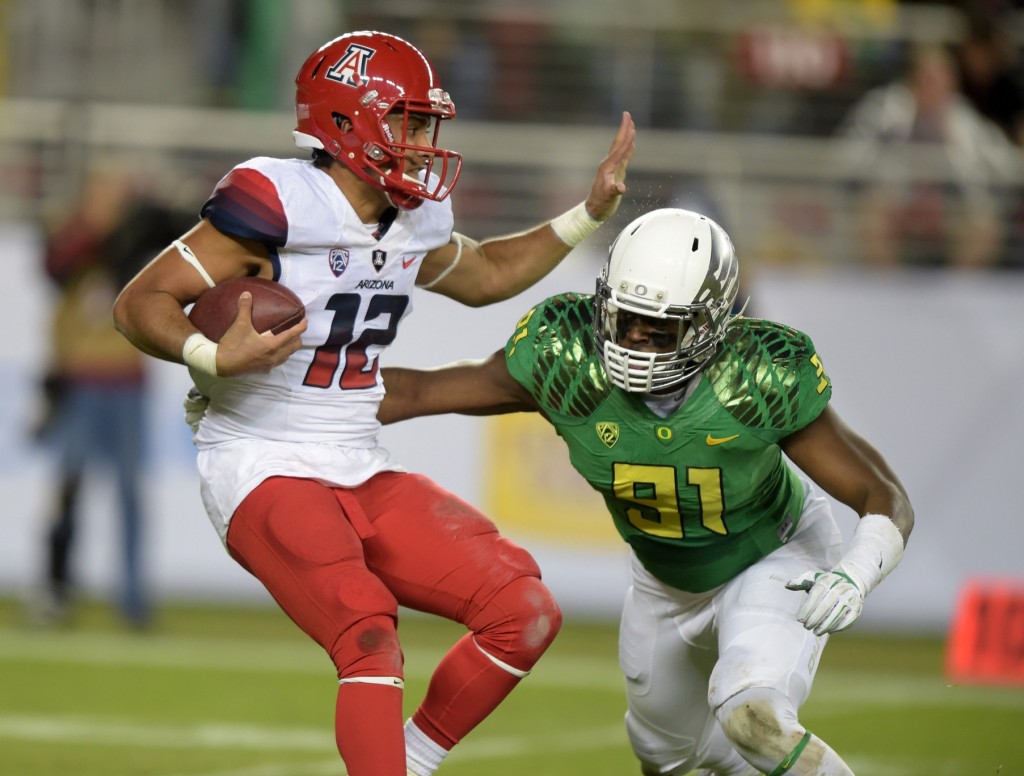 Oregon’s defense, which had been so shaky earlier in the season under first-year coordinator Don Pellum, played what was — adjusted for the opponent — its best game of 2014. The masterclass couldn’t have come at a better time for Oregon, which can now show its stuff in the College Football Playoff, possibly against Florida State if the Seminoles win impressively against Georgia Tech on Saturday night.

Oregon had Marcus Mariota in the saddle in 2013. The defending Fiesta Bowl champions were aiming to take back the Pac-12 title Stanford had taken from them in 2012. The Ducks owned more than enough talent to win the league, but as was the case with the 2014 Pac-12 Championship Game, a great idea never became actualized. Oregon drifted through November of 2013 without purpose, slogging to ugly victories over weak teams and getting pounded by both Stanford and Arizona. Everything about 2013 was supposed to be great for Oregon, but the Ducks fell apart when it mattered.

In 2014, head coach Mark Helfrich and everyone else in the program knew things had to be different.

Friday night, the Ducks — once more and with great feeling — announced just how different they had become. Their 51-13 thrashing of Arizona kept the Pac-12 title in the North yet again (USC was the last team in the current geographical South to win the Pac, in 2008). It also enabled 2013 to recede into history as a moment which taught the Ducks how to compete like champions.

If the 2013 Ducks folded in the face of pressure, the 2014 version flew in the opposite direction. Oregon was fighting for survival in late September and early October. Although the Ducks did lose on Oct. 2 to the same (and yet not-the-same-at-all) Arizona team they so easily handled on the first Friday of December, a narrow win at Washington State kept the team afloat. If UO had not escaped Pullman, Wash., with a victory, the subsequent loss to Arizona might have knocked the Ducks out of the playoff race. The team’s offensive line was ravaged by injuries in the Washington State and Arizona games. When linemen began to return against UCLA on Oct. 11, Mariota did the rest. The Ducks never looked back.

It took a lot of effort and determination to arrive at such a place of mastery, but the Ducks have certainly soared since their loss to Arizona. They entered the Pac-12 title game having scored at least 42 points in their last seven games. They had won by at least 12 points in all of those games, and in the 12-point win (over UCLA), they had led, 42-10, early in the fourth quarter. Oregon’s 2013 path was defined by the uncertainty of a coach in the face of a brokenhearted team, one that failed to move on from the previous week’s setback. The 2014 team chose to learn from that experience instead of merely sulking about its fate.

The story of the 2014 Oregon Ducks will contain a long and colorful chapter on the College Football Playoff. The history books will note that the Ducks became the first team to qualify for the inaugural edition of the event. Yet, when the story of these Ducks is ultimately authored, the centerpiece of the tale will be the work of three men: the second-year coach who is trying to fill Chip Kelly’s very large shoes; the first-year defensive coordinator trying to replace Nick Aliotti; and the quarterback who finally seized the Heisman spotlight before he moves on to the pros.

Helfrich knew that after 2013’s failures, he had to take advantage of Mariota’s return in 2014. For the good of his own career and the good of the UO program, Helfrich had to deliver the goods. He faced searing pressure and withering scrutiny — not unfairly, but as a natural extension of a job at a school that’s expected to win big. Helfrich, more than anyone else at Oregon, had to instill a better competitive mindset after watching his team drag itself — gut-punched and listless — through the final month of the 2013 season. Oregon’s relentless consistency over the past seven weeks showed how much Helfrich — not just his players — had grown.

Pellum watched his defense struggle for extended portions of this season, and it was certainly not focused against Arizona on Oct. 2 in Autzen Stadium. While Chip Kelly got most of the credit for the Ducks’ previous successes, it was Aliotti’s defense which did enough to put Kelly’s offense in good positions.  Similarly, even though Oregon’s offense was the star of the show in Eugene over the past few months, Pellum’s defense gradually got better. That progression offered yet another look inside a program that discovered toughness in 2014.

Finally, Marcus Mariota — a player who knew how high the stakes really were for himself and his program at the start of the season — stood at the center of Oregon’s successes as well, chiefly by guiding the team through the rocky first half of its season. Leading by example more than words enabled Mariota to see the championship stage before moving on to the pros. He, too, learned the right lessons from 2013 instead of cursing that year’s results and failing to see how they might have possessed some value for himself and his teammates.

Coaches and players both demonstrated a great deal of maturity this season. That’s why the Ducks were able to gain a rematch with Arizona, for a conference crown and that one glittering goal of a playoff berth.

When given that single opportunity on Friday night, the Ducks did not disappoint. 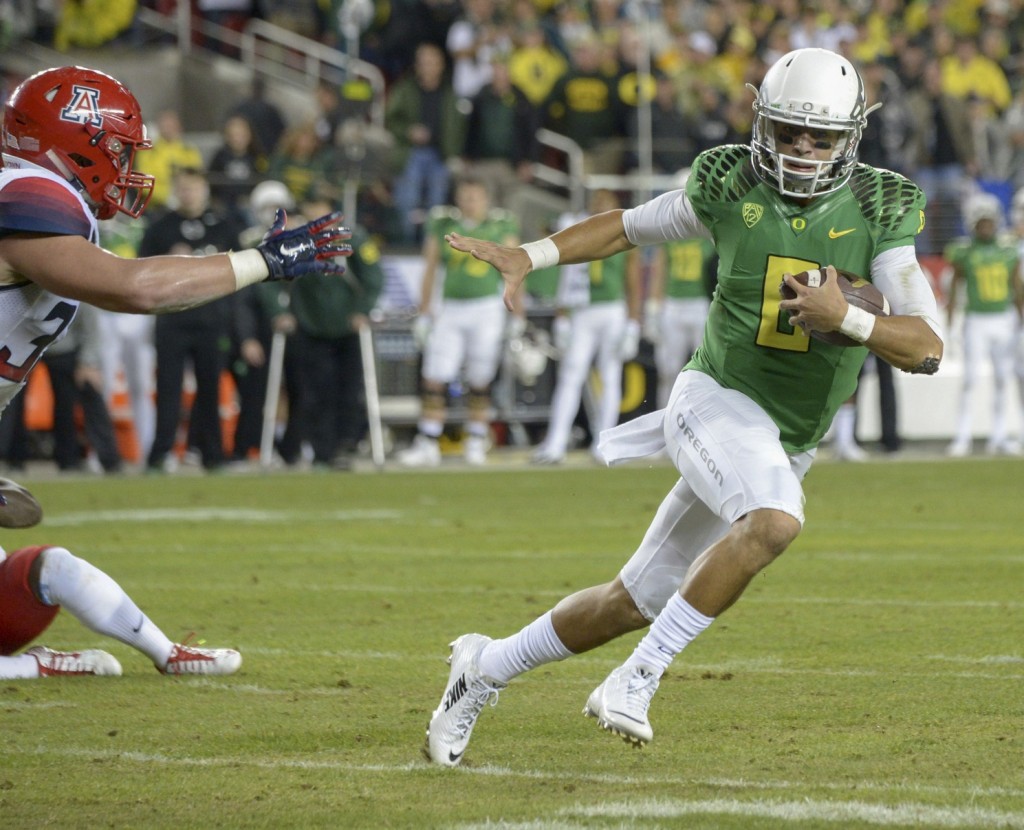 That looks a bit like a Heisman pose, does it not? Marcus Mariota was average in the first half but genuinely great in the third quarter. He was, on balance, a moderately above-average player in this game. Wisconsin’s Melvin Gordon will get the final say in the Heisman race on Saturday night versus Ohio State in the Big Ten Championship Game.

Heading into Friday, Arizona certainly had a chance to make the College Football Playoff if it could have beaten Oregon again… but how many teams could ever beat the Ducks twice, both times away from home? Oregon had to love it last Friday when the Ducks’ rival, Stanford, bumped off UCLA and enabled UO to face Arizona in this Pac-12 pigskin showcase. Had UCLA played Oregon, the Ducks wouldn’t have been the seekers of revenge, but the team trying to withstand the Bruins’ all-out assault.

Much as it was psychologically easier for Alabama to play the 2012 BCS National Championship Game rematch against LSU as the team which had played poorly the first time, so it was also the case with Oregon against Arizona in 2014. The team which had all the answers the first time around was not able to find anything at all in this neutral-site reunion.

Oregon — baffled, blitzed and banged-up the first time it faced Arizona this season — stood on much more solid ground two months later. The Ducks had a healthy offensive line, something they lacked on Oct. 2. Their offense had attained a noticeable rhythm. Their defense had solidified. Their resolve had grown. Their confidence had been built to a great height.

Much like LSU in the 2012 BCS title game, Arizona had nothing new under the sun to offer Oregon. The Wildcats threw and landed their best punches in the previous meeting. On Friday night in San Francisco, all the energy and creativity in the contest came from the team which had a lot more to prove: the team wearing Oregon green.

After outgaining Arizona by 403 yards; outrushing the Wildcats by over 300 yards; converting 9-of-18 third downs; gaining 21 more first downs; and committing zero turnovers, the Ducks had proved their worth. If 2013 brought about a feeble finishing stretch for the Ducks in Helfrich’s first season as the program’s head coach, the 2014 season acquired the exact opposite trajectory. When the going got tough for Oregon last year, the team shriveled.

When this season’s Ducks faced adversity, every player and coach gained strength and managed to show it on the field. How else could one explain a team that so thoroughly throttled its conqueror in a moment of suffocating pressure?

Oregon gained revenge against Arizona, yes. However, the Ducks gained something more precious than that prize and the Pac-12 title which accompanies it. Oregon made college football history by becoming the unofficial first recipient of a playoff berth. The knowledge that this team was so frail a season ago makes this landmark occasion that much more satisfying for everyone associated with the program.

If Oregon can sustain this level of toughness in the Rose Bowl on Jan. 1, the Ducks could find themselves in the national championship game when the second week of January arrives.