If you go through The Student Section’s coverage of the month of September, you will see very little content about the makeup of this year’s football version of a “final four.” You will see no official projections of the College Football Playoff’s four-team field. You will see no bowl projections or top fives in the Heisman race. (That’s going to start later this week, as contributor Kevin Causey rolls out his Heisman Poll for us.)

There’s a damn good reason you didn’t find a lot of gazing into the crystal ball in September here at TSS: A college football season is a seductive mistress. It shows off so many appealing aspects of its larger personality, leaving you begging for more, more, more. The product you saw on the field Saturday, especially in the epic (yes, the word genuinely applies here…) 3:30 Eastern game window, proved to be so utterly intoxicating that you’d never, ever consider the notion that another regular season on God’s green earth could even begin to compete with the one owned by college football.

If we could have 52 Saturdays a year like that — not just 15 or even three — we would know, as we make our way through lives that sometimes soar but are often sluggish and shrouded in gray, that we would always have an escape from the tedium and stress that mark our work lives and, at times, our home lives.

There’s another powerful way in which college football seduces many of us, and the Bowl Championship Series — with its surface pretense of formulaic accuracy — lulled a lot of people into this trap: The sport makes you think that you’ve figured out the season well before it has run its course. You see certain brand-name programs lose in September or early October and think that team is dead. You ignore the team that is quietly going about its business in the first month of the season, the team that then strikes midway through the campaign and vaults to the head of the pack. You’re so intent on judging teams and resumes after one month that when the flow of results changes, everything has to be re-evaluated regardless of the brand name (or lack thereof) on the front of the jersey.

In the 2013 season, Oklahoma looked like a sitting duck in the middle third of the season but found a rebirth in late November and early December. Auburn surprised just about everyone with its November finish. The Tigers were simply not a talking point in early October. USC couldn’t tie its shoelaces in September, fired its coach… and then made a charge at the Pac-12 South crown before falling short. Missouri exploded onto the scene in October and became one of the year’s signature surprises.

If you think that what’s transpired to this point in the 2014 college football season gives you enough evidence to offer a definitive verdict on the teams competing for the playoff, go right on ahead. Just know that many more changes await, changes that will significantly alter the composition of various contenders’ (and conferences’) resumes. That’s why you haven’t seen many playoff discussions or postseason projections here at The Student Section. It’s also why I wrote this piece yesterday on the Big Ten’s new outlook.

How to make sense of the incredible weekend we just witnessed in college football? It’s better to respond with fresh questions instead of firm answers.

THE QUESTIONS SHAPE THE SEASON RIGHT NOW, NOT THE ANSWERS 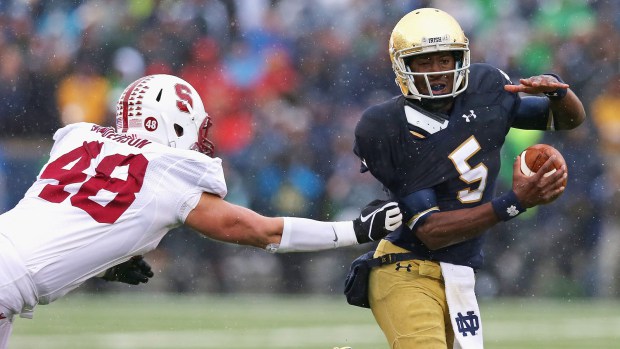 Question No. 1: If Everett Golson and Notre Dame lose to Florida State but win the rest of their games, will their 11-1 resume get the Fighting Irish into the College Football Playoff?

There are too many plot twists left in the road at this point in a college football season, especially one marked by the volatility of week six. This past weekend pointed to a level of chaos reminiscent of the nutty 2007 campaign, in which almost everyone got tagged with two losses. (The Kansas Jayhawks, that noted football powerhouse, somehow lost only once, making them college football’s “2014 Kansas City Royals” in 2007.)

College football dares you to think you can figure it out in six weeks, but the story of this season and the personalities of the teams vying for big prizes are only beginning to be understood. Moreover, teams such as Baylor and Ohio State and UCF remained mysterious heading into their bowl games last season. There will almost surely be a few equally prominent examples this year. You might want to marry college football after the weekend fling you just enjoyed, but if you’re convinced that your team is playoff-bound and that your rival is guaranteed to be crying bitter tears come Thanksgiving, just know that you might want to divorce this sport in a month when everything takes a wrong turn. You might like the relationship you have with college football, but if one week’s thrilling seductions give way to a gut-punch later in the season, don’t say you weren’t warned.

Without further ado, here are just some of the many questions that will shape the remainder of the season, the first one being mentioned in the caption to the Everett Golson photo above:

Just how good will the SEC West prove to be?

LSU is a mess right now. Arkansas gets a crack at Alabama in Fayetteville, offering the Razorbacks a chance to immediately show that they’re a real force, not a pretender. Alabama itself must show some staying power, or it will fall to the middle of the pack, believe it or not. Mississippi State’s home game against Auburn has “game of the year” significance attached to it, but those two teams have plenty more tests following their showdown in Starkville. Ole Miss has to back up its win over Alabama with a strong performance at Texas A&M in order to be seen as a top-tier team. The Rebels are an upper-tier team, but top tier? That’s a separate, nuanced classification.

The SEC West has a better collection of teams within its own parameters than you’ll find anywhere else in the country. That’s true at this point. Yet, there are signs that this division could become a lot more differentiated than previously thought. We’ll just have to wait and see, which is — as you can tell — the one mantra this piece wishes to convey above all else.

The important question lurking beneath this surface question about the SEC West’s quality: If various conference champions in the Big 12 and Pac-12 have two or three losses, and the SEC West produces what are seen as superior teams, would the SEC West’s second-best team be able to sneak into the playoff as the fourth seed with two losses? That question is on the table — it might not ultimately be needed in late November, but it’s certainly worth asking now so that committee members are ready to give the matter a sufficient amount of thought.

Can a lauded quarterback lift his struggling team above the fray and into the playoff? 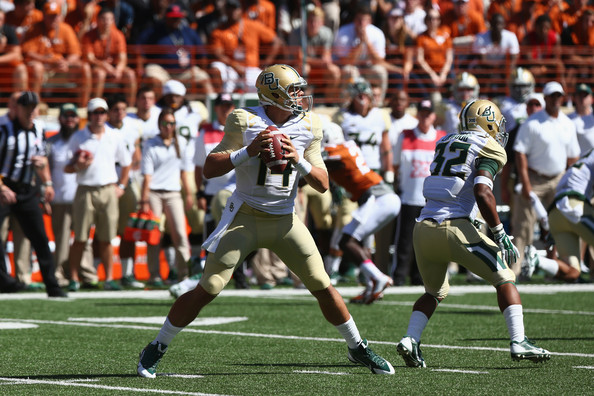 Bryce Petty and the Baylor offense struggled far more than a lot of people expected against Texas. He will need to be great if Baylor is to make the College Football Playoff.

These are all gifted quarterbacks, but to some degree, they’ve all encountered rough sledding this year — Hundley more than the others. More to the point, all three of them endured very difficult and frustrating games this past weekend. With so many games left to play, the situations at Baylor, Oregon, and UCLA feel like case studies in which the quarterback has to put on his Superman cape if the season is going to become something special. This Saturday’s Oregon-UCLA game could feature 20 combined sacks, given the swiss-cheese nature of the two teams’ offensive lines. Mariota and Hundley will have to demonstrate survival skills at the highest level. Even more than Petty, they’ll have to show off a supreme level of resourcefulness over the remainder of the season if their teams are going to somehow make the playoff.

As a final note on this particular question, how Mariota and Hundley handle their seasons will therefore play a large role in determining if the Pac-12 gets a team into the playoff.

Will The American have a huge controversy on its hands two months from now? 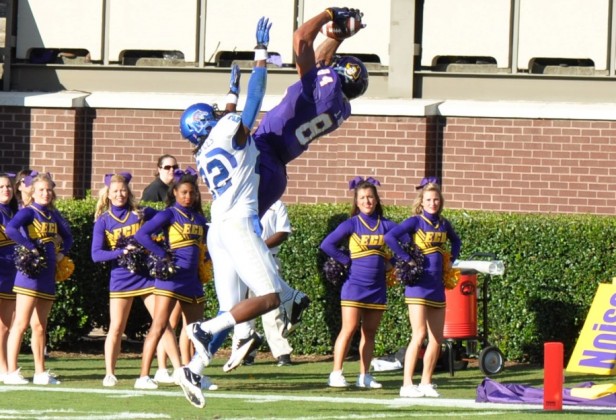 Memphis and East Carolina played each other in Conference USA, but they’re not scheduled to play this year in The American. That could create a nasty situation if the Tigers and Pirates are the two teams left standing in the conference, atop the so-called “Gang Of Five,” otherwise known as the five non-power conferences whose best champion will get a top-tier bowl bid.

As far as the Gang Of Five is concerned, the Marshall Thundering Herd are calmly taking care of business. They’re likely to be in the hunt as long as they run the table — that reality has not changed through six weeks. Where the Gang Of Five becomes very interesting, and potentially problematic, is that the two best teams in the group at the moment, Memphis and East Carolina, do not play each other in The American.

What’s wickedly ironic about this situation is that when the season began, a lot of pundits were worried that there would be a Gang Of Five problem due to the fact that two other American adversaries, Cincinnati and UCF, did not play each other (for the second straight season). Yet, in a sign of how insane this season has been, the Memphis-East Carolina no-play dynamic is the one that could lead to a bitter dispute if these teams finish tied at the top of The American’s standings with no more than one conference loss apiece.

Other questions of note include — but are hardly limited to — the following:

A) How much will Wisconsin, Penn State, Northwestern, Nebraska, and Rutgers (yes, RUTGERS) be able to lift the Big Ten’s schedule strength to the point that the Ohio State-Michigan State winner can feel safe about playoff inclusion?

B) Will Clemson run the table?

C) If Clemson doesn’t run the table; Florida State loses to Notre Dame; and the Irish go 12-0, how will the playoff reality look for the ACC?

D) Will Oklahoma beat Baylor? If the Sooners do, we could be staring at a messy two- or three-team tie by season’s end in the Big 12. Won’t THAT be fun?

E) We’re a long way from this point, of course, but how would a 12-1 Arizona team stack up in a playoff comparison with other one-loss conference champions? Let’s ask the question, even though it might not be needed in late November.

F) Flowing from question E above, will Mississippi State and Arizona and other non-brand name teams be evaluated on the merits of their resume, or would an 11-1 Notre Dame team get the nod in a playoff committee discussion because of a felt underlying need to create TV-friendly matchups, even if no committee member would (obviously) be caught dead saying that was the outward reason or justification for such a decision?

The questions mean more than the answers right now, college football fans. What did the past weekend mean? It meant that more chaos is on our way. If you think you’re certain about a lot more than that, well, be my guest.

This sport has a way of turning early-October certainties (beyond the safe ones, such as SMU and Wake Forest being really bad…) into sawdust by the time November rolls around.

It’s in November when you’re going to get serious discussion of the playoff. For now, let’s just enjoy — and assess — an October that’s likely to throw us a lot of knee-buckling curveballs that have zero to do with the Major League Baseball playoffs.