Last year about this time, Nick Marshall not being at SEC Media Days wouldn’t have caused much reaction. Auburn was coming off of a bammies type of year in the SEC, and the national focus was so far from an SEC championship and the hype was being dealt out to other teams in the South.

But mix in a BCS championship appearance, throw in some limo tint, and add some pot residue, and all of a sudden the Auburn quarterback not being at media days was national news.

You could say it was a dropped ball by Marshall getting a citation … and it was … but it was also a missed opportunity for Gus Malzahn on what could have been a fantastic teaching moment. Basically, Marshall should have been there.

This isn’t getting into the logistics of American pot laws, varying degrees of offense by ounce, or the decriminalization of getting the wind. If you want that type of hot take, go take it on the virtual arches on over to The Guardian.

What was lost in Marshall staying home from Hoover was the opportunity. That opportunity being “to teach a lesson.”

All across the land, you, your neighbor, your neighbor’s girlfriend, the guy working the local Marathon station counter … likely get up to go somewhere mandatory that has set a host of ground rules for how you are supposed to act. Some, you might not agree with.

Marshall … being given a healthy amount of money in the form of a scholarship to abide by certain rules … should definitely be reprimanded as such for violating those rules. And that punishment should have been explaining himself to the masses. It’s what grown people do, own up to their mistakes.

But Malzahn is partially to blame here, too. Malzahn should have had his star quarterback front and center facing the media, answering whatever questions are asked or giving a statement as he would had none of this ever happened. 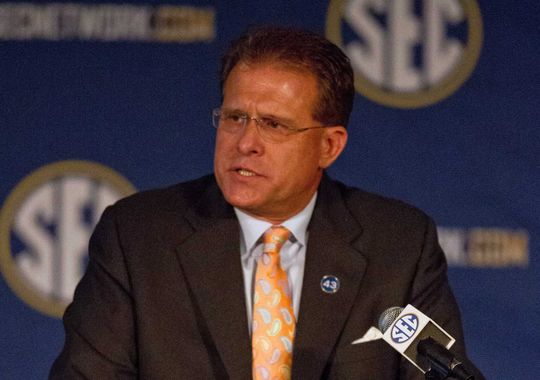 Hiding a player from the spotlight after breaking a rule teaches the player nothing and impedes growth. You make mistakes, you own up to them, you pledge to do better, you either make good on that pledge or bad on that pledge, and we all move on.

Hiding Marshall in the shadows back home does nothing for his growth as an adult. There will be a time where breaking the rules, as divisive or arbitrary as they may seem … is not followed by someone shielding you from scrutiny.

Shielding Marshall in this case makes the story more than it probably should be: “Oh, he’s not here!? We’ve GOT to ask about that … and what this might mean for his season … and if he knew he was doing wrong … and how this affects the rest of the team … and …”

Also, holding him back no doubt will cause a sense of comfort, albeit abstractly. The player knows that he’ll be hidden from public scrutiny and his original schedule altered to protect him if he breaks a law/rule, etc.

No one wins there, and worse yet, no one grows up a little more than maybe they could have. There could have been a silver lining to a mostly overblown story. But rest assured for mistakes in the future, life after the comforts of college won’t likely offer the same padded room.

College is supposed to prepare student athletes for the real world. And the real world doesn’t make you run stairs at 5 a.m. for your mistakes.