Every person who writes about sports faces this fundamental tension in the wake of a game that flows in one direction through three quarters and then takes a 180-degree turn in the fourth: Did the winner win, or did the loser lose?

In these situations, the winner always deserves a certain degree of credit — always. No exceptions. The winner has to do something, and be credited with something, as a reflection of its persistence and pluck. However, always giving the winning team credit is not the same thing as saying that the winning team prevailed primarily because of its own excellence and craftsmanship.

Sometimes, a team can be lauded for staying in the ring and landing a knockout blow just before the final bell in the 15th round… and still be seen as a winner by dint of its opponent’s mistakes. The calculus is always different, because each game is its own story. It’s not as though there’s a rule or a metric for this kind of decision. A case-by-case basis is the only true guideline.

Your mileage might vary, but the verdict here is that on Saturday afternoon in AT&T Stadium, the Arkansas Razorbacks — holding a knife at the throat of the Texas A&M Aggies — lost this SEC West showdown more than their opponent won it. Texas A&M deserves all the credit in the world for not giving up the fight, especially on defense, but this doesn’t mean the Aggies weren’t immensely fortunate to get out of JerryWorld alive. 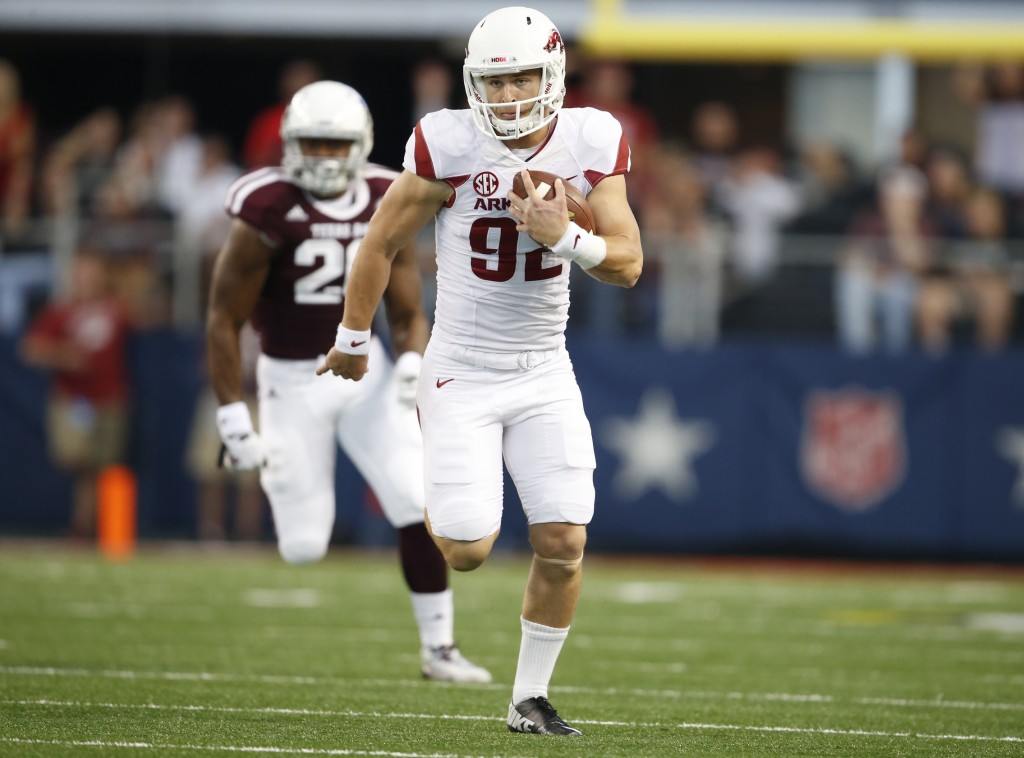 Arkansas’s coaching staff outmaneuvered Texas A&M’s coaching staff for most of the day, as seen on this fake punt for a touchdown. However, Arkansas simply couldn’t make a final decisive play when it had the chance to do so.

This game produced a number of noteworthy stories, most of them reflecting well on Arkansas and not as well on A&M:

In the first three quarters, the Razorbacks looked as good as they’ve ever looked under coach Bret Bielema. Arkansas asserted itself at the line of scrimmage — mostly on offense, but substantially on defense as well. Pressure up the gut rattled Texas A&M quarterback Kenny Hill, who displayed only a small fraction of the cool precision he showcased against South Carolina a month ago. Hill’s candidacy for various awards was knocked down several pegs, a story in its own right. Arkansas’s emergence as a legitimate threat in the SEC West — based on its play through three quarters — gained the notice of the college football community. Even as the Hogs stew over this loss and lament all the things they did to lose hold of a breakthrough moment, they still know they’re a better team than they might have thought a week ago. They at least know they can compete with a relatively solid foe.

However, those storylines — the Hogs’ improvement and Hill’s stalled season — don’t mean very much at all when the scoreboard result doesn’t materialize. It didn’t materialize because Arkansas — which finished the day with eight penalties — committed a personal foul on a touchdown run that would have salted away the game early in the fourth quarter. The Hogs could have been leading, 35-14. Instead, they enabled the Aggies to stay within two scores. After a busted coverage led to an A&M touchdown, that margin became one score, at 28-21.

Arkansas then set itself up for another dagger thrust into A&M’s side. The Razorbacks created a 44-yard field goal attempt with under three minutes left. Had kicker John Henson made the kick, Woo Pig Sooie would have built a two-possession lead (31-21), almost certainly too much for the Aggies to overcome. Texas A&M, with no timeouts left, would have had to score, recover an onside kick, and score again to tie or win. Everyone in the huge stadium knew how big that kick was.

Hill, as shaky as he was on Saturday, and for all the times when the A&M passing game had an open touchdown but failed to complete the play, showed how a leader of an offense handles a frustrating day at the office. He blotted out those memories and delivered a 59-yard strike to Josh Reynolds to tie the game at 28. When given the liberation of overtime and the fresh start it offered, Hill hit Malcome Kennedy for 25 yards on the first play to put his team in front. Arkansas, no longer in a position of strength, watched its offense turn into a feeble group against a surging A&M run defense that in many ways deserves the game ball for the Aggies.

Arkansas opened eyes in this game. The Hogs showed that they’ve gotten better. Texas A&M no longer looks like the swaggering juggernaut it had seemed to be after its destruction of South Carolina on Aug. 28. In so many ways, Arkansas became larger on Saturday while Texas A&M shrank.

Yet, since A&M won and Arkansas lost, those storylines can only retain so much centrality.

Arkansas put itself in position to win. The Razorbacks didn’t take care of the “winning” part of the equation. While the Hogs lament this unfinished symphony, Texas A&M won the kind of game a championship team has to win over the course of a long and chaotic college football campaign.

Arkansas ultimately wrote a lot of good stories in this game. Texas A&M, though, wrote the only story that really mattered.

College football can be that way sometimes.