As we check in with the Arkansas Razorbacks, the question has to be asked:

Did Arkansas announce that it is here to stay with its performance against Texas A&M, or did the Razorbacks set themselves up for a downturn against an opponent that was clearly overrated… or are both statements true?

Two Student Section editors field that question as we try to make sense of one of college football’s more mysterious teams heading into October:

I honestly don’t know. Arkansas is a proud football program, not one that “almost wins” on a neutral field against a ranked opponent and uses that as grist for the mill that they’re “back.” To suggest in a loss that the Hogs are here to stay in some odd way is to devalue the history of that program.

I do think that them sticking a shiv in Texas Tech a few weeks ago probably shows a little more than yakking up a game against Texas A&M, because they probably don’t beat the Red Raiders last year and they flat man-balled them only one year later.

What that shows is that they’re improving, Bret Bielema was the right hire, and they’re on an upward trend. Bielema is a legit coach, and when that hire was made it was one of those “gasp!” moments in Big Ten country, where you have no idea how a guy consistently competing for the conference title goes to the toughest division in college football.

Truth is, it was money, and money is undefeated, which I say almost weekly in some form of a column. Whereas other schools are mired in neutral or don’t know if they’re improving and on a path they want to be on, Arkansas can be sure it is on the right track. 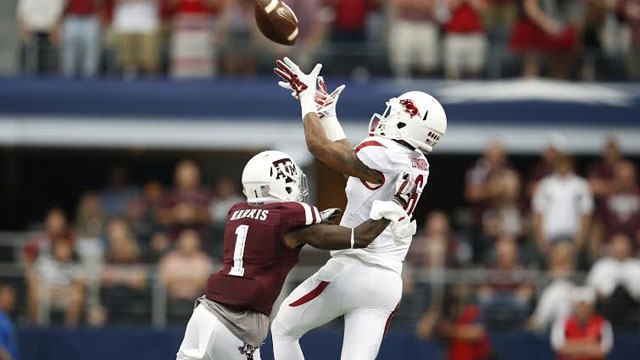 Arkansas is definitely catching up with the competition in the ruthless SEC West. That’s a substantial amount of progress from last season, an indication that Bret Bielema is pulling this program together.

As I always say, September football is volatile and not something to be completely trusted. The month has to be held at arm’s length, especially if a given team hasn’t shown over and over again that it is worth a pundit’s trust. Arkansas is not a program that deserves trust, at least in the sense that every good thing it had created under Bobby Petrino died when he left Fayetteville. This program had to start over under Bret Bielema, so there’s still a large and mysterious cloud hovering over the Hogs.

I would stop short of saying that Arkansas is going to be a nine-win team this year. I’m not ready to say that the Razorbacks are an upper-division SEC West team after their even-steven battle with Texas A&M on Saturday.

However… I am ready to say that this team will be competitive in a cutthroat division for the duration of the season.

It’s not as though Arkansas has a polished, complete quarterback. The Hogs still have so many miles to go in terms of developing their passing attack. That seems like a criticism, but it’s actually a compliment in this narrow context: Arkansas was able to play A&M on relatively equal terms when the Aggies knew the run was coming on most plays. Arkansas’s running game stalled in the fourth quarter, but had the Hogs merely gotten out of their own way — avoiding personal-foul penalties and missed field goals — they would have put away the Aggies much earlier.

This team now looks and feels like a Bret Bielema team. It imposed its presence on Texas A&M. Even though the Aggies are not as good as their opening-night demolition of South Carolina suggested, Arkansas now appears to own a certain degree of heft, something that weighs on opponents and will remain entrenched in Fayetteville. The skill level of the team has to be upgraded, and that’s why the Hogs will stay behind Auburn and Alabama into the future, but we’re not going to see losing seasons again for Woo Pig Sooie… not for quite some time.