The SEC West remains a very tough division. The real issue raised by a number of its losses the past weekend is, “Just how much does an SEC West team’s strength of schedule change in light of week 12’s results?” More to the point, how did the past weekend affect the College Football Playoff prospects of the SEC West’s eventual runner-up, especially if that team (Mississippi State) finishes 11-1?

The Student Section editors discuss this issue, which is quite central to the season and will be front and center if both Alabama and Mississippi State win out.

Auburn, Texas A&M, and LSU all lost this past weekend. How much do these losses change your perception of the SEC West and the SEC at large?

Anytime you enter into a conversation about the overall strength of the SEC or any portion of it and your piece doesn’t begin with, “They should get two teams in the playoff at MINIMUM because football is just different in the South, and if you don’t see that then you’re not qualified to talk about college football, food, women, or anything else ever in the world,” you’re pretty much met with disdain from a host of 14-flag-flying fans whether it makes sense or not.

But as I do with any conference, I try to take measured approaches without giant leaps of hyperbole, which makes most of what I write eternally boring and completely “non hot take.”

So I do that here, too. One salty weekend for the division doesn’t erase really what has happened all season. LSU may look awful now, losing to an Arkansas team that hasn’t won an SEC game since way back when Adam Sandler actually made decent movies (okay, not that long), but the Tigers did beat Wisconsin, which looks like it’ll be one half of the Big Ten Championship Game. I know, I know, Melvin Gordon was hurt. But it still happened. 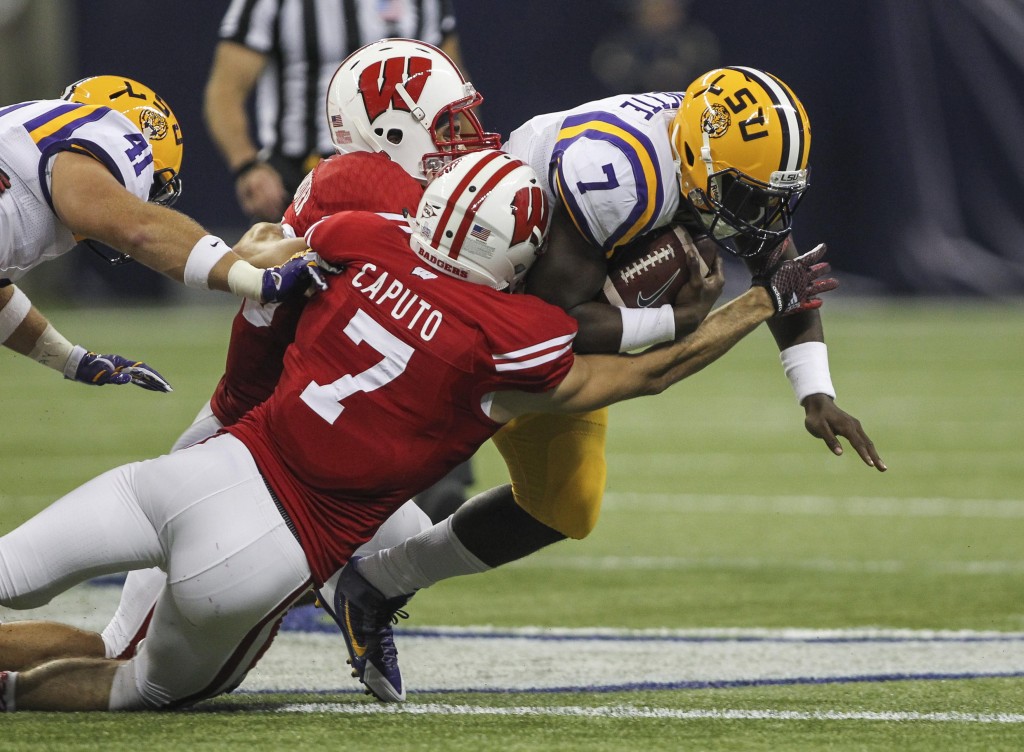 LSU’s win over Wisconsin and Auburn’s win over Kansas State did more to shape perceptions (and resumes) in the 2014 college football season than any other non-conference games. This point cannot be forgotten when a full account of the season is ultimately rendered.

My thought process all along has been that it’s a great division and the best in college football, but shouldn’t get two teams into a playoff. That didn’t change a bit. I think the division is tough enough where if the SEC West winner was unbeaten and lost in the SEC title game to the moribund East winner, you still maybe stick that West team in a playoff, but that’s about as far as I’ll take it.

Alabama to me looks amazing, and there were legit questions about the Tide earlier in the season. They’ve improved markedly. Mississippi State was pretty much who I thought they were, so (pats self on back, pulls muscle).

Auburn’s referendum was the previous week, losing to defensively-eternally-seeking-Cialis Texas A&M. How the committee justified keeping them in the top 10 was the stuff of drunk and disorderly.

What really matters will be what those guys think of it. Auburn isn’t a “great win” anymore, and neither is LSU. Hanging your hat on those wins is nothing that, left alone, should prop you up in the playoff race. I’m not sure at the moment that LSU belongs ranked at all, and Auburn is certainly in the 20s at the very best.

But again, Auburn won at Kansas State and LSU won against Wisconsin, so let’s not rip the SEC West too much. It’s still the most legit division in football, and still should get its one team in the playoff, well deserved.

It doesn’t really change much in my mind.

As I’ve said all year long, the SEC West is one of the toughest divisions in college football. Unlike most other divisions, there’s no such thing as an off-week when you play an SEC West opponent. You either come to play each week or you get your brains bashed in.

With that said, I also warned against people calling it the greatest division of all-time (that distinction belongs to the 1971 Big 8, which finished 1-2-3 in final rankings). While it’s loaded with solid teams, the division wasn’t a cut above everyone else like everyone else was saying. 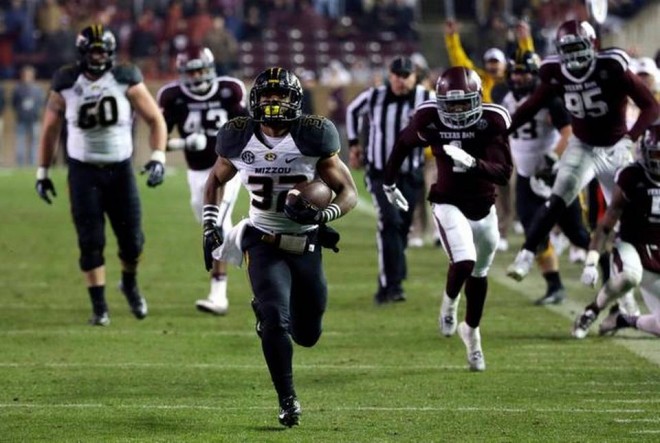 Missouri and Georgia both improved the SEC East on Saturday, showing why the SEC West never really earned the massive hype it received in earlier portions of the season. How this SEC East rebound affects overall perceptions of the conference is a debate that will continue to rage over the next few weeks, especially with the Pac-12 South owning five teams that are all very solid.

This weekend proved that point. Georgia and Missouri beat Auburn and Texas A&M on Saturday, showing the college football world that the gap between the SEC East and SEC West wasn’t as wide as everyone thought it was. In fact, the Dawgs’ landslide victory actually suggests that the teams at the top of the East are every bit as good ones in the West.

It also re-opens the debate about which division is the toughest in college football. While many would think its the SEC West judging by the amount of media attention it receives, it’s worth noting that a 4-3 record is only good for fifth place in the six-team Pac-12 South.

Here’s the issue with the SEC West in general and with the specific notion that the SEC West No. 2 should enjoy the benefit of the doubt in a clash with 11-1 Baylor or 12-1 Ohio State:

The SEC, though ultimately better than other conferences — I don’t think any league has proved itself to be better than the SEC this season — is not THAT MUCH BETTER than the other leagues.

Let’s acknowledge that the SEC East did boost itself with Missouri and Georgia winning. Let’s also acknowledge that Arkansas winning a game helps the SEC West on a certain level, by sparing itself the embarrassment of a team that could have gone winless in conference play (again).

Yet, even though Georgia, Missouri, and Arkansas all helped the SEC, can we acknowledge how much the past Saturday hurt the league more than it benefited America’s best conference? 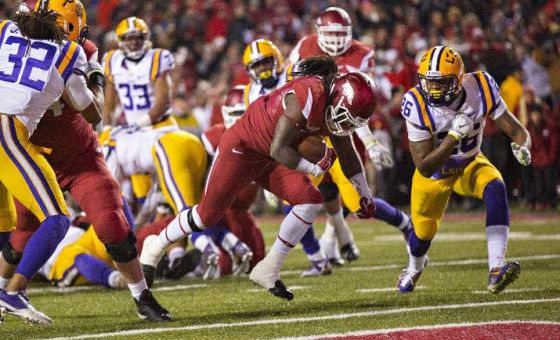 Arkansas busting up the bagel and finally notching a league win is good for the SEC West. Yet, is the value of that forward step greater than the harm done by LSU getting embarrassed? One would like to think that in a balancing of pluses and minuses, the minuses definitely outweighed the pluses in terms of how the SEC West is viewed. With a diminished SEC West, it becomes that much harder to claim that the division’s second-place team deserves to get into the College Football Playoff more than a champion from another league. The difference in resumes is not substantial enough to snub the non-SEC conference champions in the hunt.

Auburn, after losing to Texas A&M, had to burnish its credentials. It did the exact opposite. Auburn must beat Alabama to identify itself as a particularly good win this season. If the Tigers end up 8-4, they are merely a “good win,” sans any extra (positive) adjectives.

Texas A&M, after beating Auburn, needed to show football analysts and pundits that it really had turned the corner. Beating Missouri at home was a prerequisite for that. The Aggies failed. A&M represents an average win for a top-tier SEC team this year — maybe slightly above average, but that’s being very generous.

Then consider LSU. It seemed preposterous that LSU was not favored to beat a team that hadn’t won an SEC game since 2012. Yet, LSU managed just 123 yards in a pitiful performance. Winning in Tiger Stadium is hardly ever easy, but if we’re evaluating LSU as a quality win, the Tigers are good at best, trending toward average.

We are left with an SEC West in which Alabama and Mississippi State might end the season as the only two elite-level teams in the league. Ole Miss would have a case if it can win out.

This is the best league in the country, but again, is the difference THAT PROFOUND to elevate a runner-up in the conference over a champion from another conference?

This past weekend surely moved the needle in the wrong direction, and not by a little. Keep in mind that LSU and A&M must play each other — one of those teams surely needed to win this past weekend so that it could then win on Thanksgiving and become a quality notch in the belt at season’s end. The SEC lost a lot of argumentative ground in terms of getting a second team in the playoff.