It’s true that the Boise State Broncos are tough to beat at home in Albertsons Stadium, the land of smurf turf. It’s true that this program has generally established a comfort zone on its blue field, making it hard for an opponent to travel to this corner of the country and escape with a victory. Yet, if the Broncos paid attention to what happened on Friday, they had to have known that in college football, nothing can be taken for granted. It’s a reminder young athletes can never hear often enough.

Playing at home did not protect the Marshall Thundering Herd on Friday against Western Kentucky. An awful day at the office for the defense, combined with several huge mistakes by quarterback Rakeem Cato, knocked Marshall out of the Gang of Five race for a New Year’s Six bowl bid. A season of quality gave way to a single afternoon of inconsistency, and as a result, Marshall was Herd-ed out of the NY6 bowl chase.

Strong teams — in the power conferences and the Gang of Five — run into off days. This is an unchanging annual truth of college football, one which has existed throughout the sport’s history. While some teams are rarely excellent on a snap-by-snap basis but are always excellent when they have to be (2014 Florida State, 2012 Notre Dame), the trap door which snared Marshall offered a very different kind of message: Some quality teams might be outstanding for most of a season, but if they bundle enough mistakes into one game, their larger hopes and aspirations can be shattered.

This message is what Boise State had to consider heading into Saturday’s game against the Utah State Aggies.

The clash in Idaho was going to decide the Mountain West’s Mountain Division and set up the league title game next week at home against West Division champion Fresno State. The winner was also going to move to the front of the line in the race for a New Year’s Six bowl spot, though in Utah State’s case, Northern Illinois and Memphis would have offered stiff competition.

The larger point was plain: Being at home offered Boise State no assurance of victory — not when Marshall had fallen the day before. It’s worth pointing out that Boise State lost a home game to TCU in 2011, one which deprived the Broncos of a BCS bowl berth. That was just one instance in which a Mountain West team had a major January prize slip through its fingers. Colorado State’s loss to Air Force on Friday eliminated the Rams from the New Year’s Six conversation and put a dent in the Mountain West’s armor as well. Too much chaos had unfolded in the previous 36 hours for Boise State to feel complacent. This team had to show that it was ready to handle the spotlight. 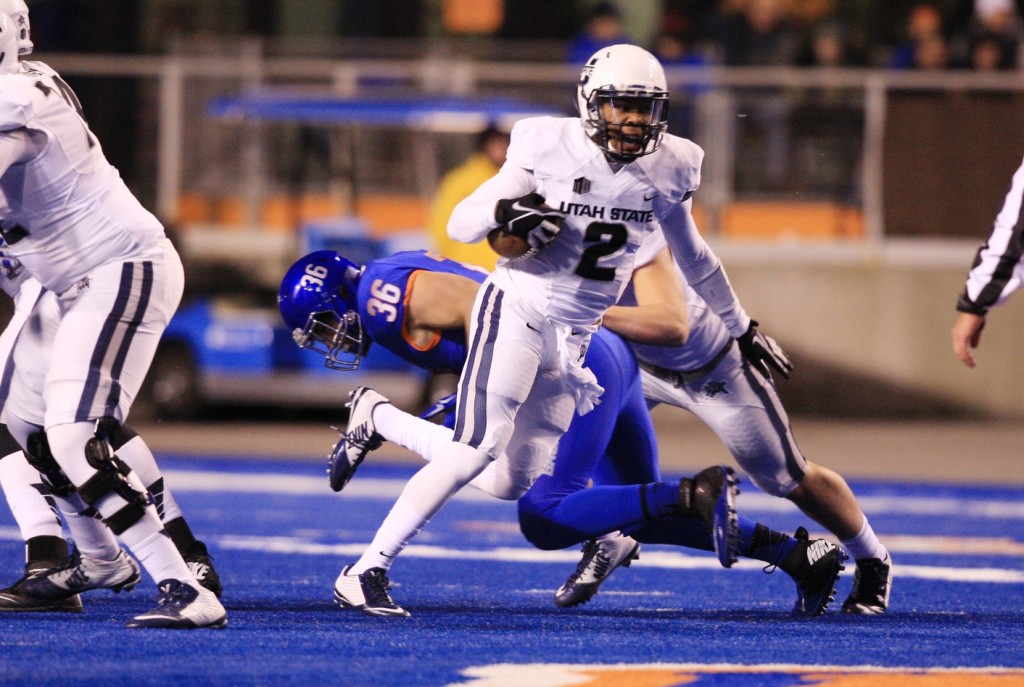 Utah State was playing with a fourth-string quarterback, Kent Myers, against Boise State. It was and is (and will remain) remarkable that the Aggies won nine games this season despite enduring injuries to three quarterbacks: starter Chuckie Keeton, backup Craig Harrison, and backup Darrel Garretson. Yet, even this gave Boise State no guarantee of victory.

Earlier on Saturday, the Louisville Cardinals scored 44 points on a day when their backup quarterback, Reggie Bonnafon, got injured. Starter Will Gardner was out of the picture, so Kyle Bolin had to fill in. While Bolin wasn’t perfect, he was very good… enough, at any rate, to lead his team to victory in a wild shootout. Utah State hoped to catch lightning in a bottle with Myers, and in light of the fact that Boise State fell behind 7-5 San Diego State 20-0 at home a few weeks earlier in November, the Broncos had to prove that they would thrive under the klieg-light glare of pressure.

They thrived so much that this game lost all its drama just four minutes into the second quarter.

Boise State scored touchdowns on each of its first five possessions. Blowing away Utah State’s defensive front, the Broncos paved the way for star running back Jay Ajayi to roll up 229 yards and five touchdowns. With 11 minutes left in the second quarter, Boise State had accumulated a 34-9 lead. Utah State never made a credible response, and as a result, this much-anticipated night — made bigger with Marshall’s and Colorado State’s Friday losses — turned into a very short one.

Boise State now hosts Fresno State for the Mountain West championship and the right to move to a NY6 bowl. If the Broncos defeat complacency as decisively as they did against Utah State, they’ll defeat Fresno State and move to a prestigious January bowl.