The announcement of the first College Football Playoff standings created a lot of stories — more than many of us in the college football community were ready to expect.

Let’s give you a brief overview of the top stories that emerged from the playoff announcement and then the completion of the 38-game bowl schedule (the national title game being a non-bowl event after the semifinals in the Rose and Sugar Bowls).

Getting high-quality pre-Christmas bowl matchups is hardly a guarantee, but there are several choice offerings before you unwrap presents — it’s as though you’re getting a few extra gifts this year.

The first day of the bowl season features a tremendous Las Vegas Bowl matchup between 10-2 Colorado State and a Utah team that bounced back in a big way this season under coach Kyle Whittingham. The Mountain West animus between these two schools — now in different conferences — should create a lot of spice in Las Vegas. It’s a five-star bowl for December 20.

On Dec. 22, Memphis and “hot coach” Justin Fuente take their American Athletic Conference title into the Miami Marlins’ new ballyard to face BYU, a team that might harbor fresh hopes about an invitation to the Big 12 (regardless of how realistic those hopes might be). This inaugural Miami Beach Bowl feels like an audition for a coach (Fuente) and a school (BYU). It carries more significance than you might be used to for a Dec. 22 bowl played in the middle of the day.

On Dec. 23, we have a Gang Of Five headliner in the new Boca Raton Bowl, as Northern Illinois — second in the G-5 pecking order behind Boise State — plays a Marshall team which led the race for much of the season. This game will show us how the best teams in the MAC and C-USA stack up against each other. It’s great when bowls provide that level of illumination.

Pre-Christmas bowls aren’t usually great. We get three special matchups this year. ‘Tis the season to be jolly… at least in this respect.

9 – SEVERAL LOWER-TIER BOWLS ARE NOT TREATS, BUT PRESSURE-PACKED OCCASIONS

For the six-win teams that sneak into a bowl, getting a postseason slot can feel like a reward. Consider South Alabama, and also consider 6-7 Fresno State. However, many other 6-6 teams face a lot of heat in their bowls — these are not pleasure excursions, but “you gotta win” cauldrons. If these teams don’t win their bowls, they’re going to face grumbling and restless fan bases at the start of the 2015 season:

* Miami and South Carolina in the Independence Bowl

* Texas and Arkansas in the Texas Bowl

* Illinois vs. Louisiana Tech in the Heart of Dallas Bowl

The exclusion of TCU and Baylor in favor of Ohio State was and is enlightened in this respect: TCU and Baylor scheduled FCS opponents this season, while Ohio State did not. If FBS teams consistently remove the FCS from their schedules and are rewarded for it, we will see at least some degree of improvement in scheduling, an unquestioned benefit for the sport. The next step is to create more TV-friendly non-conference games of considerable stature, but hey — baby steps. This is year one of the playoff system, and it might have done some good already.

Yes, certain kinds of matchups mean more and will draw more interest if they occur in top-tier bowl games, but it’s still impressive that the lower-tier December offerings pack such a brand-name punch: 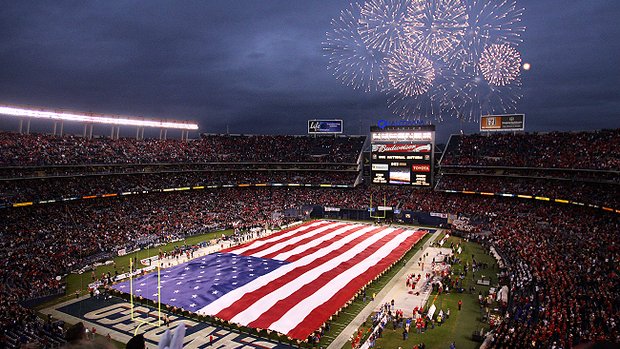 San Diego should be rocking for a sexy Saturday night matchup between Nebraska and USC in the Holiday Bowl. The game should get a great rating for ESPN in prime time.

Nebraska versus USC in the Holiday Bowl.

Texas versus Arkansas in the Texas Bowl.

Notre Dame versus LSU in the Music City Bowl.

Clemson versus Oklahoma in the Russell Athletic Bowl.

Penn State versus Boston College in the Pinstripe Bowl.

Kansas State versus UCLA in the Alamo Bowl.

Those games show why this is one of the deeper rosters of bowl matchups in recent years. It’s not just that there are 38 bowls — it’s that some of the top names in the sport fell into these late-December (or Jan. 2) slots.

The non-semifinal New Year’s Six bowls are terrific, a huge upgrade over the BCS, which was constrained by the conference lock-ins and the specific requirement that no conference could put more than two teams into the top five bowl games.

Notice that the SEC has three teams in the New Year’s Six rotation — Alabama, Ole Miss, and Mississippi State. Had Kansas State finished ahead of Arizona in the rankings, the Big 12 could have placed three teams in the NY6 rotation, but the Purple Wildcats were denied by the Pac-12 Wildcats.

At any rate, the matchups in the first NY6 rotation provide put-up-or-shut-up moments for individual teams and specific conferences.

The SEC West has three teams in this collection of games. Alabama in the semis is one, but before the Tide take the field against Ohio State, the Mississippi schools confront teams from the Big 12 and the ACC.

Ole Miss-TCU in the Peach Bowl is an enormous make-or-break game for the two programs’s reputations, especially TCU’s. If the Horned Frogs respond to a snub the right way, they will move to the forefront of the 2015 playoff discussion in the offseason. If they falter against the brand-name SEC, they’re going to be heavily questioned.

In the Orange Bowl, Georgia Tech carries the banner for the ACC against the SEC. In much the same way that Clemson’s win over LSU in the 2012 Chick-Fil-A (now Peach) Bowl bolstered the ACC in its constant turf battle with the SEC, a Yellow Jacket triumph here could achieve the same goal.

Then, in the Cotton Bowl, the Big 12’s other snubbed team faces Michigan State, a 10-2 club without a signature win. Baylor and MSU are both trying to gain their first (and only) non-conference victory of appreciable stature. The loser will feel very empty, especially if it’s Sparty.

It’s not pure coincidence that these NY6 matchups are an improvement from the BCS’s five games. The Cotton Bowl, for instance, was not constrained by conference lock-ins. Conference affiliation was less a determinant of NY6 eligibility when compared to the rankings released by the CFB Playoff Selection Committee. Flexibility in arranging matchups should always be a priority in bowl season. There are still some flaws in the overall bowl infrastructure, but this year moved the ball forward. 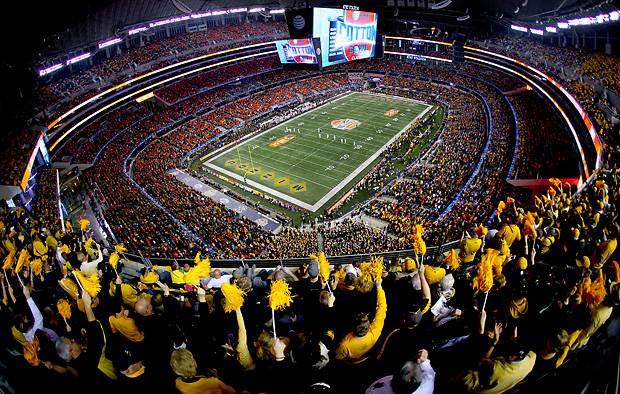 The Cotton Bowl’s new existence as a game not beholden to Big 12 and SEC tie-ins is a big (and representative) reason why the NY6 bowl rotation is so good, a noticeable upgrade over the BCS.

4 – PLAYOFF ANGLE NO. 2: SEEDING AND PLACEMENT

You might still be wondering why Florida State was not in the top two despite being the only team to go 13-0 from a power conference. (Yes, I would have voted FSU No. 1 if I had any power or influence, but I don’t.) As much as you might think FSU got jobbed with a No. 3 seed, stop to consider how things would have been different if FSU had been kept at No. 4 or moved up to No. 2.

If FSU had been voted fourth, it would have faced Alabama, but it would have stayed in its geographical home in the Sugar Bowl (in New Orleans). The opponent might be tougher, but the travel arrangements would be far better for the Seminole fan base.

If FSU had been slotted in the two spot behind Alabama, it still would have had to fly to LAX and play in the Rose Bowl, presumably against third-seeded Oregon. Seedings matter in this system, but they matter a lot more in the competition between 1 versus 2 as opposed to 3 versus 4.

The committee felt it could adjust the seedings to reflect the strength of performance of the four playoff teams, not just the quality of their respective resumes. Seeding and placement in the two playoff semifinals would be more contentious if teams from four different regions are involved. Given that Alabama and FSU hail from the same region, a conflict between length of bowl commute and desirability of matchup was certain to exist for the team that was seeded lower. FSU was the lower-seeded team, and it has a right to feel that it got the short end of the stick. However, this was only in the 1-versus-2 realm. Once FSU couldn’t get the No. 1 slot, it lost the ability to have its perfect scenario: playing at “home” in the Sugar Bowl against No. 4 Ohio State, with Alabama having to go to Pasadena to face Oregon.

3 – COACHING TENSIONS IN THE BOWLS

Georgia versus its former defensive coordinator, Todd Grantham of Louisville.

Oklahoma versus its former defensive coordinator, Brent Venables of Clemson.

The Big 12’s problem is that it doesn’t merely have one problem. The league has to make numerous adjustments, from non-conference scheduling to the conference title game issue to the split-championship issue which did not help the league’s cause. Oh, and the league might want to consider expanding IF the 12-team requirement for conference title games is upheld in April.

The Big 12 has a million different headaches in the wake of the playoff announcement. A cornerstone event will be this one in April.  It’s going to be a fascinating offseason for commissioner Bob Bowlsby, and the way the Big 12 reacts could create a ripple effect throughout the rest of the college sports community. We’ll see.

1 – THE NEW WORLD: SEMIFINALS MOVING INTO A SHORT-LAYOFF TITLE GAME

This season, the college football national championship game will be contested by teams coming off short (under two weeks) layoffs. This is and has been the hope of Oregon and other tempo-based teams: If we can just get to the title game without the long layoff, we can finally play with rhythm and be at our best. This could show precisely why the added semifinal before the title game will usher in a new era in which one conference (cough, cough) doesn’t dominate the way it did in the more exclusive BCS era. Yet, let’s say Alabama beats Oregon in the title game. The SEC would be able to say, “Welp, new system, new scheduling parameters, same results — your argument is invalid, Pac-12 and tempo-based advocates!”

The two semifinals are spectacular matchups, yes, and we’ll talk a lot about them in due time. For now, though, the bigger story is the advent of the short-layoff championship game. We’ll see if it’s a game-changer for the sport. Regardless of the answer, it will shed new light on the conference strength argument which always hovers over college football.