On one hand, the Stanford Cardinal thoroughly deserved to win Saturday afternoon’s Pac-12 North slugfest against the Washington Huskies.

The Trees towered over the Dawgs for most of a sunny and shadowy day at Husky Stadium, limiting Washington to only 179 yards, under 100 in both passing and rushing yards. Stanford has not been a pretty team to watch this season, but the Cardinals have certainly flexed their muscles on defense without the likes of Shayne Skov, Ben Gardner, and Trent Murphy, who helped make the program what it has become. Stanford carried the run of play against USC, and it did the same against Washington, nearly doubling the Huskies’ overall yardage output by collecting 364 yards. Stanford was the team that kept knocking on the door in this game, the team that imposed its presence and tilted the field.

In terms of territorial control, Stanford owned this game from start to finish. This is a game that should have belonged to the Cardinal. 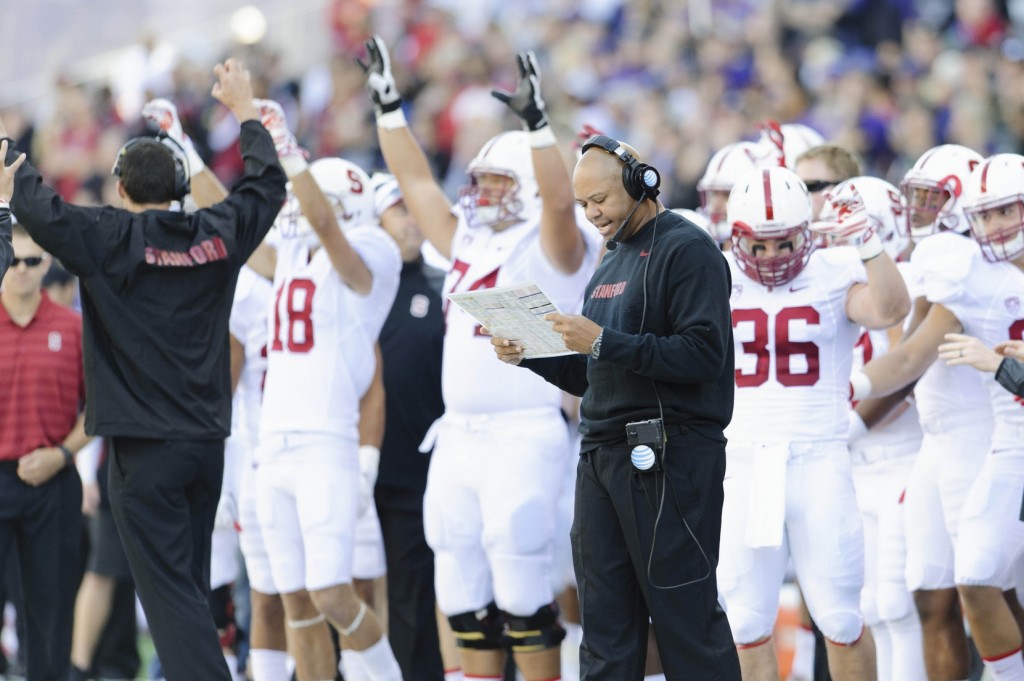 Stanford coach David Shaw has lost games with his decisions in the past. On Saturday, he won because an opposing coach made a poor decision in a tipping-point moment.

On the other hand, Stanford’s persistent problems led to an unnecessarily tense day at the office for head coach David Shaw. His team scored only 13 points on nine trips inside the USC 40-yard line on Sept. 6. Three weeks later, it once again did very little with six more trips inside an opponent’s 40. The Cardinal scored just one touchdown in four red-zone possessions. Kevin Hogan committed bad turnovers. The placekicking game continued to give points away. Stanford was a more physical and dangerous team throughout Saturday’s contest; the problem for the visitors from the Bay Area was that they were dangerous to their own selves, not just the Huskies.

Because of Stanford’s numerous mistakes, Washington — despite a nearly lifeless offense which scored only six points all day long — forged a 13-all tie in the middle of the fourth quarter. Facing fourth down near midfield, the Huskies should have welcomed the chance to pin Stanford’s balky offense inside its own 15-yard line or thereabouts. It was the simple decision to make on fourth and nine. Fourth and two? Okay — that might have been a reasonable situation in which to try for a first down. Not fourth and nine.

Not in a game such as this one.

Not with Washington’s front four hammering Stanford’s offensive line at the time.

Yet, Chris Petersen, whose trick plays helped win two Fiesta Bowls at little ol’ Boise State, watched a gamble turn into disaster. The fact that Petersen’s fake punt failed was not the problem; the problem was that Petersen made his decision when the flow of the game demanded a safer approach. The fact that the Pac-12 (especially Stanford) has a higher-caliber class of athlete compared to Boise State’s prior homes in the Western Athletic Conference and the Mountain West Conference should have also entered Petersen’s mind.

He didn’t listen to the wiser voices in his head. Stanford, given yet another short field, finally scored a tiebreaking touchdown, and Washington never sniffed the end zone in pursuit of a tying touchdown. What was a winnable game due to Kevin Hogan’s many lapses turned into a loss.

Few tweets summed up Petersen’s decision better than this one:

Sorry, Petersen. The Pac-12 has been playing the trickeration game long before you, buddy.

This is only Petersen’s first season. He deserves, and will receive, ample time to turn the Huskies into a next-level program.

Who knows if he’ll succeed? That’s not the focus in Seattle right now. What matters is that Petersen seemed to contain an inordinate amount of confidence that a trick play would work in a situation which required a contrary line of thought. Petersen’s supreme level of confidence was easier to maintain when he knew he had the best players on the field in a conference game. That’s not yet the case with his Huskies, and that’s one of the fundamental adjustments Washington’s new boss has to make.

Today was a learning experience for Petersen. If he absorbs the lesson, Washington should prosper in due time. If Petersen maintains tunnel vision, his heavily scrutinized tenure in the Pac-12 could be shorter than he currently expects.