Thanks to a number of offseason incidents, many wondered what to expect from the Georgia defense this fall under the leadership of new defensive coordinator Jeremy Pruitt.

After Saturday night’s contest against Clemson, there’s no doubt that the Dawg defense will be one of the best units in the country.

That’s not to suggest the UGA ‘D’ was perfect, as it made some mistakes early. The Clemson offense moved the ball at will for the most of the first half, with only some costly drops slowing the Tigers down. At one point, Clemson was so dominant that it scored back-to-back touchdowns with only an interception and a missed field goal keeping it from scoring more points.

Despite these struggles, the Dawgs went into the locker room tied at 21.

That’s when we saw what I call the “Pruitt Effect.”

Make no mistake about it: Pruitt is one of the finest defensive minds in the game. An integral part of Alabama’s national championship teams in 2011 and 2012, Pruitt took the reins at Florida State last year and led the ‘Noles to a crystal football behind a nasty defense that ranked third nationally in yards per game, allowing just 284 per contest.

The entire country got a taste of exactly how good Pruitt is in the second half. Using a variety of different looks, the UGA defense absolutely dominated the final 30 minutes. On Clemson’s seven second-half possessions, the Dawgs forced six three and outs. After allowing a first down on a 14-yard run by Clemson’s C.J. Davidson to end the third quarter, the Georgia defense buckled down again, sacking Tiger quarterback Cole Stoudt on first down and getting the Clemson offense off the field in three more plays.

In all, Clemson ran 22 plays in the second half. The Tigeres were only able to muster 15 yards during that time (minus-24 yards of total offense in the fourth quarter), and failed to convert a single third-down attempt. 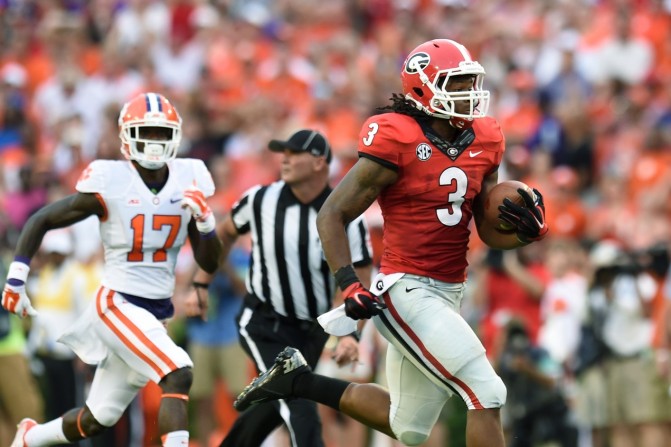 A gassed Clemson defense was no match for Todd Gurley, who ran for 198 yards and 3 TDs on Saturday. That Clemson defense was spent in the fourth quarter, though, because Georgia’s defense — guided by new coordinator Jeremy Pruitt — shut down the Tigers’ offense and changed the flow of the game.

With the Bulldog defense taking over the game in the final 30 minutes, the final outcome was completely predictable. Since the Tigers couldn’t sustain a drive after halftime (their longest possession was 2:20), the Georgia running game was able to wear down the Clemson defense, which seemed as though it was on the field for the entire second half. As a result, the Dawgs scored on three straight possessions against a tired Tiger unit in the fourth quarter, highlighted by a 47-yard run by Nick Chubb and a 51-yard scamper by Todd Gurley.

In other words: the Georgia offense got a lot of help from its outstanding defense.

The “Pruitt Effect” was in full force on Saturday evening. It’ll be interesting to see how the Dawgs will fare against a South Carolina squad that must have a “W” to stay in the SEC East race.