The Student Section Top 26 concludes with the top four teams in the nation. For those of you who thought a top 26 was a bit of a cop out, look at the AP Poll: 26 teams. We happen to be geniuses. To read even more of our genius work, Steve Fetch and I have covered 26-22, 21-17, 16-13, 12-9, and 8-5. Go to our writer archive pages, which you can regularly access during the season by clicking on our names as they appear in red on our Student Section bylines. My author page is here, while Steve’s page is here.

You can also read our two most recent roundtables — the first one here and the second one here — in advance of the season. 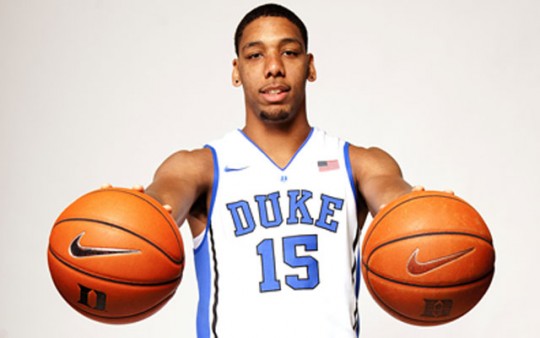 Key number: 1. This is the Ken Pom preseason No. 1 team in the nation.

Duke brings in the top recruiting class this season and once again, the Blue Devils are going to rely on a freshman to be their superstar. This year’s freshman phenom is Jahlil Okafor, a preseason AP All-American. He put up 15 points on 6 of 7 shooting in the exhibition opener, which is not shabby. He’s a low-post threat Duke hasn’t had in a while.

Okafor isn’t the only high profile newcomer. Justise Winslow is a 6-6 wing player with a lot of skill. He has a nice outside shot; he can rebound, pass and defend. Defense is something Duke has clearly lacked last season. Winslow has a kind of Michael Kidd-Gilchrist vibe.

Duke also has Tyus Jones, whose label is a true point guard. Exhibition stats aren’t everything, but it is telling that Jones had three field goal attempts and 11 assists. He averaged nearly 26 points a game in high school, so he can score, but if he took a scoring step back to get other guys going, this Duke offense could be incredible.

Grayson Allen is the third highly touted recruit. He might play the role of three-point bomber off the bench, alongside highly-touted second-year shooter Matt Jones.

Duke returns key pieces Quinn Cook, Amile Jefferson and Rasheed Sulaimon. Every member of the trio had experience in the starting lineup last season. Jefferson moves to his more natural power forward position after playing center. He’s one of the best offensive rebounders in the nation, cleaning 14.8% of available offensive rebounds while on the floor. His role in the offense is going to be getting putback buckets and providing his solid defense. Cook is known for his shooting ability and not turning the ball over. He hit 37 % from distance and 83 % at the foul line a year ago. He gives Duke a two-point guard look when he and Jones are on the floor. Sulaimon was up and down last year, but he’s well rounded and a good shooter. Marshall Plumlee is also back for your jokes.

The biggest question is, “How far will the defense progress?” Duke ranked 116th in Ken Pom last season. It was one of the biggest reasons for their one and done in the NCAAs. Jefferson and Okafor give the Blue Devils an impressive front line, which should lead to more blocks and harder shots in the lane. There was no shot blocking presence, which made Duke’s two-point defense horrendous. After a year of ups and downs, Duke could be more stable with its new class. This class has the pressure of doing what the Rivers and Parker teams could not do, win in March. 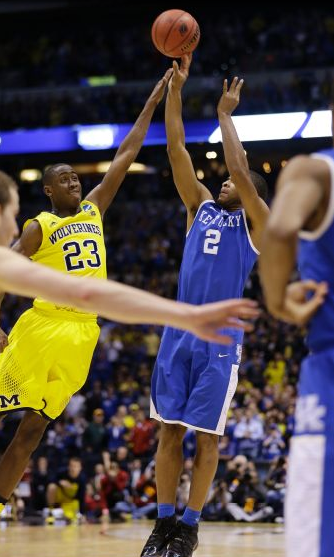 Key number: 5. Kentucky returns 5 key rotation players from a year ago. The Wildcats don’t do that a lot.

Willie Cauley-Stein. Alex Poythress. Dakari Johnson. Aaron and Andrew Harrison. Those are all the Wildcats that are back for the 2014-’15 season. Kentucky hasn’t brought back that much talent ever under Calipari. Andrew Harrison is the first point guard that has returned. His brother Aaron hit the biggest shots of the tournament last season. Kentucky played without the injured Cauley-Stein, but WCS’s presence on the defensive end is great. He’s one of the best shot blockers in the nation. Poythress is 6-8 and a matchup nightmare. He can rebound very well. He can bang inside but has also added range to his game. Johnson put up 5 and 4 (points and rebounds) in around 15 minutes a game last season. He’s probably going to see that many minutes this season as well.

The main returning group could be a starting lineup and easily be a top 15 team. However, not all of those guys will start. That’s because Kentucky has its normal insane recruiting class. Karl-Anthony Towns is the biggest name and should be the biggest contributor. He’s got a 7-4 wingspan, which helps around the basket offensively and defensively. Towns could pick up the offense left in Julius Randle’s wake.

Trey Lyles is a big man who can play the 4 but also can shoot the three-ball. He’s pretty much the stretch 4 that is in vogue. His all-around game is impressive. Devin Booker is a guard who should give UK a three point shooter off the bench. Tyler Ulis is 5-8, which will make him seem like Muggsy Bogues with all of the very large Kentucky players. Ulis is lauded for his passing and his defense.

Kentucky returns Marcus Lee and Dominique Hawkins. Lee showed himself to be a potential big-time player once Cauley-Stein went down. Lee dunked a lot in the NCAA Midwest Regional in Indianapolis. Hawkins was a defensive guard in the Kentucky rotation last season.

The Wildcats legitimately go 10 deep. John Calipari has talked about going with line changes for his team because there is so much talent. It was just Pikeville, but Kentucky played 10 players for 16 minutes or more. The Cats are deep, they are loaded, they are tournament tested. Kentucky is a major threat to end up back in the title game. 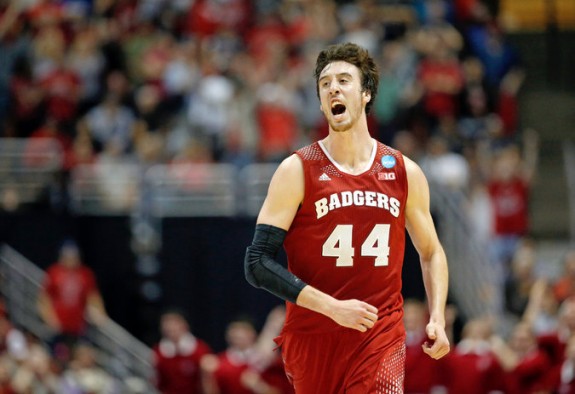 TweetCap: The Badgers rode the surprising force of Frank Kaminsky and a great offense to the Final Four.

Key number: 4. Bo Ryan has 4 starters back from the Final Four squad, including Kaminsky.

The Badgers lose Ben Brust, and that’s it as far as last year’s contributors go. Kaminsky, Traevon Jackson, Sam Dekker, Josh Gasser, Nigel Hayes — they’re all back. Not only are they all back, Dekker grew two inches just to make the Badgers more formidable.

It all starts with Frank Kaminsky, the All-American. Kaminsky averaged 14/ 6/ 1.7 blocks while shooting 53 % overall, 37 % from three and 76.5 % at the line. His range as a center gave teams fits. He completely changes the Wisconsin offense. Kaminsky wasn’t the best at rebounding. He only had two double doubles, one of which came against Arizona in the Elite 8. Both were after Valentine’s Day.

Kaminsky is a superstar big man on which the Badgers are built. He’s got complements like Sam Dekker, who put up 12 and 6 last season, but is expected to make the leap. He can shoot the three-ball, score inside, get to the line, the total package. These two form one of the best duos in the country.

The most important player for the Badgers may be Traevon Jackson. He came a long way a season ago, averaging 10.7 points, 3.7 boards, and 4 assists per game. His shooting improved to 38 % from three, and his turnovers decreased by six percent. Jackson is the late-game shot man for the Badgers. If you remember, he took the final shot against Kentucky. If he ups his game another level, you have a lineup with three players who could be on AA teams.

Josh Gasser went down with a knee injury that opened the door for Jackson’s rise. Gasser played well in his return last season with nearly 9 points, 4 boards, and 2 assists per game. Gasser is the best three-point shooter on the team, netting 43 % a season ago. He also hit almost 87 % at the stripe.

Nigel Hayes and Bronson Koenig are key players back. Koenig is expected to take over Brust’s role in the offense. Koenig lit up Kentucky in the Final Four with Jackson in foul trouble as last season’s token great first-half performance, aka, “The Spike Albrecht.” Hayes was the sixth man for the Badgers, pouring in 7.6 points on 51 % shooting. He also led the team in steals. An expanded role should lift his rebounding.

Wisconsin’s bench doesn’t look terribly deep, but when you have six players like this, you are in business. The bench can develop as the season comes along. Bo Ryan is their coach, you know they will be sharp. This is my pick for the national champion. 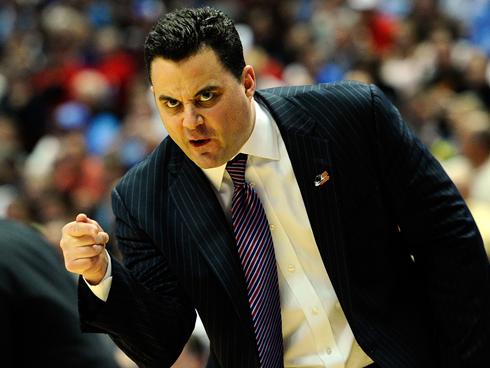 TweetCap: The Wildcats steamrolled through the nation but fell short of the Final Four again.

Key number: 1. This was the best defensive team in the nation.

Aaron Gordon and Nick Johnson are on NBA rosters and the Wildcats are still our top team. Sean Miller brings back a trio of starters, led by point guard T.J. McConnell, forward Brandon Ashley, and center Kaleb Tarczewski. Also back are the explosive sixth man Rondae Hollis-Jefferson and teammate Gabe York. They are joined by one of the top recruiting classes in the nation. Sean Miller has a lot of weapons.

McConnell averaged over 5 assists a game while being a solid three-point threat and a thief (1.6 steals) last year. He got the offense humming with his passing ability. One of his favorite targets was the big man Tarczewski. Some defenses thought he was Zeus the way he scored easily around the basket. Tarczewski hit 58.4 % from the field. At the line he was a danger hitting 75.6 %. Brandon Ashley left a  hole in the Arizona lineup when he went down due to injury. His defense was good but he was rounding into a full offensive threat. His interior offense was there all season when he was healthy: 55 % on twos, and his three-point shot was coming along (37 %). His passing was starting to shine. Ashley had his two best assist games of the season a couple of games before he got hurt.

Hollis-Jefferson played both forward spots but should be the 3. His outside shot (2 of 10 on threes) wasn’t a threat. The rest of his game: 9 points, 6 boards, 1.5 assists and 1 block. He nearly went pro. Coming back to school should help his draft stock if he develops. York started when Ashley got injured and filled in well with 6.7 points and 2 boards. York is a three-point threat who hit 38.5 %.

The major impact freshman this year is Stanley Johnson. He was regarded as the best shooting guard prospect by everyone. His game is well-rounded, as his shooting, passing, rebounding and defense — they are all talked about fondly. Johnson was the guy who did this:

Kadeem Allen was the National JUCO player of the year according to everyone. He had 13 games of over 30 points, as well as two triple doubles. He set free throw records for makes and attempts. Allen was a monster who should be able to come in and play both backcourt roles. Parker Jackson-Cartwright is a pure point guard recruit. Dusan Ristic and Craig Victor could provide major value on the front line.

The major question surrounding Arizona is: “Will this be the year the Wildcats break through?” They have the coach. They have the players. They’ll have the West Coast advantage. Will they get the draw? Only time will tell.