In the aftermath of Sunday’s College Football Playoff snub, the main thing TCU and Baylor fans are telling the college football world is that if their schools were named Texas or Oklahoma, they’d be making playoff preparations. It’s the kind of claim which is hard to scientifically verify or refute, but it’s a claim which carries some real-world weight. (How much is the real question.)

Yet, while Big 12 fans might have a legitimate gripe, they can’t be too upset about being passed over by Ohio State. Who knew the Buckeyes were going to beat a good team with a Heisman finalist, 59-0, on a neutral field with a third-string quarterback? Ohio State certainly made the best closing argument of any team in the hunt for the No. 4 spot. That happens. That’s sports, in all their unpredictability.

What TCU and Baylor are truly upset about is the brand-name issue (relative to Texas and OU), something which is magnified by a sense that the committee was inclined to want to put Urban Meyer and Ohio State in a semifinal with Nick Saban and Alabama. Big 12 fans are convinced that an Ohio State selection was appealing to the committee not just as an evaluation of football merits, but as an act that could pave the way for TV ratings gold… something TCU and Baylor couldn’t offer to an equal degree. It’s not a huge injustice, but it is certainly a decision you could question and argue about.

That’s college football’s longstanding problem, right there: The sport, throughout its history and especially since the Associated Press Poll was created in the 1936 season, has loved to argue as a matter of both procedure and culture. College football would rather create highly-rated TV shows revealing its weekly rankings than produce a process with defined criteria that can simplify the process… but would take a lot of the (TV) drama out of that same process.

Rules, criteria, clear hierarchies of priorities — these are enemies of TV drama and the emotionalist arguments that are part of the “First Take / Embrace Debate” programming culture which is such a core part of both sports and political talk shows on cable these days.

What is the best team? A “best team” is vague enough that you can use virtually any rationale to justify your choice: resume, best win, best loss, wins against ranked teams at the time of the game, wins against teams that were ranked at the end of the season, eye test, favored in Vegas on a neutral field… one could go on and on.

Without rules, anyone has an argument, and in college football, the key has always been, “What does the leverage-holding group of people think?” If that leverage-holding group defines a “best team” in one way instead of another, the outcome is decided in the absence of a perfect scenario (which, for purposes of the playoff, would be four and only four teams having unbeaten records while everyone else has a loss). If your team is not seen in the right way by the people that matter, you’re out of luck. This is how (and why) rankings controversies will continue to happen in the absence of clear and ordered criteria.

This is how one year’s moderate controversy (and this year’s first playoff ranks as exactly that…) becomes a genuine injustice in another.

Want to identify some true college football injustices, not just some minor imperfections on the margins of a debate? Let’s point to some of the bigger examples through the years:

1983 AUBURN NOT GETTING A SHARE OF THE NATIONAL TITLE 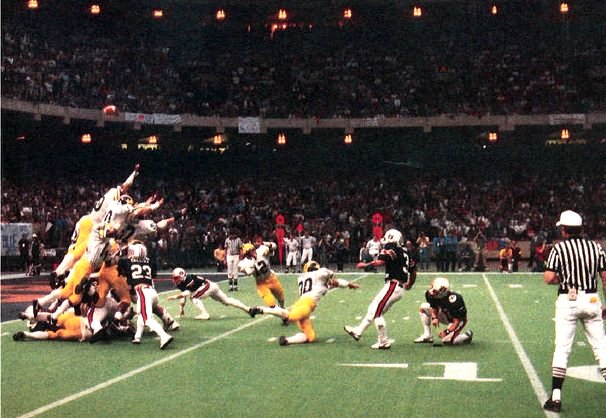 Al Del Greco kicked three field goals for Auburn to win the 1984 Sugar Bowl against Michigan. In the jumbled picture created by Jan. 2, 1984, Auburn deserved a share of the national title with Miami after all it achieved. This was one of the more notable injustices of the pre-BCS era.

With New Year’s Day falling on a Sunday, all of college football’s biggest bowl games were held on Monday, Jan. 2. Georgia upset Texas in the Cotton Bowl, knocking the Longhorns out of the national title hunt. Miami knocked off No. 1 Nebraska to rightly earn a portion of the national title. However, the same Auburn team that won the 1983 SEC title — a title achieved in part by beating (on the road) the Georgia team which took down Texas — should have also been given a piece of the pie. Yet, Auburn finished behind the Hurricanes and the No. 2 Huskers.

Keep this point firmly in mind: In the pre-BCS era, split national titles might have represented unsatisfying or incomplete resolutions to seasons, but they were not fully or severely unfair. If teams split titles, they could call themselves champions. It’s when they were left out of the AP and UPI/coaches’ polls entirely that an injustice truly occurred.

This sets up the next primary example of a true college football injustice: 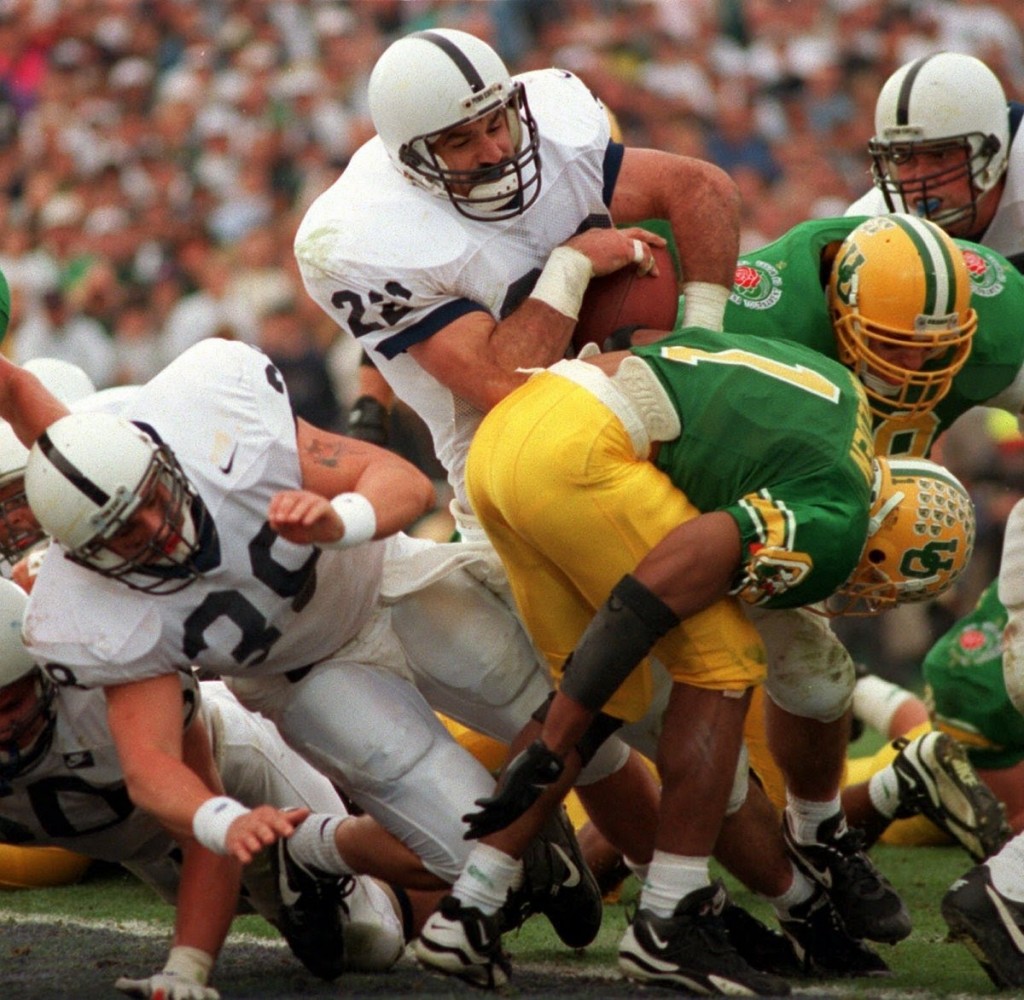 The great black mark on the 1994 season was found in the fact that Penn State easily handled Indiana, only to allow a pair of late garbage touchdowns against the Hoosiers in a 35-29 win which felt like a 13- or 20-point triumph. Pollsters, though, saw the final score and downgraded the Nittany Lions. They weren’t even given a share of the national title with Nebraska despite an unbeaten season. Several times in the past, a Joe Paterno PSU team went unbeaten but didn’t even share the title. The 1994 team, seen crushing Oregon in the 1995 Rose Bowl above, was easily the unbeaten Paterno squad with the greatest claim to a national title.

If Colorado and Georgia Tech could share the 1990 title; if Miami and Washington could do the same in 1991; and if Michigan and Nebraska could share the 1997 crown, surely Penn State could have been given co-champion status alongside Nebraska at the end of the 1994 season.

That’s the pre-BCS era. It was in the BCS era itself when college football seasons — no longer allowed to end with split titles — counterintuitively created more injustices.

2000 AND THE MIAMI-FLORIDA STATE HEAD-TO-HEAD

In the 2000 season, Miami defeated Florida State. Yet, when the time came to decide on two teams in the BCS title game, the Seminoles — not the Hurricanes — were Oklahoma’s opponent. This bore a resemblance to the 1993 debate, in which Florida State got the nod over Notre Dame despite losing to the Irish in head-to-head competition. 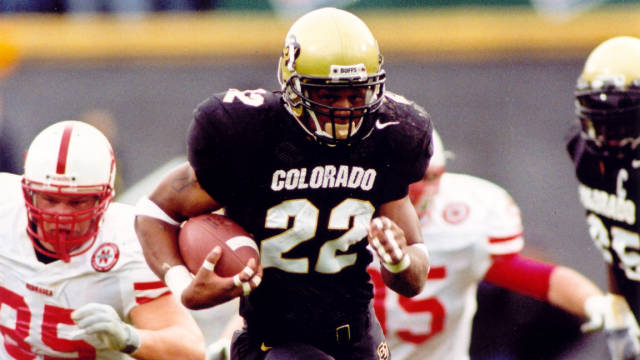 Conference championship games entered college football in 1992, with the first SEC title game in Birmingham before the permanent move to Atlanta in 1994. The Big 12 started a title game in 1996 before discontinuing it in 2010. These events came about because conferences became large enough to house two divisions. Naturally, the winners of each division would contest the conference title. Little did anyone know that a team could fail to win its division and still compete for the national championship.

Nebraska made that piece of history, despite getting hammered, 62-36, by Colorado. The Huskers watched Colorado play for and win the Big 12 title against Texas a week later, but it was Nebraska which was allowed to play Miami in the 2002 Rose Bowl for the crystal trophy.

Colorado fans — and Oregon fans — could not believe it. They probably still can’t. 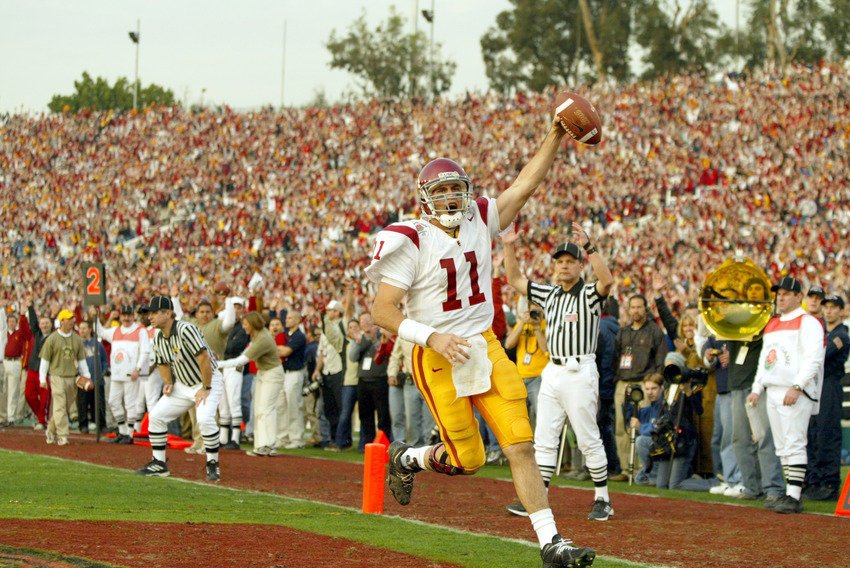 It is one of the great regrets in college football history, certainly the greatest in the BCS era: Year after year after year, USC did not get to play the SEC champion in a bowl or a plus-one game. (Side note: The use of a plus-one after the bowls would have solved almost every major college football problem over the past 40 years.) In 2003, the lack of a USC-LSU plus-one — with the Tigers lifting the BCS trophy — deprived millions of college football fans the one game they really wanted to see: Pete Carroll versus Nick Saban for all the marbles.

In 2004, USC and Oklahoma deserved to play for the title based on what they had done in the regular season. However, Auburn should have been able to play another unbeaten team, Utah, in the Sugar Bowl. Alas, the Tigers were not given that chance. This pronounced flaw in the BCS bowl system left three unbeaten teams at the end of the bowl season, a reality which left a bitter taste in the mouths of fans. At the very least, Auburn and Utah could have whittled that list down to two teams. (We still would have needed a plus-one between USC and Auburn.)

2008 AND THE TEXAS-OKLAHOMA DUST-UP 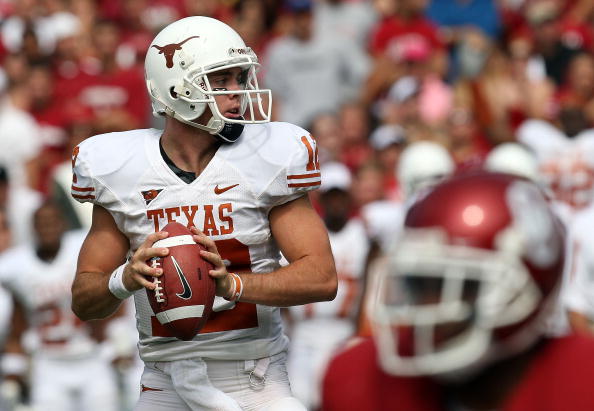 Texas didn’t just beat Oklahoma in 2008. The Longhorns won convincingly, by 10, on a neutral field. The Longhorns’ non-conference schedule was much softer than the Sooners’ slate, but they played a tougher Big 12 schedule through 12 games and owned that head-to-head win. Yet, the Longhorns were kept on the outside looking in. If you thought 2014 was embarrassing for the Big 12, include 2008 in the conversation.

See the caption below for a fuller explanation of this example: 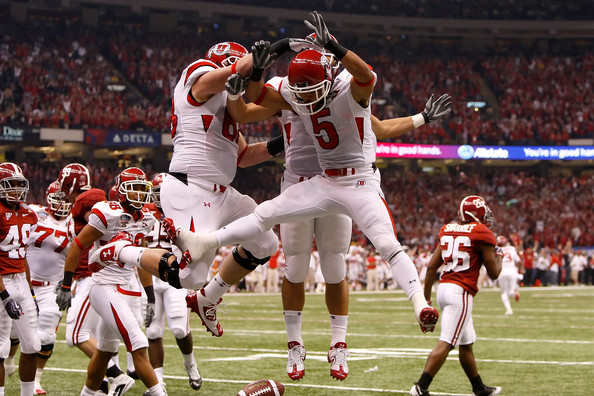 If a rematch occurs in the national championship game of college football, such a matchup has to exist free from the idea that another team had a valid claim to bust up said rematch. In 2011, Oklahoma State was that team in the middle of an Alabama-LSU sandwich. The Cowboys lost at Iowa State, but they beat a succession of ranked teams and compiled a 12-game resume which could stand on its own merit in comparison with Alabama’s portfolio. Keep in mind: Oklahoma State did not play a conference championship game in the Big 12 in 2011. The league’s last title game was in 2010. 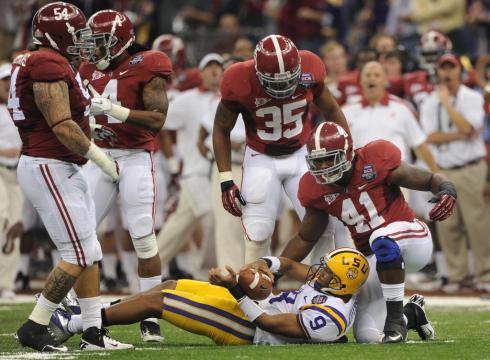 TCU and Baylor were not wronged to the extent seen in these examples above. Yet, the sadness felt by the Frogs and Bears is real, and it’s the product of an enduring and hard-to-stomach reality in college football: The sport doesn’t care for rules, which means anything goes… even if fairness becomes a casualty in the larger scheme of things. From 1983 Auburn through today, injustices have been a frequent part of college football seasons.

Expect more of the same, unless or until:

A) magic scenarios (four and ONLY four unbeaten teams make it through the regular season…) emerge on a consistent basis;

B) reforms occur for the 2015 playoff process and, in addition, the current way in which the conference championship game issue is handled.