You know what the main stories will be when the College Football Playoff arrives on Jan. 1:

Can Mark Helfrich not get destroyed in the coaching matchup with Jimbo Fisher?

Can Oregon’s offense deal with an extended layoff, finding rhythm in a situation that is often hostile to tempo-based offenses?

What about the storylines and tension points that are going to fly under the radar?

The BCS National Championship Game was a one-stage, all-or-nothing event in which the winner promptly lifted a crystal football and the loser was devastated. This bowl season, college football arrives at its first-ever national semifinals, in which the winner doesn’t arrive at the end of its season — another game will be left to play on Jan. 12 in Arlington, Tex. The BCS title game frequently produced runaway nerves from at least one of the two teams if not both. Will the presence of semifinals — and the attendant awareness that another game lurks in the not-too-distant future — create more emotionally controlled contests? It will be something to monitor on Jan. 1.

Ohio State and Urban Meyer shut down Wisconsin’s Melvin Gordon with only one week to prepare. Urban has three and a half weeks to prepare for Amari Cooper. You can bet that the Buckeyes will double Cooper and make sure he doesn’t beat Ohio State’s secondary on deep balls. At some point, a non-Cooper player will need to make a big catch for the Crimson Tide. Will it be T.J. Yeldon coming out of the backfield? Will it be tight end O.J. Howard on short-intermediate routes when Cooper clears out space in the middle layer of the Ohio State defense?

The electric playmaking of Cooper and the smashmouth, short-yardage running of Derrick Henry are the two most attractive features of Alabama’s offense. In between lies the non-Cooper passing game. The success of this part of the Crimson Tide’s attack could very well decide how comfortable Blake Sims eventually becomes in this game. Accordingly, it could decide who wins the 2015 Sugar Bowl.

The 2015 Rose Bowl will draw the attention of a national audience to the battle of two current Heisman Trophy winners, Marcus Mariota and Jameis Winston. While there are misperceptions about each team’s identity…

… it remains that at Oregon, the defensive side of the ball will always live in the shadow of the offense. This doesn’t mean it’s right or appropriate — it’s just the way it is.

This season, Oregon’s defense endured some growing pains under new coordinator Don Pellum, who took over from retired coordinator Nick Aliotti. Oregon’s defense doesn’t need to be excellent to win games, but it does need to be legitimately good. In the first half of the season, the likes of Washington State and Arizona enjoyed a fair amount of success against this defense. Oregon failed to get off the field on third down, leading to the creation of the phrase “third down and Pellum” in Pac-12 circles. In late October, California scored 41 points against Pellum’s defense, but that Mariota fellow — carrying his team as he regularly did throughout the season — was able to post a big 59.

Ever since that disappointing performance, Pellum — upset that the offense had to continue to carry the team across the finish line — clearly got the attention of his players. Oregon has served up only one remotely disappointing defensive performance since then (allowing 27 points, some of them in garbage situations, to Utah on Nov. 8). The Ducks smothered Arizona’s offense in the Pac-12 Championship Game, limiting a Rich Rodriguez-coached offense to only 13 points for the game and only 20 yards in a first-half shutout. When you consider the fact that Oregon took a 30-3 halftime lead against both Colorado (Nov. 22) and Oregon State (Nov. 29), the Ducks really haven’t allowed a meaningful touchdown since that very same Utah game on Nov. 8.

How Pellum’s defense performs against Jameis Winston will have a lot to say about the Rose Bowl’s ultimate outcome. UO’s defense simply won’t be the central focus of the media’s attention in Pasadena.

The part of the Ohio State pitch-and-catch combination that everyone will talk about leading up to the 2015 Sugar Bowl is Cardale Jones, the quarterback pressed into service in the Big Ten Championship Game. Jones will certainly encounter his fair share of “How are you going to prepare for a Nick Saban SEC defense?” questions in the days leading up to kickoff. 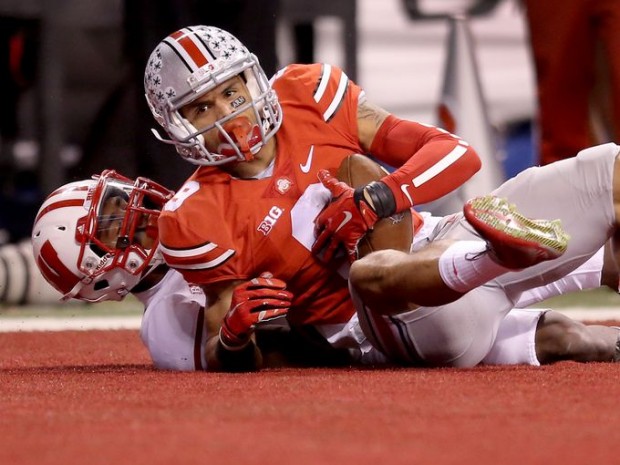 If Devin Smith can make catches in traffic on deep balls, Ohio State will produce the kinds of leverage-shifting plays one needs to make against a formidable opponent such as Alabama.

However, for all the scrutiny Jones will receive, it’s his receivers who might need to pull an Amari Cooper and stand out from the crowd. Devin Smith pulled in three touchdown receptions of at least 39 yards in the Big Ten Championship Game against Wisconsin. Given that Alabama’s cornerbacks have been outfought on several occasions for jump balls in the Crimson Tide’s last two games against Auburn and Missouri, Ohio State’s receivers have an opportunity to swing this game in the Buckeyes’ favor while also limiting the burden on Jones’ shoulders. If OSU receivers win a number of jump balls, Jones will not have to be perfect or precise — he will only have to give his teammates a reasonable chance of making a play on a long pass. This could serve as a portal to victory for the Big Ten champions.

The fact that the Oregon Ducks are almost a 10-point favorite in the Rose Bowl is — remember — an extension of Las Vegas’s reading of the public’s expectations. Remember that a betting line is not a prediction of how a game will unfold, but a measurement of where betting action will flow in equally on both sides, so that money is made regardless of which team wins.

There’s a definite national perception, then, that Oregon is the team in far better position to win than Florida State. More than a few people on Twitter have voiced the belief that 2014 Florida State is going to encounter a fate similar to 2012 Notre Dame: avoid several landmines by close margins in the regular season and then get whipped in the postseason.

Such a belief, however, ignores a basic truth about bowl games: They give injured teams a chance to heal. Florida State head coach Jimbo Fisher is very confident that he’ll have defensive tackle Eddie Goldman, cornerback Ronald Darby, and running back Karlos Williams ready to go for the Rose Bowl.  Florida State’s ability to rest and heal could very possibly make the Seminoles a lot more powerful and formidable on both sides of the ball. You could see new dimensions of this team that did not have a chance to emerge in the midst of an injury-ravaged regular season.

You might recall that 2012 Notre Dame — a team compared to 2014 Florida State for obvious reasons — ran into Alabama in that season’s BCS National Championship Game in Miami. One thing about that 2012 Alabama team is worth noting: The Crimson Tide were severely banged up at the end of the regular season. It’s part of why Georgia came so close to beating the Tide in the SEC Championship Game.

Alabama got healthy for Notre Dame, though, and America saw how awesomely powerful the Tide could be when at their best.

Florida State might be compared to 2012 Notre Dame right now.

It could be compared to 2012 Alabama when all is said and done in the Granddaddy.