This will mostly be a set of TV listings for the coming Saturday, but every college football fan needs at least a few notes about how to juggle competing games or time slots. We’ll provide a brief comment when necessary, and we’ll follow the main television listings with a few concluding remarks as well.

GAMES ARE RANKED IN ORDER OF LIKELY QUALITY/WATCHABILITY

Added note: Games start at the beginning of the time window (noon Eastern time, in this case) unless noted

2) Colorado State at Boston College, 12:30 Eastern, ESPN3/GamePlan — Boston College has already done more than most college football experts expected before the season began. Colorado State was knocked back a peg by Boise State a few weeks ago. It will be interesting to see how the Rams handle this cross-country trip.

4) Northwestern at Penn State, Big Ten Network (in a split format with Iowa-Purdue) — If Northwestern-Penn State is the fourth-best game in a 3.5-hour window, you know that window doesn’t have a lot of zing to start off your Saturday. 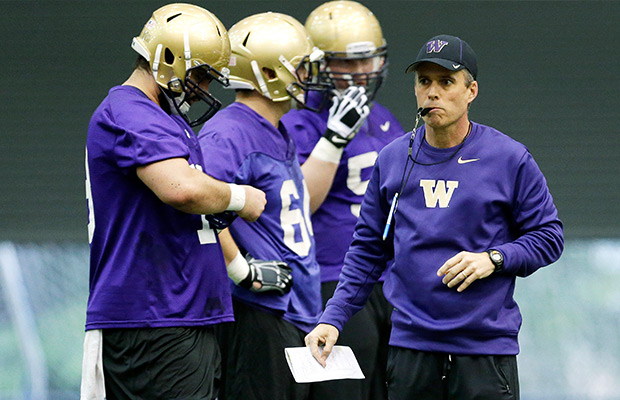 Chris Petersen’s first “really big game” at Washington against a Pac-12 North Division heavyweight? Don’t mind if I do.

1) Stanford at Washington, 4:15 Eastern, FOX — This is the best daytime game on Saturday, and it’s also in a staggered time slot, which means that if you’re watching a 3:30 regional game, you can come to the end of this Pac-12 tilt around 7 p.m. Eastern if Cardinal-Huskies remains close.

2) Arkansas vs. Texas A&M (In Arlington, Tex.), CBS — Is Arkansas ready for the big boys after fattening up on weaker teams? Is Kenny Hill going to continue to shine?

3) Colorado at California, 4 Eastern, Pac-12 Network — This is for the psychology majors out there: Cal is a better, more talented team than Colorado this year, but will the Golden Bears spend the afternoon with their minds back in Tucson, Arizona? This, after all, happened last Saturday near the Old Pueblo:

5) Minnesota at Michigan, ABC/ESPN2/WatchESPN — There’s a Brady Hoke train wreck reason to fixate on this game… if you are that sort of person. Yet, this is likely to be bad football. Who wants to watch bad football if you’re not getting paid to do so?

6) Texas at Kansas, 4 Eastern, Fox Sports 1 — Kansas isn’t good enough to beat Texas… but Texas is weak enough to lose to Kansas if it’s not sharp.

IN-BETWEEN WINDOWS: THE GAME THAT DOESN’T FIT INTO THE 3:30 OR NIGHT WINDOW

Cincinnati at Ohio State, 6 Eastern, BTN national broadcast — Cincinnati isn’t a pansy, and Ohio State is not a juggernaut. If Virginia Tech could beat OSU, Cincy could do the same. 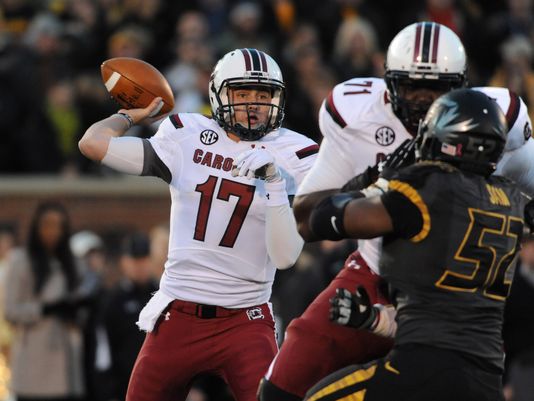 1) Missouri at South Carolina, ESPN — The game of the day, given its current centrality in shaping the rest of the SEC East race.

2) Duke at Miami (FL), 7:30 Eastern, ESPN2 — There might be a lot of empty seats in the ballpark, but the game means a lot in the cluttered ACC Coastal Division.

3) North Carolina at Clemson, ESPNU — It could be a Clemson blowout, but both teams are trying to figure out how good they are. There’s enough intrigue to make it a better watch than…

4) Boise State at Air Force, CBS Sports Network — Boise State’s been a poor road team this season. Air Force has not been the pushover it was a year ago. There’s a chance this game could become interesting.

5) Notre Dame vs. Syracuse (In East Rutherford, N.J.), 8 Eastern, ABC — Notre Dame probably blows the lid off this game, but Syracuse could treat it as its Super Bowl in the site of… last February’s Super Bowl.

6) Washington State at Utah, 8 Eastern, Pac-12 Network — Which Washington State team shows up? You’ll want to peek in during the first half, if not the second. Can Utah sustain what it has started this season?

1) Oregon State at USC, 10:30 Eastern, ESPN — How does USC regroup after getting dusted by Boston College? What do we know about Oregon State? Find out when you eat this pre-midnight snack in the Pac.

2) Nevada at San Jose State, 10:30 Eastern, CBS Sports Network — Available for your eyes if you have two televisions or if Oregon State-USC becomes a laugher. Americans need options, you know.

* In the noon window, Vanderbilt-Kentucky doesn’t promise good football, but the game could be close as you near the end of the window at 3:30 Eastern time.

* Big Ten Network offers another regional broadcast at 1:30 Eastern, an intriguing contest between Maryland and Indiana. BTN follows its Cincinnati-Ohio State national game with another national offering that’s listed as a 9 p.m. kick, but will probably start closer to 9:15: Illinois-Nebraska in Lincoln. If Cincy-Ohio State remains close to the end, you’ll miss much of the first quarter of Illini-Huskers.

* Minnesota-Michigan and Notre Dame-Syracuse are two examples of games that looked a lot better before the season began, but which don’t command a lot of buzz in the present moment.

* If you’re looking for games that didn’t seem like worthwhile views before the season began, but have turned into interesting options through four weeks of action, here you go:

1) Colorado State-Boston College (due to BC’s upset of the USC Trojans) at 12:30 Eastern on ESPN3/GamePlan

3) Memphis-Ole Miss (due to Memphis’s near-upset of UCLA a few weeks ago) at 7:30 Eastern on ESPN3/GamePlan