This Saturday of college football is going to be fascinating — not just in terms of the football, but the way the day unfolds on television.

We’ll get right into this week’s viewer’s guide, and at the end of the piece, we’ll explain what’s meant in that statement above. 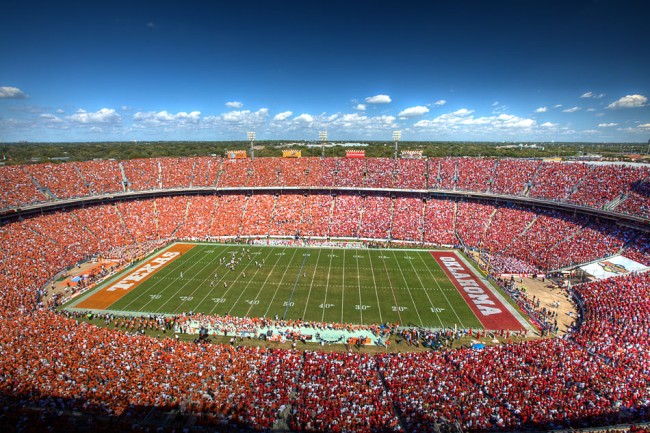 Burnt Orange for one half of Dallas’s revered Cotton Bowl, Crimson for the other. It’s one of the best scenes in sports, the kind of picture that defines college football for generations of fans.

— Why a tie? The Red River Rivalry seems like a blowout, but Oklahoma was a solid favorite last year and got blown out of the Texas State Fairgrounds by Bevo’s Boys. You can’t write off Texas just yet. In reality, the likely compromise you can make as a viewer, at least if you’re a relatively neutral party, is to pay attention to Texas-OU in the first half. Georgia-Mizzou should be the much more competitive game in the second half.

3) Duke at Georgia Tech, 12:30 Eastern, ESPN3 — This is a massive game for both teams. Duke has a soft closing schedule in November. Georgia Tech can secure a head-to-head tiebreaker against a third ACC Coastal opponent and take a huge step toward a division title.

4) Northwestern at Minnesota, Big Ten Network — How will the Wildcats handle this sudden surge of prosperity? Interesting question.

6) Indiana at Iowa, ESPNU — Both programs need to win. In Iowa’s case, it’s slightly more a matter of needing to avoid a loss. 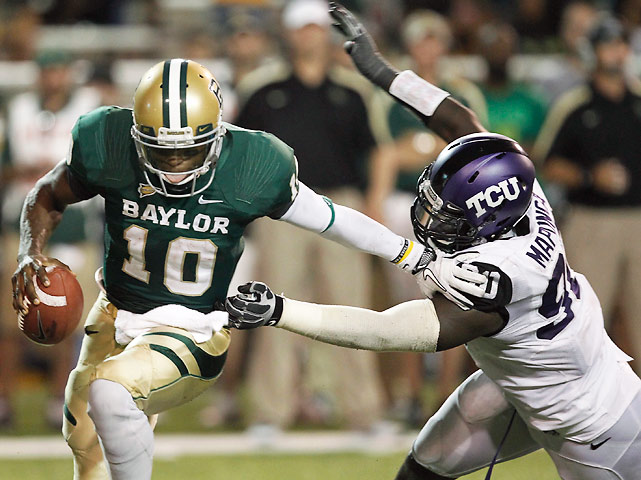 TCU and Baylor have played entertaining games in recent years. If they provide another crowd-pleaser on Saturday, a fun season will only get better.

Note: The editorial team at The Student Section is split on which game is the biggest/most important/most attractive in the 3:30 window.

We’ve set the scene for each of the two mammoth games in this window, to enable you to arrive at your own conclusions.

Our Auburn-Mississippi State piece is here.

More is said about Baylor’s situation in this piece, courtesy of associate editor Terry Johnson.

1) Auburn at Mississippi State, CBS — I’m of the view that as a pure TV product, Tigers-Bulldogs is slightly better than TCU-Baylor, though naturally, I’ll be watching both games on my two-TV setup from my man cave in Seattle, and I’ll wear out the remote by clicking on Oregon-UCLA during commercials in one or both games. (Recommendation: Do the same if you’re not a fan of any of these six teams.)

Why is Auburn-MSU a bit better as a TV draw? Very simply, the heavyweight — Auburn — is the road team. In TCU-Baylor, the heavyweight is the home team. TCU is entirely capable of winning, but if you had to identify the game which is more likely to create a close finish, the verdict here is Auburn-Hail State.

(Naturally, TCU will win on a Hail Mary, and Auburn will prevail by 25.)

3) Oregon at UCLA, FOX — Two quick notes here, the first one about Ducks-Bruins in particular: This is, if not a true College Football Playoff elimination game, something very close to it. It is very hard to imagine either one of these teams — both with awful offensive lines — running the table through the rest of the season. The games in the SEC and Big 12 are bigger in this window, but Ducks-Bruins is itself huge.

The second note: Don’t bother watching any other 3:30 games, since these three are all so big. You’ll have enough remote-control clicking to do with these games alone. 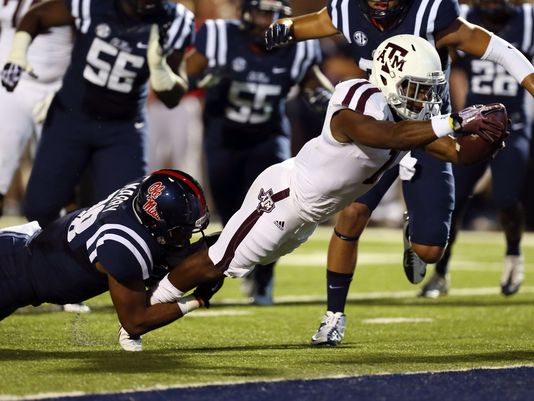 Ole Miss-Texas A&M is a huge game… and one that will not start at its listed kickoff time of 9 p.m. Eastern. You will need to pay close attention to how this game is handled from 9 to 9:45 Eastern time. Don’t say you weren’t warned.

Note: We’re amending the night window this week to include the 6 p.m. Eastern broadcast of Alabama-Arkansas on ESPN. More will be said about that 6 p.m. kickoff.

1) Ole Miss at Texas A&M, 9 p.m. Eastern, ESPN/WatchESPN — First things first: Do not expect this game to start any earlier than 9:13 or so, and probably not until 9:20. Second, it is a gigantic game. Ole Miss could thrust itself to the top of the SEC West with a win here. The Rebels have other tough games (Auburn, Mississippi State) at home. If they can survive this road test, look out.

2) Alabama at Arkansas, 6 p.m. Eastern, ESPN/WatchESPN — Alabama continues to be sloppy. If the Crimson Tide don’t clean up their act, Arkansas just might be good enough to pull off the upset. About the time of this game: You’ll note that ESPN has officially set aside only three hours for this window, with Ole Miss-A&M technically scheduled to be a 9 p.m. kickoff. We know that three hours is inadequate for a viewing window, so if you’re an Ole Miss or A&M fan, you need to be ready to watch the first quarter (or portions of it) on ESPNEWS or ESPN Classic, maybe a separate outlet. A platform such as WatchESPN might really come in handy here.

3) Houston at Memphis, 7 p.m. Eastern, CBS Sports Network — If the SEC doesn’t float your boat, catch Memphis, a team that has moved into The American’s title race. This could be the Tigers’ most challenging home game for the duration of the season.

4) Penn State at Michigan, 7 Eastern, ESPN2/WatchESPN — It’s the kind of game you watch for the externals:

How will the crowd in Ann Arbor react?

Will Brady Hoke be fired right after the game if Michigan loses?

Will James Franklin lie about something else?

5) LSU at Florida, 7:30 Eastern, SEC Network/WatchESPN — This is another game you might want to watch more as comedy and less as serious business (unless you’re a fan of either team, in which case… you are in our thoughts and prayers). Yet, it might be worth the watch precisely for comedic reasons, especially if your team suffered a gut-punch loss earlier in the day. 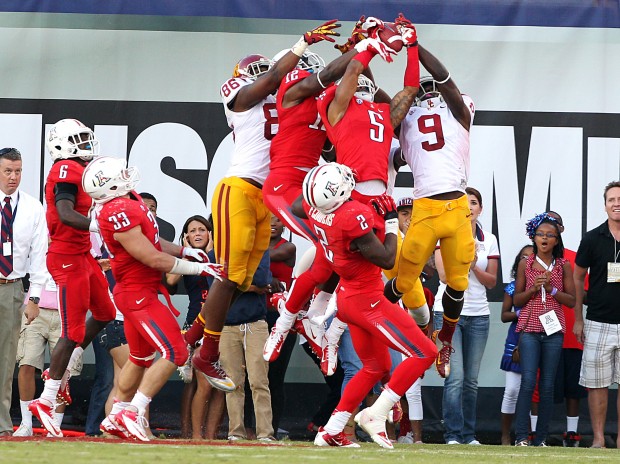 If the USC-Arizona game is decided by a Hail Mary pass… geez, just contemplate the reaction from the larger college football community (especially if Arizona is again the winner and USC is again the loser).

Arizona has never made the Rose Bowl, and it has never won an outright Pac-12 title. If the Wildcats win this game, they’ll have a clear lead in the Pac-12 South. Should UCLA lose to Oregon, Arizona will be in fantastic shape if it can fend off USC. This is a huge game, and it’s NOT on Pac-12 Network, thereby giving you no excuse to miss it.

* The three-hour window for Bama-Arkansas, followed by Ole Miss-A&M, almost certainly means some degree of chaos in the handoff from one game to the next. Be vigilant at or near 9 p.m. Eastern time, because ESPN will almost certainly have to announce an adjusted kickoff time for Ole Miss-A&M. The WorldWideLeader might also put the start of Rebels-Aggies on an alternate channel for the first quarter. BE. PREPARED.

* Look at the full schedule grid — you’ll notice something unusual: Only two games start at 8 p.m. Eastern. That’s not a common occurrence. Only six non-Hawaii games start after 7:30 Eastern. This is a schedule front-loaded with noon and 3:30 kicks. The night window is sparse, but the flip side is that the minimal amount of games gives you the ability to really focus on the choice offerings: Ole Miss-A&M and USC-Arizona.

* LSU-Florida and Penn State-Michigan are two examples of games that looked a lot better either last season or before the start of this season, but are ho-hum affairs now.

* Here are the games that didn’t seem like blockbusters before the season began, but have turned into mega-events in the present tense:

1) Auburn-Mississippi State, mentioned above in the 3:30 window

2) TCU-Baylor, also mentioned above in the 3:30 window

3) USC-Arizona, mentioned above in the late-night drive-thru window

Here are games you probably wouldn’t have given any thought to watching before the season, but might want to at least check in on this Saturday:

1) Houston-Memphis, mentioned above in the night window