This week in college football doesn’t crackle with electricity the way previous weeks did, largely because the 3:30 window — when the action is supposed to build to a crescendo — doesn’t have any heavyweight fights on the docket. The good stuff should emerge in prime time. A jam-packed night window plus a significant “late late show” in the Pac-12 should keep you up if you’re living on Eastern time. 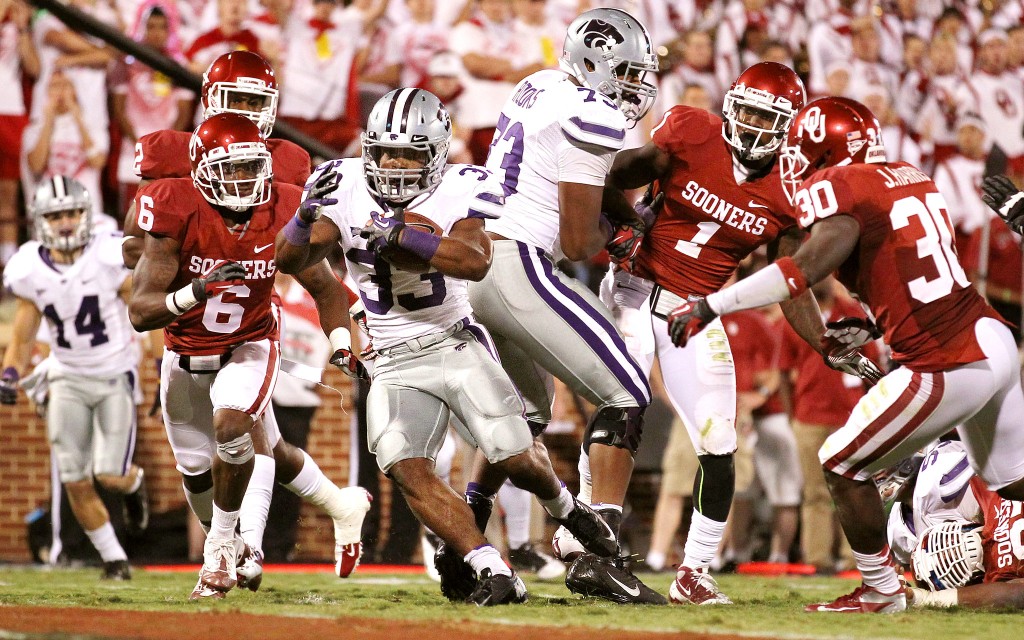 1) Kansas State at Oklahoma, ESPN/WatchESPN — This is a must-win for Oklahoma in terms of the Big 12 race, and a must-win for Kansas State in terms of the College Football Playoff race. The winner can still dream of playing Baylor for the Big 12 and then some. If Oklahoma — which has been struggling — can get by this game, the Sooners will get a much-needed bye week to regather themselves for the November stretch run.

2) Baylor at West Virginia, FOX — This game should be fun. A minimum of 75 points should be expected, very likely more than 90. It’s also significant: Baylor, coming off a long and emotionally exhausting win over TCU, will need to be alert and awake for an early start after one of the longer commutes in the geographically expanded Big 12.

3) Virginia at Duke, 12:30 Eastern, ESPN3/GamePlan — The GamePlan service has quickly become a waste of money, for the most part, before added channels and streaming services enetered the picture. However, this is one GamePlan offering with some meat on the bone. The winner of this game takes a crucial step forward in a crowded ACC Coastal, which the Student Section’s editors talked about this past Tuesday.

4) Iowa at Maryland, ESPN2/WatchESPN — Just a very intruiging mid-level Big Ten game, nothing more or less. That’s not spectacular, and it’s not bad, either. This rates as a solid fourth viewing option in the first window on Saturday.

1) Oklahoma State at TCU, 4:10 Eastern, Fox Sports 1 — The two best games in this window don’t actually start until after 4 p.m. That’s a rarity in general, but it’s even more striking in light of the fact that the 3:30 Eastern kickoffs the past two weeks have been absolutely spectacular. This week’s list of 3:30 games just isn’t that compelling.

2) Georgia at Arkansas, 4 Eastern, SEC Network/WatchESPN — The other big game in the four o’clock hour is this one. Arkansas still hasn’t won an SEC game under Bret Bielema, but the Hogs have been just one or two plays away from breaking through. If Georgia wins this game, the Bulldogs will likely win the SEC East as long as they can handle Kentucky. (Yes, that’s the world we now inhabit.) If the Dawgs lose, mercy, the SEC East could have a 4-4 division champion in 2014.

4) UCLA at California, ABC/ESPN2/WatchESPN — UCLA has to win this game.

5) Rutgers at Ohio State, ABC/ESPN2/WatchESPN — The Buckeyes are on the right track; will they retain their current level of form? 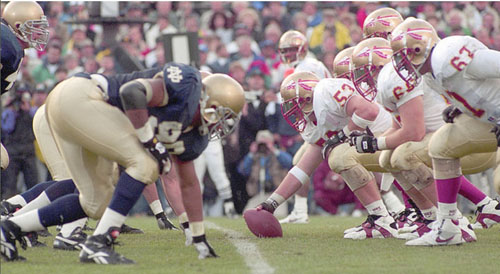 2) Nebraska at Northwestern, 7:30 Eastern, Big Ten Network — Of all the night games other than Notre Dame-Florida State, this is the best choice. The Huskers and Wildcats typically play games that go down to the wire. The Big Ten West is also a source of high intrigue at the moment. This game should be close in the fourth quarter.

3) Utah State at Colorado State, 7 Eastern, CBS Sports Network — Wait a minute. THIS is the third-best night game? Don’t laugh. Colorado State, with only one loss, is one of a few select teams that’s still in the running for a Gang Of Five premium bowl bid. The winner of this game stays in the Mountain West Mountain Division race alongside Boise State. It’s one of the bigger Gang Of Five conference games you’ll see all year.

4) Kentucky at LSU, 7:30 Eastern, SEC Network/WatchESPN — Kentucky has more to play for than LSU does on Oct. 18. That’s crazy. The next thing you know, Mississippi State will be No. 1 and the Kansas City Roy–

Yup, that’s sports for ya.

5) Georgia Tech at North Carolina, 7 Eastern, ESPNU/WatchESPN — It’s ACC Coastal unpredictability at its finest… and you’re likely to see piles of points in this game, too.

6) Tennessee at Ole Miss, 7 Eastern, ESPN/WatchESPN — This should be a drubbing, but the first half will certainly be worth watching.

7) Washington at Oregon, 8:10 Eastern, Fox Sports 1 — If San Francisco closes out St. Louis in Game 5 of the National League Championship Series, there’s a chance this game could be moved over to FOX, the network channel. As for the game itself: See the note attached to Tennessee-Ole Miss above.

8) Missouri at Florida, 7 Eastern, ESPN2/WatchESPN — We mention this game only to show how much of a non-event it has become.

1) Stanford at Arizona State , 10:30 Eastern, ESPN/WatchESPN — Both teams sorely need this game to keep division and conference title hopes alive in the Pac-12. Stanford destroyed ASU twice last season, so the Sun Devils — playing at home — know that they have to withstand the Cardinal’s muscle in the trenches. A win here would make Arizona State the team to beat in the Pac-12 South, given the head-to-head tiebreaker over USC.

The only problem is that Stanford has been ASU’s worst matchup in recent seasons.

* The packed nature of the night window compared to the barren nature of the 3:30 window is striking, especially in light of recent weeks.

* You know the season’s getting more interesting when the noon window has at least two appetizing matchups to offer. September is scarce; October brings the quality in the early part of a college football Saturday.

* Missouri-Florida and Texas A&M-Alabama are two examples of games that looked a lot better either last season or before the start of this season, but have lost a lot of zing.

* Here are the games that didn’t jump off the page when the season began, but have turned into intriguing options for a discriminating college football viewer:

1) Kentucky-LSU, mentioned above in the night window

2) Virginia-Duke, mentioned above in the noon window

3) Georgia-Arkansas, mentioned above in the 3:30 window

4) Utah State-Colorado State, mentioned above in the night window