It’s one of the laws of college football physics: When anyone says that a given week is going to be dull, at least in certain spots, that week — especially the supposedly dull game window — springs to life.

Last week, that law was violated. In the week-eight viewer’s guide, the 3:30 window was characterized in unflattering terms… and the 3:30 window proceeded to live down to expectations.

That’s not supposed to happen… but it did.

This week, more negative assessments await. The laws of college football physics need to come to the rescue. As always, concluding remarks follow the watchability rankings for each window.

1) Rutgers at Nebraska, ESPN2/WatchESPN — Last week, the noon window provided a lot of entertainment: Kansas State and Oklahoma produced a thriller; West Virginia upset Baylor; and the Big Ten delivered multiple shootouts. This week, the noon window looks as bad as San Francisco Giants pitcher Hunter Strickland has looked throughout the 2014 Major League Baseball playoffs. Give Rutgers-Nebraska a slight nod over Texas-Kansas State, if only because Nebraska might be just flaky enough to make things interesting. Kansas State should pound the living daylights out of Texas.

Tie, 3) Minnesota at Illinois, ESPNU, and Maryland at Wisconsin, Big Ten Network — These games tie because they represent different kinds of games. Minnesota-Illinois isn’t likely to be as close as Maryland-Wisconsin, but Minnesota rates as a bigger story and therefore a more important team to watch than Wisconsin at this point. You’ll want to watch more of the first half of Golden Gophers-Illini. Maryland-Wisconsin is the game you’ll probably watch more of in the second half, because it’s much more likely to remain competitive.

5) North Carolina at Virginia, ESPN3 — This could be a fun game, but who wants to watch North Carolina football this week after the revelations in Chapel Hill? Virginia’s stock is also down after a frustrating loss at Duke. 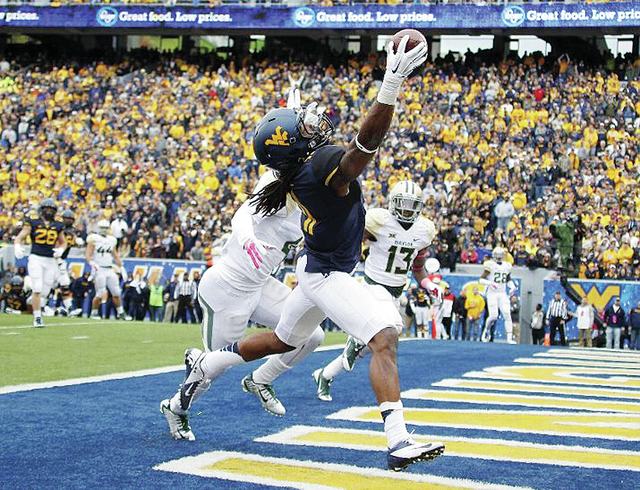 1) West Virginia at Oklahoma State, ESPN/WatchESPN — The Mountaineers defeated Baylor, and now need to show that they can back up that result on the road against a struggling but talented opponent. This is the best 3:30 game in terms of anticipated quality and closeness.

2) Mississippi State at Kentucky, CBS — This is the game most college football pundits will watch in the 3:30 window, at least in the first half, if they’re not covering another 3:30 game on assignment. The need to monitor and assess Mississippi State is so acute that the Bulldogs demand more attention than other teams playing at 3:30. This game will probably turn into a blowout, but the first half certainly demands scrutiny if you want to make an informed (continuous) evaluation of MSU and Dak Prescott.

3) Georgia Tech at Pittsburgh, ESPNU/WatchESPN — The “ACC Coastal Wheel Of Destiny Game of the Week.”

4) Michigan at Michigan State, ABC — This is likely to get very ugly.

5) Texas Tech at TCU, FOX — This is likely to get very ugly as well.

6) Florida Atlantic at Marshall, Fox Sports 1 — There are so many mediocre offerings in this window that you’ll have a chance to look at Marshall, a Gang Of Five bowl contender, and not feel you’re missing out on bigger games. Yes, we know Oregon State-Stanford is on in this window. It doesn’t make the cut due to Stanford’s three losses on the season.

1) Ole Miss at LSU, 7:15 Eastern, ESPN/WatchESPN — This series usually produces contentious and close games. This one doesn’t feel any different. The other SEC games in this window feel like blowouts, and the Ohio State-Penn State game also seems likely to be lopsided. You’re probably going to remain on this game whether you like it or not.

2) Arizona at Washington State, 6 Eastern, Pac-12 Network — Arizona fights for its life in the Pac-12 South, taking a journey to the Pacific Northwest and Mike Leach’s lair. Yes, this is a genuinely more interesting game than the other night offerings if you’re not attached to one of the participating teams, such as Alabama or Tennessee.

3) Alabama at Tennessee, 7:30 Eastern, ESPN2/WatchESPN  — This was Keith Jackson’s favorite game. No, not Bama-Tennessee, but Alabama AT Tennesssee. College football’s greatest television figure loved the sea of orange at Neyland Stadium whenever the Crimson Tide came to Knoxville. Enjoy the scenery. The game could remain close if Alabama’s road wobbles once again come into play, but on paper, this doesn’t feel like a barnburner late in the fourth quarter.

4) Ohio State at Penn State, 8:10 Eastern, ABC — It’s worth noting that the prime-time ABC game usually has an 8:12 p.m. kickoff, something that doesn’t appear in your advance television listings. Notre Dame-Florida State started at 8:22 Eastern last weekend, but that’s an exception, not the norm.

5) South Carolina at Auburn, 7:30 Eastern, SEC Network/WatchESPN — A classic example of a game that seemed to be a featured attraction before the season started, but has turned into an absolute viewing dud within the flow of the season. 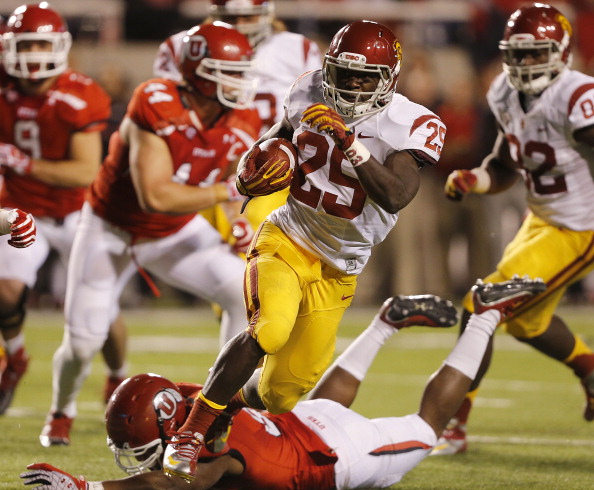 1) USC at Utah, Fox Sports 1 — The Pac-12 might have only one elite team, but the Pac-12 South race is compelling and unpredictable. This game in Salt Lake City will have a ripple effect on the rest of the division. If USC wins, the Trojans will become the favorite in the South, given their remaining schedule. If Utah wins, the division’s level of chaos will only increase. Utah plays both Arizona and Arizona State in November, so the Arizona schools are definitely rooting for the Utes here.

2) Arizona State at Washington, 10:45 Eastern, ESPN/WatchESPN — Washington isn’t a factor in the Pac-12 North after losing to both Stanford and (this past week) Oregon, but the Huskies will get a chance to play spoiler at home in Seattle, welcoming an Arizona school to the wet and rainy habitat that’s 180 degrees different from the desert. Arizona State needs to be able to back up its win over Stanford with another takedown of a Pac-12 North school. If the Sun Devils can get past this game, their head-to-head win over USC would set up a very fascinating November.

* Last week created some quality noon matchups. This week doesn’t come close. Last week had Notre Dame-Florida State anchoring the night window. Can Ole Miss-LSU save the day the way Irish-Noles did in week eight? There’s likely to be a lot of uninteresting football once again in the late-afternoon hours. Again, will the laws of college football physics intervene and pleasantly surprise us?

* South Carolina-Auburn, Michigan-Michigan State, Ohio State-Penn State are three examples of games that looked a lot better before the start of this season, but have lost a great deal of sizzle.

* Here are the games that didn’t figure to light up the night sky when the season began, but have turned into quality viewing options:

1) USC-Utah, mentioned above in the night window

2) Mississippi State-Kentucky, mentioned above in the 3:30 window

* Best game window: the late-night drive-thru window. Get your midnight snack in the Pac this week.