Two major storylines in college football converge this Thursday afternoon in Arlington, Texas. One is deeply rooted in the sport’s history, while the other is powerfully and centrally connected to the story of the 2014 season. Both are equally compelling, and that’s why the 2015 Cotton Bowl is easily the best of the non-playoff bowl games, a showcase worthy of a midday kickoff on Jan. 1, before the two playoff semifinals in Pasadena and New Orleans.

The larger historical backdrop for the 2015 Cotton Bowl is defined by a restoration of tradition. This game marks the true return of the Cotton Bowl to the center of the conversation in college football.

The Cotton Bowl, which began in 1937, is one of the four treasured bowl games that made New Year’s Day what it once was for generations of college football fans. Before the Fiesta Bowl became a New Year’s showcase in 1982 and reached a new level with the 1987 game between Miami and Penn State, the Cotton Bowl stood at the heart of the sport’s national title chase. The early-afternoon kickoff in Dallas, in a crisp sunshine shown here in the title-influencing 1984 clash between Texas and Georgia, was a regular part of life on January 1, appointment television for anyone who cared about the sport: 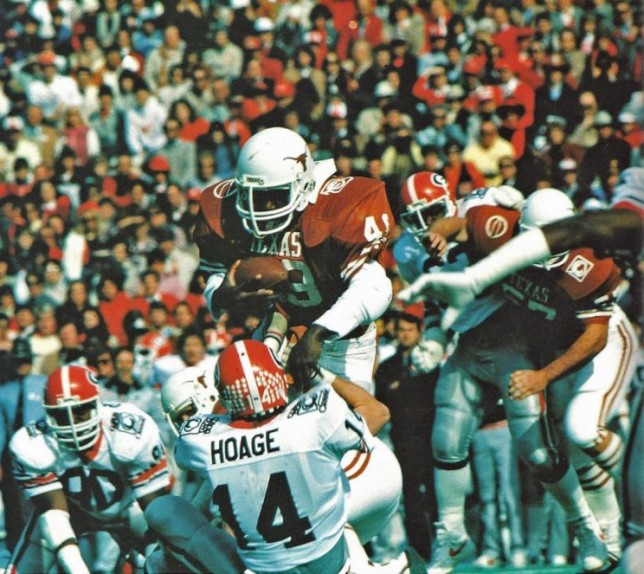 While NBC did broadcast a few Notre Dame-Texas A&M Cotton Bowls later in the day in the early 1990s (following a long run on CBS), there was still a consistent tradition in evidence at this bowl game, regardless of the start time: The Southwest Conference champion played in the game, something done with very few exceptions (such as 1940, when Clemson played Boston College). However, when the Southwest Conference died in 1995 and gave way to the Big 12 in 1996, the Cotton Bowl’s centrally defining feature ceased to exist. Schools in Texas, plus the University of Arkansas, were no longer at the heart of a chase to play in the venerable Cotton Bowl stadium on New Year’s afternoon.

In the late 1990s and on into the first decade of the new century, the Cotton Bowl become a second-tier bowl for runner-up or third-place teams, mostly in the Big 12 and the SEC. The move from the Cotton Bowl stadium to AT&T Stadium boosted the game’s profile on the first Friday night of January, but the game still wasn’t the same.

This year, with Big 12 champion Baylor hosting Big Ten runner-up Michigan State on New Year’s afternoon, this game looks right and feels right. It is back in the saddle as a meaningful January event in the larger story of college football. People who care about the perpetuation of tradition in college football, who love the rich familiarity of what New Year’s Day is supposed to mean, care very deeply that the Cotton Bowl has been restored on many levels. That’s the biggest part of this game off the field.

The on-field drama is quite delicious as well. 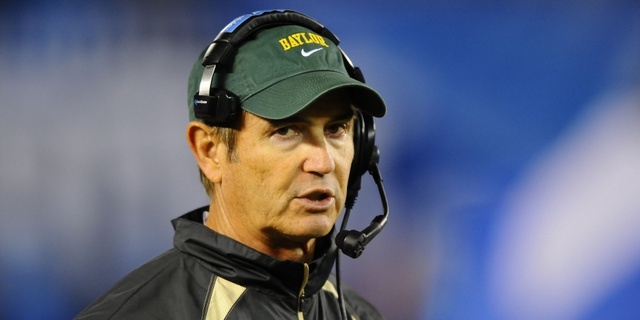 See that man above?

He’s still pissed off, and bluntly said so a few days ago.

Art Briles is livid that Baylor was kept out of the College Football Playoff. The Bears’ excellent coach — unlike TCU head coach Gary Patterson — has been breathing fire in the aftermath of his Big 12 team’s snub, which resulted in Big Ten champion Ohio State being elevated over the Bears and Horned Frogs for the fourth and final playoff spot.

The Big Ten versus the Big 12 — this became the central question of the playoff selection process. (Seedings represented a different and less consequential, though still newsworthy, item for commentators to dissect.) Therefore, the fact that Baylor is playing not Mississippi State, not Georgia Tech, not Arizona, but Michigan State, makes this game such a main-event centerpiece in the bowl lineup. This might not be a playoff game, but it certainly feels as though the playoff is being re-litigated in this game. Either Baylor will validate itself and the Big 12, or Michigan State will strike a big blow for the Big Ten. That’s the foremost national storyline in play for this contest.

Beyond that broader fight for affirmation, though, these teams face an even more specific challenge: Can they simply win a non-conference game of consequence? Neither one has achieved that fundamental goal this season.

Michigan State scheduled boldly, going to Eugene to play the University of Oregon on the road in early September. That move took guts, but the Spartans ran out of steam in a 46-27 loss to the Ducks, getting shut out in the final 25:55 while UO scored 28 points. Scheduling well deserves admiration, but winning tough games confers the highest level of respect. Michigan State is in this game because of a reputation established in last season’s run to Big Ten and Rose Bowl championships. This season’s Spartans haven’t really done anything to justify a top-10 national ranking, so this game means something powerfully personal for every player in the locker room, not to mention head coach Mark Dantonio and defensive coordinator Pat Narduzzi, who will then begin his tenure as Pittsburgh’s new head coach once this duel in suburban Dallas is done.

Michigan State’s pursuit of validation cannot be overstated… and yet it still pales in comparison to Baylor’s situation, which is even more urgent.

The Bears were gobbled up by Central Florida in last season’s Fiesta Bowl, despite being a huge pregame favorite. The Bears can’t cite New Year’s jitters or unfamiliarity this time around. If they fall short against the Big Ten’s second-best team, they’ll be reamed in the court of public opinion and will lose the right to say that their snub at the hands of Ohio State was unacceptable.

Baylor can’t do anything about winning a playoff semifinal. It can ensure that in the 2015 offseason, the playoff selection committee will be forced to confront the reality that the Bears — despite a soft non-conference schedule — were always worthy of inclusion in college football’s new championship-making event.

Art Briles is pissed off right now. He will be pissed off after this game… it’s up to his players to determine whether Briles will remain angry for positive or negative reasons.

That’s a pretty spicy stew to serve up on the eve of a Cotton Bowl which feels like The Cotton Bowl once again, after many years in the college football wilderness.