Much of Saturday’s game between the Alabama Crimson Tide and the Mississippi State Bulldogs represented that snoozer of a bad NFL game you’ve seen a million times — you know, the one with the number six announce crew for one of the two main NFL broadcast networks. For much of the day, Alabama and Mississippi State looked like the Oakland Raiders and New York Jets, slogging through their day with admirable effort but precious little quality.

Yes, the front sevens on both sides stood tall, but Tide-Bulldogs was replete with poor throws — both in terms of the trajectory of the passes and the initial decisions to throw the ball in the first place. Bama-Hail State involved numerous drops (including a few more by Amari Cooper, who can forget about a Heisman invitation), poor punting, a badly missed Alabama field goal (DRINK!), and a woeful outing by MSU’s Dak Prescott, who very likely played his way out of a Heisman finalist’s position. He’ll have one more really good chance to earn a ticket to New York on Nov. 29 against Ole Miss on CBS.

For much of the day, Alabama and Mississippi State had trouble getting out of their own way. Mississippi State hurt itself with a false start at the Alabama one-yard line late in the first half, forcing the Bulldogs to kick a field goal when three passes from the 6 failed. Both teams struggled to make fairly simple offensive plays on a consistent basis. Defenses forced some of these errors, but most of these failures were unforced. Alabama-Mississippi State bore a strong resemblance to the ragged and disjointed game played by the Tide and LSU a week earlier in front of Verne Lundquist and Gary Danielson.

One of these teams was going to win no matter what. As this game meandered toward the home stretch with Alabama leading by a tenuous 19-13 margin, the first point of importance for the Tide was to simply win a game they had led, 19-0, late in the first half. However, as much as “the bottom line is the bottom line,” there had to be a sense on the Alabama sideline that if an SEC West championship — and everything which can flow from it — was going to be attained, a dose of true excellence needed to come to the forefront. In order to put its stamp on the 2014 season, Alabama needed to not merely avoid losing; the Tide needed to seize this opportunity with both hands and leave a memorable impression on the minds (and eyes) of College Football Playoff voters.

Yes, voters should take the whole of Alabama’s sloppy win into consideration, but in fairness to the Tide, the 12 most important people in college football should also value what Blake Sims did when Alabama’s season hung in the balance on Saturday evening in Tuscaloosa. 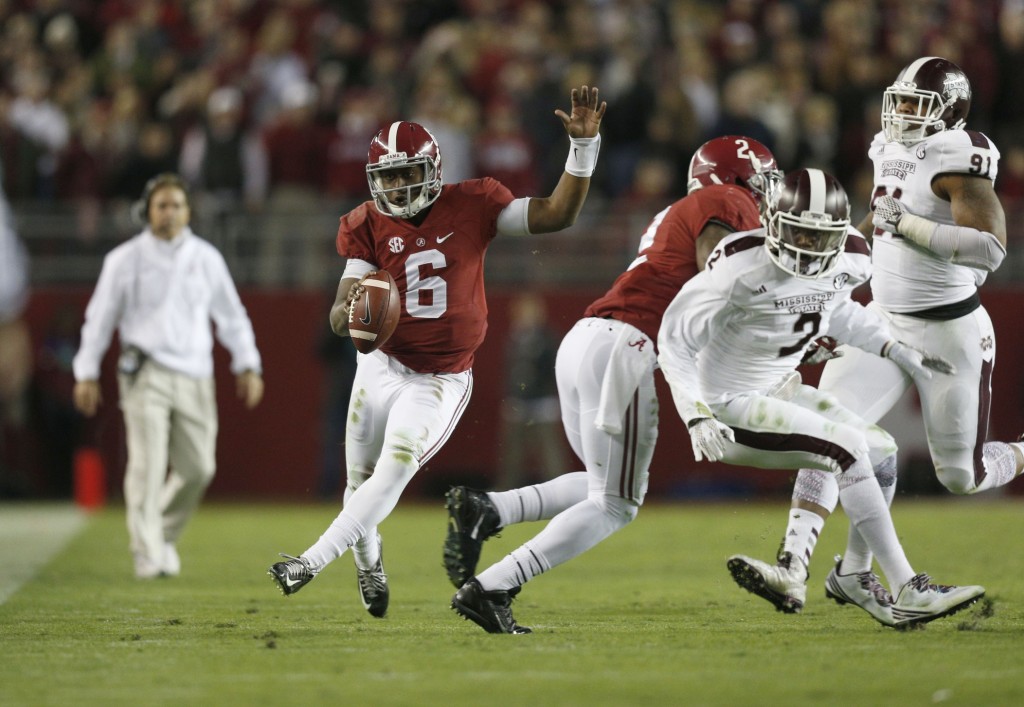 This was one of two terrific, tip-toeing tap dances by Alabama quarterback Blake Sims in the fourth quarter of Saturday’s game against Mississippi State. Sims’s footwork and awareness on two third-down scrambles represented the true hinge points of the contest. Without Sims, T.J. Yeldon wouldn’t have been able to salt this game away with a touchdown a few minutes later.

So much attention and scrutiny fall upon the shoulders of Lane Kiffin as Alabama’s offensive coordinator. Kiffin’s work against Mississippi State was mixed — not bad (some key passes were dropped, remember), but not great (Mississippi State’s pass defense should have been pushed out of position more often). However, at Alabama, players are supposed to own enough quality to rise above the fray in its most heated moments.

Blake Sims had endured a very up-and-down season. Very strong at home, wobbly on the road, but almost always good when his team and coaching staff really needed him to deliver. With Alabama leading by only six points after standing on the precipice of a blowout, all the pressure in the world flowed to the Crimson Tide. Their leader — the man everyone looks to in the huddle — had to show that he could handle the heat once again, much as he did on the final drive of regulation against LSU the week before.

How, pray tell, did Blake Sims meet the moment?

Third and eight at midfield: a 10-yard scramble, delicately weaving through two defenders before turning the corner and getting to the marker before going out of bounds.

Third and 10 at the MSU 40: a balletic display of footloose and fancy footwork along the sideline, beating the Bulldogs’ defense with dexterity and daring.

Those two escapes changed the entire mood of the game and enabled Bryant-Denny Stadium to breathe in the fresh oxygen of confidence again. Sure enough, T.J. Yeldon — Sims’s teammate and the man whose fumble a week ago almost cost the Tide against LSU — gained a second wind on the next few plays. He overpowered MSU’s defense for 29 yards on the next four carries, the final one a seven-yard touchdown run which gave Alabama a 25-13 lead with 8:09 left. Prescott threw one more interception, and for all intents and purposes, the SEC’s last unbeaten team had run out of good fortune.

Alabama now has a clear but difficult playoff path to follow. If Blake Sims, the crunch-time master, can become a more consistently excellent field general, the Tide of this season could turn even more in Nick Saban’s direction.