The USC Trojans are one of the foremost brand-name teams in all of college football. They attract attention in Los Angeles, a major media market. They become a publicity magnet when they’re good.

Why does USC get noticed? The Trojans have established a football history which gleams and glows. The program’s work over the course of many decades has created and sustained a high profile. For this and other reasons, a lot of national observers might have viewed Saturday’s late-night scrap between USC and Arizona as a story of how the Trojans — beaten by Arizona State on a Hail Mary a week earlier — were going to climb back into the Pac-12 South Division race.

It’s true: A USC victory stood to make the Pac-12 South a free-for-all, especially since UCLA had been hammered by Oregon earlier in the day. Five of the six teams in the division had already picked up at least one conference loss if not more. USC needed to avoid sharing UCLA’s fate by losing two straight league games and throwing away any last vestige of leverage it might have been able to claim. The USC side of this game certainly rated as an important story — for the Trojans themselves and for the Pac-12 South.

Yet, if you focused on USC as the centerpiece of this game, you looked in the wrong place. Arizona took the field Saturday night in a most unfamiliar spot: The Wildcats were the Pac-12 South’s only unbeaten team, both within and beyond the conference. Coach Rich Rodriguez had just guided his team to a road win at night on national television against the Oregon Ducks in Autzen Stadium, something few Pac-12 teams have been able to do over the years. A win over USC would have given Arizona both a head-to-head tiebreaker over the Trojans and a two-game numerical lead in the standings, thereby translating into a three-game overall lead. A triumph over the Pac-12’s most successful football program would have given Arizona a two-game numerical lead over UCLA (sans the head-to-head tiebreaker, which doesn’t exist yet for the two schools) and a generally commanding position in the division.

Why the intense focus on the division title for Arizona? It’s simple: The program’s biggest goals to achieve were (and still are) the Pac-12 South and the Pac-12 as a whole. Capturing division and league titles represents the combination of ways in which Arizona (like other power-five schools not in the Big 12) makes a top-tier bowl game, especially the bowl game that has eluded the Wildcats since they became a member of the original Pac-10 in 1978.

It’s true, and it can’t be said enough, even though it’s easy to get fatigued in the face of endless repetition: Arizona is the one original Pac-10 school that has never made the Rose Bowl. While the likes of Indiana, Illinois, Purdue, and even Northwestern have made a Rose Bowl in the past, Arizona hasn’t. It’s one of the central droughts — and most poignant snapshots of acute failure — in major college football. The Wildcats’ ability to gain total control of the Pac-12 South against USC is what made this game profoundly significant on a national level, arguably as much as the fact that a win would have given Arizona an increasingly more realistic shot at pursuing a College Football Playoff spot in the second half of the season. One of college football’s ceaselessly famished programs could have been able to entertain notions of a genuine feast.

What’s more is that — in much the same way that Baylor came up with a “lucky ducky” against TCU on Saturday — Arizona was in position to steal a win over USC, grabbing the kind of “grand theft pigskin” great single-season teams normally win at some point on the road to greater riches. Only a handful of teams (1995 Nebraska comes to mind) win titles without being threatened during a college football campaign. For most teams, historic seasons are built on the back of at least one Houdini, and Arizona was at the doorstep of its second unforgettable escape.

You’ll recall how Arizona scored 36 points in the fourth quarter to turn back California a few weeks ago. The Wildcats created one of the most amazing box scores (and drive chart progressions) the sport has ever seen. That defiance of death was amazing enough; now, Arizona was on the verge of rising from the dead yet again.

Trailing 28-13 with just over 13 minutes remaining, Arizona had once again slogged through three quarters with only 13 points to its credit, as was the case against Cal. However, whereas the U of A conceded 14 points to Cal and needed all 36 points to make up the difference (the final six on a last-play Hail Mary), the Wildcats’ defense was able to “Buck up” against Buck Allen, the stud running back who gobbled up 205 rushing yards for USC. Arizona blanked a stalling USC offense in the fourth quarter, and even though a tying two-point conversion attempt failed for the Wildcats with just over a minute (a buck?) left, the “Comeback Cats” were right on course when they recovered the subsequent onside kick, a perfectly executed high-bouncer special teams coaches dream of when they go to sleep each night. Arizona — playing with a tidal wave of fresh confidence, as had been the case in the fourth quarter against Cal — quite predictably moved into field goal range.

Unlike Washington State in the previous Saturday’s late-night game against the same Cal Bears, Arizona actually took care to center the kick. Casey Skowron had a 36-yarder all lined up with 17 seconds left. The Pac-12’s loneliest original Pac-10 member was just about to claim total midseason ownership of the South Division.

This is where one needs to appreciate what Arizona — as a program — once possessed.

In the 1980s, Arizona owned a great kicking game.

One of the great kicking families in football history — and more specifically, the history of college football in the state of Arizona — is the Zendejas family. Luis was a fine kicker for the Arizona State Sun Devils, and Max was a standout for the U of A in Tucson.

These were two of the proudest moments in Arizona football history. The nine-game unbeaten streak against Arizona State stands alongside the 1998 (12-1) and 1993 (10-2, Fiesta Bowl shutout of Miami) seasons as a mountaintop achievement for the program. Yet, even when Arizona excelled in the 1990s, it never did reach the Rose Bowl. It never did win an outright Pac-10 (now Pac-12) title. Spoiling an Arizona State season was the Wildcats’ greatest regular source of joy, and it came via the kicking game, as seen below in pictures: 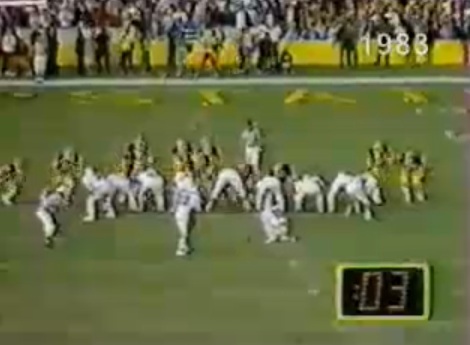 Arizona kicker Max Zendejas prepares for his game-winning field goal at the end of the 1983 Territorial Cup game in Sun Devil Stadium in Tempe, Ariz. This kick, if missed, would have caused Arizona to lose, since the Wildcats trailed at the time, 15-14. 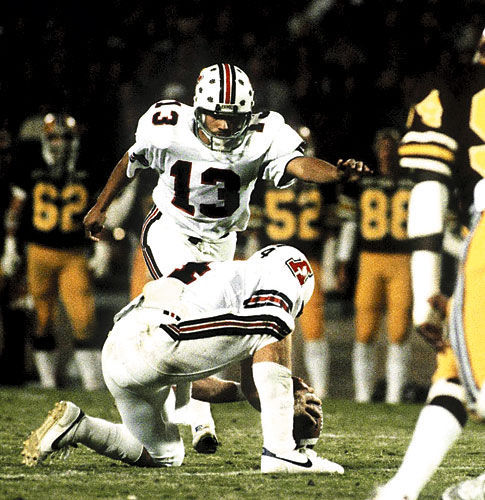 Two years later, Zendejas didn’t have to face the prospect of losing a game on a missed field goal. He broke a 13-13 tie with 1:43 left, and he also broke Arizona State’s heart on a 32-yard field goal in Tempe. Instructively, though, ruining an Arizona State season was the pinnacle of Arizona’s football existence in the 1980s. Actually winning championships eluded this program, and still does today. This is why Saturday’s loss to USC stings and resonates as it does.

The past so often serves as prelude to a new season’s events, and so, whether you like it or not, there was Arizona — on Oct. 11, 2014 — in position to not merely make an opponent’s season worse. The Wildcats, down 28-26 with 17 ticks left on the clock, were about to dig out of a nearly impossible spot to put the rest of the Pac-12 a few notches below their feet. Skowron, who had missed a 48-yard field goal earlier in the game and also had a 34-yard try blocked, gained a chance for redemption. The kick was centered, and an incomplete pass on third down meant the Wildcats didn’t have to rush the field goal team onto the field, Chinese fire drill-style.

The moment was there. Skowron was iced by USC coach Steve Sarkisian (who wisely chose to ice a kicker on a short kick; long kicks are when a non-icing approach is the better move), but 36 yards? Surely, an Arizona program that had lost hold of a good kicking game in subsequent decades could still take care of this kick.

Yes, Arizona has suffered awful losses over the past decade (the Mike Stoops era in particular) due to kicking-based lapses. In 2010, the Wildcats endured the mother of all stomach-punch losses, falling by one point to Arizona State in overtime (30-29) due to not one, but two, blocked extra points. Here was a chance for Casey Skowron to make a Zendejas-level name for himself, and transform the way Arizona football was seen on a national level. 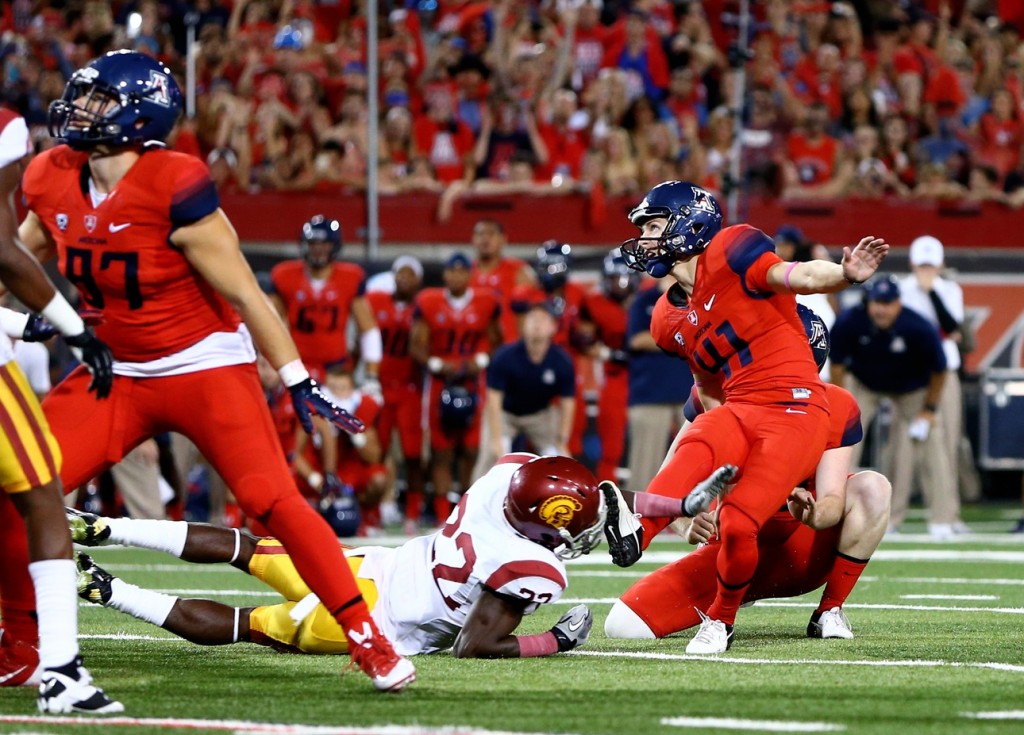 Casey Skowron had one of the biggest wins in Arizona history on his right foot this past Saturday night against USC. In line with Arizona’s sad and tortured football history — one bereft of an outright Pac-12 title in nearly 40 seasons as a league member — Skowron simply gacked on the kick, an ugly shank well right of the uprights.

His kick wasn’t even particularly close.

All the longing and passionate intensity.

The final drive, which achieved the twin objectives of setting up a manageable field goal and centering the kick as well.

All of it — every ounce of it — went for naught.

Such is the continuing history of Arizona football, still unable to shed its label as The Northwestern of The Southwest.