Now that Matt and Terry have offered their opinions on college football’s week one performances, it’s time to take a deeper dive into the SEC. Compared to some other conferences, which shall remain nameless, the SEC played a very competitive schedule in week one.

First let’s take a look at the two conference matchups…. 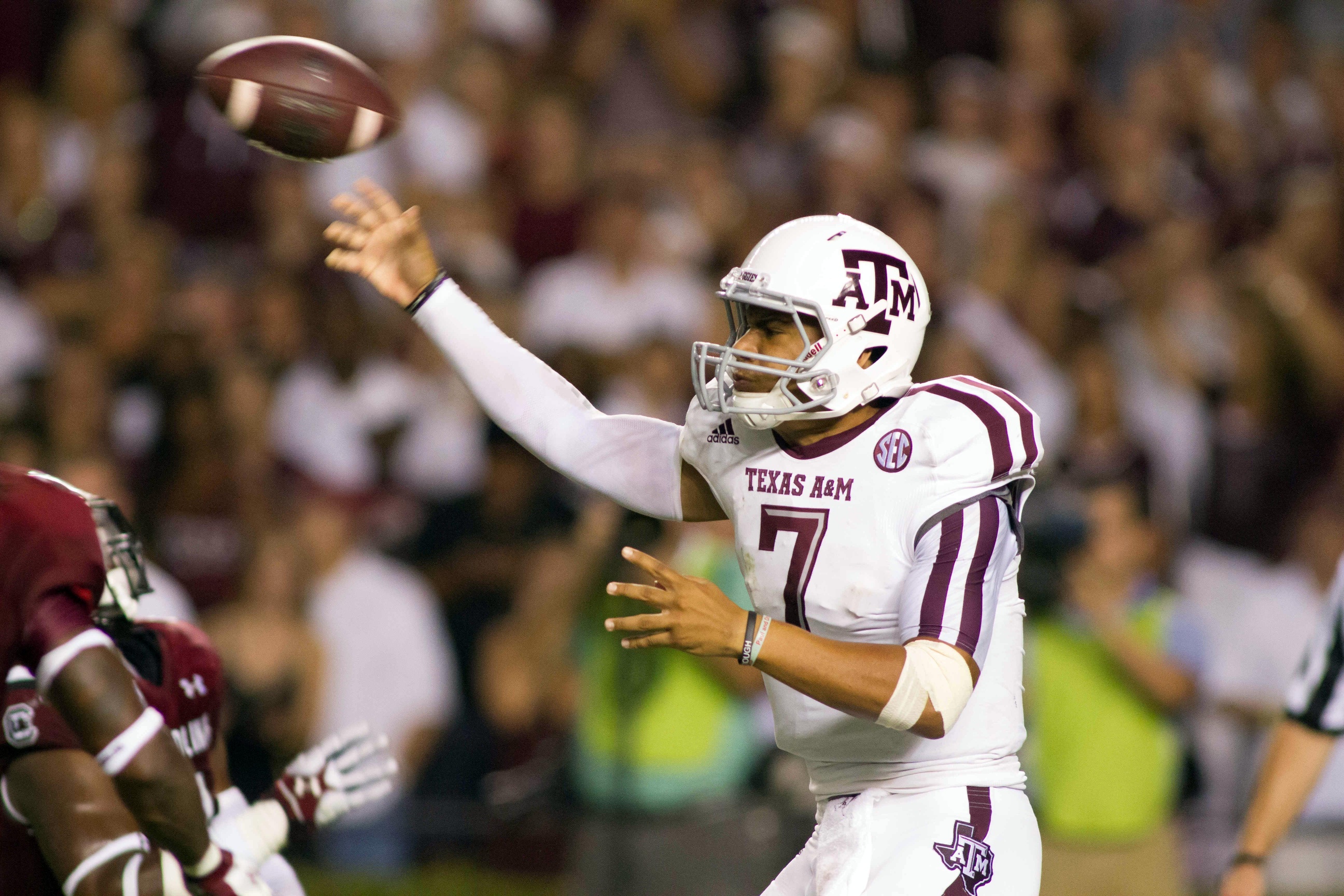 There is nothing like going into another team’s building as an underdog and just taking it to them. The Aggies completely flipped the script on the SEC season predictions with their performance in Williams-Brice Stadium.

Under the tutelage of Kevin Sumlin, first-time starter Kenny Hill already has people calling Johnny Manziel a “system quarterback.” I wouldn’t go that far, but it was a very impressive debut for A&M. Despite losing Manziel, Mike Evans and Ben Malena, the Aggies have playmakers all over the field on offense, and it looks as though it will take a special defense to stop them (or a special offense to out-score them). The Aggies seem to have taken the next step, and their schedule sets up very nicely for them (vs. Lamar, vs. Rice, at SMU, vs. Arkansas in their next four games).

For South Carolina, it’s back to the drawing board. I wrote about the importance of the Gamecocks having to replace Connor Shaw and Dylan Thompson really struggled in that role on Thursday. Without a running game, Mike Davis being banged up is a huge concern as the drop-off from him to back-up Brandon Wilds is substantial, Thompson never settled down and wasn’t able to take what the game gave him. In addition to the woes on offense, the Gamecocks’ defense was abysmal and was either ill-prepared for the game, which has not been the case during Lorenzo Ward’s tenure as defensive coordinator, or simply has a dearth of talent. We will gain a clearer answer in two weeks when Todd Gurley and his merry band of tailbacks come to town. 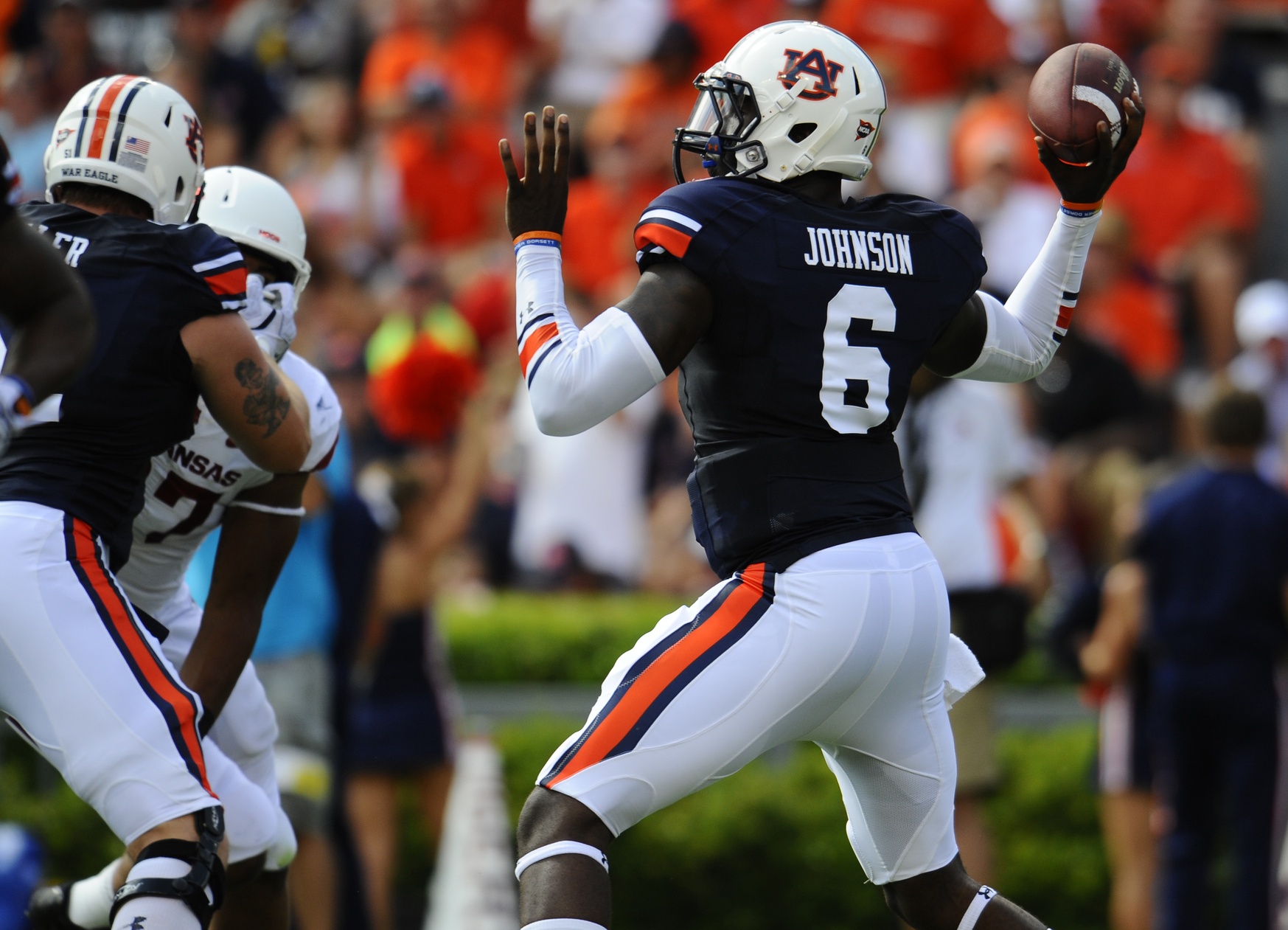 This was about what we all expected. Arkansas hung close until Brandon Allen threw a pick-six and then the tide turned, as Auburn never let the Hogs back into the game. If you thought Auburn was going to be a one-year aberration, you were wrong. Yes, the Tigers lost Tre Mason, but guess who they have back for a second year? Gus Malzahn. As Dickie V would say, he’s a PTPer. The Tigers have the offense to win the SEC and even the national championship; the question is if they have the defense. Arkansas proved it can hang for a half, but if it can’t find a consistent passing game or stop somebody on defense, it may stay in the cellar for another year.

Alabama, Georgia, LSU and Ole Miss passed the test, but with different grades 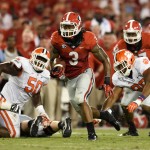 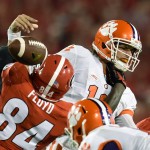 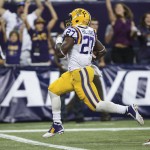 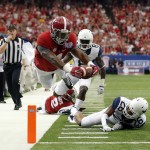 These four teams went out of conference with big first game matchups and all came up winners.

Georgia’s first half against Clemson looked very familiar to a 2013 team that never quite found its footing. However, when the Bulldogs came out of the locker room for the third quarter, everything changed. New defensive coordinator Jeremy Pruitt set the tone when his defense simply shut Clemson down in the second half.  This allowed Todd Gurley to take a page out of Hulk Hogan’s book and run wild on the Clemson defense. Georgia was so impressive in the second half of this game that many “experts” have vaulted the Dawgs into their early College Football Playoff predictions. Georgia has an off week this week before a rivalry game against South Carolina that will set up to be one of the most interesting early games in college football this season. The thing that impressed me the most and will be something to watch as the season continues is the adjustments Pruitt and the defense made in the second half.

LSU was dead and buried. Down 24-7 in the third quarter against a Wisconsin team that loves to pound the rock meant the Tigers were looking at a disappointing week one loss. Somehow the Tigers found their way back, and while they weren’t impressive the way Georgia and Texas A&M were, they ended up with a quality victory and had to dig deep with a bevy of young players to win this game. The schedule will now open up for the Tigers, and these young players will get a chance to learn to play together. When they face their next big obstacles, Mississippi State (Sept. 20) and Auburn (Oct. 4), we should see a different team.

Everything pointed to Alabama blowing out West Virginia in the Georgia Dome on Saturday. T.J. Yeldon rushed for 126 yards, Derrick Henry ran for 113, Amari Cooper had 130 yards receiving, and Blake Sims completed 24 of 33 passes. Those statistics point to a blowout Bama win, but West Virginia gave Bama all it could handle. Dana Holgorsen finally looked like he has WVU in a good place again; we will have to see just how many warts this Bama defense really has in future weeks.

Ole Miss struggled mightily on offense, as the Rebels battled Boise State and held a 7-6 lead well into the game. Bo Wallace was having a horrendous game with three interceptions… and then the floodgates opened for Ole Miss. All of a sudden the Rebels had four more touchdowns on the scoreboard. The Rebels are the biggest mystery to me after week one. Clearly they are talented, but they look to me like a team that could get shut out one week and then put up 50 the next week. My biggest question for now is if Bo Wallace is the guy to lead this team to where Hugh Freeze wants to take it. In week one, he didn’t show that he has improved much from when he stepped foot in Oxford for the first time.

The Vols looked good, and even though they played a team that is considered a good “mid-major,” I expected them to be up to the task on Sunday night. The Vols played within themselves, and the most impressive thing was the way the defense played. Quarterback Justin Worley had a nice game and he probably does give the Vols the best chance to win right now, but how far can he take them? If you are a Tennessee fan you should be thrilled with the win. Savor it, it’s been a while since the Vols have seen the light at the end of the tunnel. That said, a date in Norman against Oklahoma looms on the schedule in two weeks, so don’t get too far ahead of yourselves.

Kentucky, Missouri, Mississippi State – call me back when you actually play somebody.

Vanderbilt – you disgust me. Seriously, was James Franklin THAT good? I’m not sure I want to know the answer to that question.