Media days are winding down. Coaches are preparing to get to camp and whip their teams into shape for the coming season. It’s time for college football to move from media rooms to the practice field.

However, before Big Ten Media Days conclude and the focus on specific conferences gives way to a wider survey of the sport in August, there’s one final roundtable to convene in the month of July. In today’s second installment of our look at the Big Ten, we examine the changes that have occurred in the offseason, particularly the newcomers (Rutgers and Maryland) and the new divisional structure.

If you missed part one of our Big Ten editors’ roundtable, it’s here. For preseason predictions on the conference, see this piece by Bart Doan.

On with the show, as July — otherwise known as “media day month” — encounters its final few days.

Q. Other than New York subscriptions to the Big Ten Network, is there any other good reason for Jim Delany to have invited the Scarlet Knights to the conference?

Aside from adding TV sets in some high-profile markets, there was no reason to add Rutgers to the Big Ten… this year.

I won’t mince words: the Scarlet Knights aren’t adding any value to the conference right now. Sure, the team had some solid seasons under Greg Schiano, but the fact remains that Rutgers hasn’t beaten a ranked opponent since 2009, when it blasted South Florida 31-0.

That hardly sounds like a team that’s ready to compete for a B1G title.

However, there is hope for this year’s squad. Head coach Kyle Flood made one of the best hires in the country this offseason when he brought in offensive guru Ralph Friedgen. An excellent teacher of the game, Friedgen’s scheme has succeeded at both the college and the professional level. Given his vast expertise and experience, he should have no trouble turning senior quarterback Gary Nova into one of the best signal callers in the conference.

It’ll be interesting to see how it all plays out. Remember, in his first season at Maryland, Friedgen took a team that went 5-6 in 2000, and guided it to an ACC championship in 2001.

In 1997, there was a truly horrible movie called “Money Talks,” which starred Chris Tucker and Charlie Sheen and was pretty much like every Martin Lawrence movie made in the last 20 years. Anyways, not to drift too far from the point, but the title is pretty much the answer.

For all the guff the B1G gets routinely about the end result of the on-field product … which seems to be reported on a bit negatively by default by our precious media … the conference continues to win in the wallet, routinely out-earning every other conference in the nation with its slick business decisions and forward thinking.

Rutgers represents pretty much that. Roping in Rutgers means eyeballs in a major metropolitan area on the Big 10 Network, and lest you think Rutgers doesn’t have that type of pull, guess again. Reality is, BTN will be on every sports bar in the New York-New Jersey area now, and that’s a powerful cog in the machine.

Overall, the rest of the B1G gets a larger footprint on the East Coast, which is not only positive in a recruiting sense, but in terms of East Coast major metropolitan eyeballs that otherwise might not be looking at some of their teams doing so, becoming fans, buying merchandise, and basically, Money Talks.

The debacle known as Rutgers athletic director Julie Herrmann (who — like another athletic director in the Big Ten, Gene Smith of Ohio State — should have been fired by now) makes it very hard to see what value the Scarlet Knights will bring to the conference beyond the cable subscription angle. It’s surprising that Rutgers, knowing that its reputation is at stake, didn’t sack Herrmann when it knew its replacement for former athletic director Tim Pernetti just wasn’t going to cut it. Jim Delany has to be beside himself about the continued inability of Rutgers to separate itself from even the slightest suggestion of scandal. Herrmann is a national embarrassment. Accordingly, so is Rutgers.

Question No. 2: What is Randy Edsall’s ceiling in the Big Ten at Maryland?

Made of glass. Edsall set off the sensitivity police last week by claiming some sort of excitement that Maryland will now be going to a “football conference,” which proves that old associations die hard. The ACC has the reigning BCS champion and the B1G has been better in basketball than football of late, but just certain towns get labeled “baseball” or “football” towns, so too apparently do conferences and regions.

The realistic ceiling is consistently finishing fifth in the division. Three programs in the top 16 in wins all time and four above Maryland reside in the Terrapins’ division. Immediately, they’ll start off with a recruiting disadvantage not having as many contacts in the B1G region as the schools they’re playing.

This isn’t to say Maryland can’t be functionally acceptable on a consistent basis, but history is up against it. Whatever Edsall’s ceiling is, he’d be well advised to find it quickly. His record of 13-24 since accepting that post isn’t going to fly.

As many of you know, I listed Randy Edsall as No. 6 in my “7 Coaches on the Hot Seat” column from last Friday.

You’re invited to read the column, but here’s a quick list of the factors working against Edsall. While he’s increased the Terps’ win totals over the past three years, it bears repeating that the team hasn’t posted a winning record in conference play in his tenure. In addition, Maryland has also had trouble with ranked opponents under his watch, losing the last four contests by an average more than 35 points per game.

So, with that said, how do I think he will fare?

That depends on what metric is used. If the question is, “Will Maryland return to the level it was under Jerry Claiborne, Bobby Ross, and Ralph Friedgen anytime soon?”, the answer is definitely no. After all, the Terps have the burden of facing perennial top-25 contenders Ohio State, Michigan State, Michigan, and Penn State every year. Until UM gets a few more Big Ten recruiting classes under its belt, the best it can hope for is a 2-2 finish against that brutal slate.

On the other hand, if the question is, “Will Maryland compete for a bowl bid every season?”, the answer is “probably so.” Edsall’s squad has done a great job beating the teams it is supposed to, posting an 8-2 record (straight up) in games where it was the favorite.

If Maryland had been slotted into the West Division of the Big Ten, a perfect-scenario season would have been a division championship with five or six conference wins and a 9-3 overall record. In the East, though, the Terrapins’ hopes of merely making (let alone winning) the Big Ten Championship Game are slim to none. The realignment of the conference needed to give Maryland the right cards. The Terps were not dealt a winning hand.

Welcome to the Midwest, Mr. Edsall. Have fun.

Question No. 3: Should the realignment of divisions in the Big Ten adjust expectations for any particular program more than another, and if so, how should the coaching situation at this program be assessed? 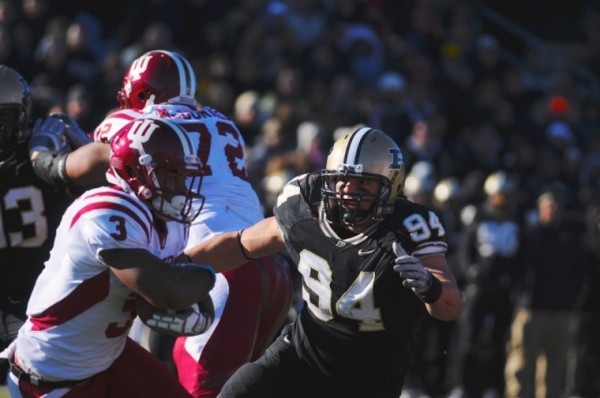 Indiana and Purdue both hope that divisional realignment in the Big Ten will offer opportunities for bowl seasons in the coming years.

In theory, it shouldn’t. Balance of power in a conference is such a cyclical process. What looks like an imbalance in one division will straighten itself over time.

For example, look at the SEC. When the league first split into divisions in 1992, the East dominated the league, capturing six of the first seven conference championships. However, the balance of power shifted starting in 2007, with the West winning six of the last seven.

It’ll be the same way with the Big Ten.

However, if I had to pick a short-term candidate, I’d say the expectations for Indiana must be adjusted. After narrowly missing out on the postseason in 2013, the Hoosiers return 17 starters and 59 lettermen from a year ago. Thanks to the new divisional alignment, IU has (relatively) winnable games against Maryland and Rutgers over the next two seasons. With a couple of “Ws” in those contests, Kevin Wilson’s squad will go bowling during that span as long as it takes care of business in the non-conference portion of the schedule.

Given the way the West Division has been constructed, Nebraska and Wisconsin should compete for many division titles over the next several years. Wisconsin, of course, reached three straight Rose Bowls and has established itself as a successful, highly-achieving Big Ten program.

The nation is and has been waiting for Nebraska, one of the great college football schools of all time, to re-emerge as a powerhouse and beat a team such as Wisconsin at its own game. Nebraska’s name should be able to be called upon, at least to the extent that the Huskers can once again enter the brightest spotlights and the biggest showcase moments of a given season. Bo Pelini was on the precipice of getting fired last season, but huge wins at Michigan and Penn State saved his hide. Now, with most of the Big Ten’s tougher teams in a separate division, Pelini has no real excuse to not win a division title. If Nebraska can’t knock the door down, Pelini should be shown the door. If you get an easier league schedule as a result of an adjusted split-division setup, expectations should definitely be elevated.

It’s gotta be Purdue, doesn’t it? Look, the real lifeblood of any roster in college football … or basketball … or any collegiate sport … is the depth, and you get that depth from your in-state recruiting ability.

That’s how you stock probably around 70 percent of your roster. Indiana has traditionally been an under-publicized state in terms of high school football even though there are good players within state lines. But high school football in the state pales in following to high school basketball, so the talent mostly gets overlooked by national recruiting pundits and “Star Sites.” That said, when there are elite kids within state lines, your big name national schools come and purge them.

Oh, and then there’s Notre Dame. So there’s a premium on getting that in-state talent for Purdue and Indiana, and basically, Purdue is maybe 15 minutes of a drive more west of Bloomington, so the Boilermakers get the markedly easier division.

As aforementioned here, there is some serious traditional weight in the B1G East that’s never going away, while the West lacks that historical muscle. Nebraska is really the only team in the division that would appear on anyone’s top 10 list of college football programs all time while Michigan, Ohio State, and Penn State are almost automatic locks.

This trend means Purdue, probably down the road, has a better chance to sell playing in the B1G championship and more consistent bowl seasons than its in-state rivals, which will in turn mean hauling in the top in-state recruits. I know this is a lot to take in and the logic isn’t as black and white as one would prefer, but go with me on this one. Realignment really won big for the Boilers.