We finally have games to review. It’s one of the best feelings any group of college football chroniclers can have.

The editorial staff at The Student Section evaluates the two neutral-site games that turned out to be a lot closer than many expected. We also identify the off-the-radar developments from week one that are worth noting.

Question No. 1: Which team had the better loss on Saturday — Oklahoma State or West Virginia?

Discussing the “better loss” is a lot like asking your buddies which Creed album they thought was the best, but in the world of college football, poll people use things like “good losses” to justify where teams land late in the season.

So consider the Big 12 apparently late ‘90s alternative rock. “Better loss” would also indicate which will be less damaging to the respective team going forward, and that’s pretty much a crapshoot because you can’t get into the minds of the people that actually matter. Odds are, neither West Virginia nor Oklahoma State will be fighting for a playoff spot (sorry, just being realistic, I like both of y’all).

I’ll go with Oklahoma State in this case, though, because the feeling from watching both games is that Florida State made less obvious mistakes than Alabama. Blake Sims consistently missed open receivers, and Bama’s secondary tackled like Bama’s secondary before Nick Saban came along. It doesn’t take away from how well the Mountaineers played, and really, no one feels good about a loss. Whether it’s deemed “good” or “horrible,” it’s still 0-1.

While each team should be proud of how it played, I’ll say that Oklahoma State’s loss was the better of the two.

The last statement should not take any of the luster off West Virginia’s performance against Alabama. The Mountaineers did an excellent job of executing their game plan, and made the Crimson Tide earn everything it got. By playing the projected SEC champion dead even for most of the afternoon, Dana Holgorsen’s team earned the respect of every college football fan in the land.

With that said, Oklahoma State’s victory was more impressive because it came against the best team in the land. Unlike Alabama, which still has a couple of question marks to figure out, the Seminoles are the most complete team in the country, returning 14 starters from last year’s national championship squad, which won by an average of 39.5 points per game. The fact that the ‘Pokes had the ball with a chance to take the lead against FSU with five minutes remaining leaves little doubt that they can compete with any team in the country.

There’s no bad answer here, because West Virginia and Oklahoma State were both impressive in their own ways. West Virginia dictated the flow of the game more than Oklahoma State, but the Cowboys showed more resilience than the Mountaineers. West Virginia actually had a better chance of winning, which is a credit to the Mountaineers in one real sense, but WVU did more things to sabotage its pursuit of victory than OSU did. The river of dropped passes by the ‘Eers took prosperity out of their own hands.

West Virginia really should have done better than it did on the scoreboard, since it squandered so many forays inside the Alabama 35. On the other hand, Oklahoma State is the team that applied more late-game scoreboard pressure to Florida State.

You can choose the example(s) you’d like. In light of everything said above, though, I’ll rate the team that actually applied more scoreboard pressure higher than the one that left more points on the field. Oklahoma State it is, then.

Question No. 2: Which team had the worse win on Saturday — Florida State or Alabama? 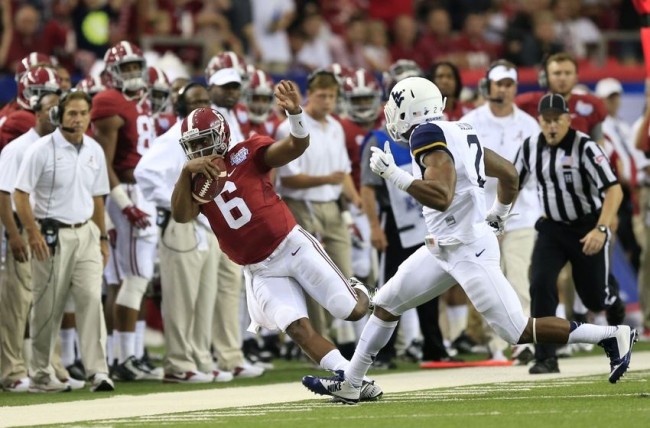 Alabama was shaky at times on Saturday, but quarterback Blake Sims (pictured) found his footing. Alabama offensive coordinator Lane Kiffin — for all the jokes and barbs hurled in his direction on College Football Twitter during the game — actually did a pretty good job with a new signal caller. It’s Alabama’s defense which has to improve to a much more considerable extent in the weeks ahead.

Of all the questions we have, this – for me – is probably the most impossible one to answer that we’ll ever do. Anytime you win … by 1 or 100 … you get out of Dodge feeling good. Never have I personally walked away and said, “Well, that win sucked.”

You walk away sometimes saying, “We really didn’t play very well and have to clean a ton up, so practice will be some kinda fun tomorrow,” but you never lament winning. It’s hard to do.

So I sort of punt this one, honestly. It’s the first week of the season and both Florida State and Alabama sacked up and played big time opponents from a power conference on a neutral field, when you go into the game knowing less about your team than you ever will at any other point in the season.

Oh, and I’d imagine for both teams, practice this week will be mighty fun. Complacency is the devil in sports, and both coaching staffs should have plenty to kvetch about going into week two.

Which win by college football’s last two national champions was less impressive on Saturday? The prism through which you view the question will define your answer.

Your mileage may vary, and it’s fine for that to be the case. To me, though, a worrisome week-one win (a nice problem for a coaching staff to have, by the way; give me that more than an encouraging loss anytime) is one which exposes weaknesses that might persist as the season goes along.

According to that standard, Alabama had the worse win in a two-way comparison with Florida State. The Crimson Tide have serious problems with their back seven. Texas A&M can throw the ball. Auburn, with Jeremy Johnson, can bring in a throwing quarterback in the Iron Bowl this year. I trust Jameis Winston and Florida State’s non-Rashad Greene receivers to figure things out over the season. I’m not sure I can trust Bama’s back seven to the same extent.

At the risk of stating the obvious, there’s no such thing as a bad win. As long as a team exits the gridiron with a victory, style points don’t matter (regardless of what the College Football Playoff brass wants us to believe).

However, to answer the question, I’ll say that Alabama’s win was less impressive than Florida State’s. The usually stout Crimson Tide defense had absolutely no answers for Clint Trickett, who completed 29 out of 45 passes for 365 yards and a touchdown. The defense also failed to produce a turnover for the first time in the last eight games.

That’s not exactly a stellar showing against a team was picked to finish eighth in the Big 12 preseason poll.

But, it’s important to remember that this was the first game of the season. As any college coach will tell you, teams always show the most improvement between the first and second games. Assuming the Tide continues to get better each week, people will forget all about what happened on the gridiron Saturday.

Which goes back to my initial point that there’s no such thing as a bad win.

Question No. 3: Which off-the-radar game result from week one captured your attention the most?

To me, there are two things from the weekend that stood out… and which people aren’t talking about.

First, Charlie Strong’s debut at Texas was a smashing success. Under the leadership of Strong and new coordinator Vance Bedford, the Longhorn defense looked like a championship caliber unit, limiting North Texas to just 94 yards of total offense. And before you say, “Big deal, it’s only North Texas,” it’s worth mentioning that the Mean Green finished 9-4 last year, including a win over Conference USA champion Rice.

While that’s not exactly the same thing as stopping Oregon or Baylor, it does show how far the defense has come from a year ago, when it allowed a whopping 407.2 yards per game.

The other thing that went largely unnoticed is Wisconsin’s struggles in the passing game. Tanner McEvoy was extremely ineffective in his first start completing only 8 of his 24 passes for a paltry 50 yards with two interceptions.

That’s an average of just 2.1 yards per attempt with a long of 11 yards.

Those numbers ought to terrify every Badger fan. Without the threat of a downfield passing game, there’s nothing to stop opposing defenses from loading the box to stop Melvin Gordon.

Yet, strangely this topic didn’t come up very often when recapping week one.

While everyone was understandably jolted into a state of awareness by Texas A&M’s masterclass on grass against South Carolina on Thursday, and while other SEC watchers took notice of Georgia’s thumping of Clemson on Saturday, a Friday night drubbing caught my eye.

That’s the question folks in Bowling Green, Ky., are asking after Western Kentucky defeated the Bowling Green (Ohio) Falcons by a 59-31 score. Western Kentucky’s wipeout of the defending Mid-American Conference champion was a small-conference version of A&M’s win in South Carolina. A&M and WKU both moved the ball down the field in 12-, 15-, and 18-yard segments, never getting 60- or 80-yard home-run balls but steadily completing the short-intermediate pass. Western Kentucky’s shortest scoring drive in terms of length was 63 yards. Its shortest drive in terms of plays was six. New coach Jeff Brohm had this team more prepared on offense than Bobby Petrino ever did. It was an essentially perfect offensive performance against a good team that was (and still is) expected to perform well this season.

This next game caught my eye off the radar because one, it was definitely off the “normal time to be awake” radar; two, it got my first “why are you up watching this?” look of 2014.

Deep into the night, Washington ushered in the Chris Petersen era with utter survival in a 17-16 win against Hawaii. Washington has been sort of a back-end top 25 darling to folks, obviously buoyed by the belief that Petersen’s wild success at Boise State will seamlessly translate over to Seattle.

But week one was a struggle against a Hawaii team that yeah … the Warriors should be improved from the 1-11 outfit of last year … but certainly doesn’t come in looking like world beaters or contenders in the Mountain West (which had a rough go of things in week one).

Granted, for Petersen, it’s not a bad way to start a new gig. “Here. These are the keys to our sleeping powerhouse football program. By the way, first assignment? All expenses paid trip to Hawaii.”

But Washington will need to be better. The running game bailed out UW late and allowed the Huskies to get out of there with a narrow win. Improved play will be needed in the stout Pac-12.