It’s the kind of topic that lights up talk radio, Twitter, and the space in front of the water cooler in your work office on a Monday morning.

It’s also the kind of topic that demands a fair hearing for both perspectives.

Just exactly how should a head coach handle a situation in which his team trails by one to three points inside the final 10 seconds of regulation and is staring at a fairly long field goal, but not on fourth down? Should a coach try to have his quarterback throw an extra pass to get closer, or should he not take a chance and therefore send on the field goal unit without delay?

Were his first instincts or his adjustments the more correct response to the situation?

Let’s go over the details.

When a coach faces a final-10-seconds field goal when trailing by one to three points, two primary considerations emerge, and they flow into a larger reality.

The first consideration for a head coach in Freeze’s position is time. In the final 10 seconds, there’s not complete unanimity on the matter, but for a considerable portion of coaches and strategists, the line of demarcation is generally six seconds. With that much time on the clock, you can go either way in terms of thinking that you can fit in one scrimmage play (a seven-yard out pattern to the sideline) before a field goal. In the NFL, an Aaron Rodgers or a Tom Brady could probably manage to fire off a five-yard dart in three or four seconds, meaning that with 0:05 on the clock, you could probably trust an elite pro quarterback to fit in one play and still leave time for a field goal. In the college game, more caution is warranted, such that five seconds should mean a field goal in almost all circumstances. If a college coach is reluctant to try for one more play with six seconds left, that’s perfectly reasonable. Seven seconds, however, should provide enough of a comfort zone for a coach to chase five to eight more yards. Eight or nine seconds should be enough to try to chase 10 yards, maybe even 12. By this standard, Freeze’s ultimate decision to pursue more yardage was entirely sound.

The other primary consideration for a head coach in this situation is the extent to which he trusts his quarterback. This is a product of multiple realities, but the main factor here is experience. Is a coach familiar enough with his field general that he implicitly trusts him to make plays in a full range of maximum-pressure, high-leverage spots? This is where fans surely split into different camps on Hugh Freeze’s decision against LSU, because Ole Miss quarterback Bo Wallace has a history of being unwise with the ball. This version of Wallace coughed up multiple turnovers in the Rebels’ season opener on Aug. 28 against Boise State.

The plot complication for fans skeptical of Wallace is that over the past month, “Dr. Bo” exhibited sound decision making. He got out of the way on a defense-first team, sacrificing glamorous stats for the greater good. A patient, sensible Dr. Bo is what Freeze had been wanting to cultivate in Oxford, and that version of Wallace was especially evident in the breakthrough win over Alabama. Wallace played cleanly but unspectacularly, shedding his old skin and leaving behind his former reputation as a player who would amaze and confound on the same drive, sometimes even on the same play. After the familiar Dr. Bo rollercoaster ride against Boise State, this new and improved Wallace gave Ole Miss the stability it needed, enabling the Rebels’ bonecrushing defense to win games.

If the old and erratic Dr. Bo had been more in evidence over the past month, the case for kicking the field goal with nine seconds left would have been much, much stronger. As it was, Freeze had ample reason to trust Wallace to make a basic assessment of the situation and throw the ball away if the 10-yard out to the sidelines wasn’t there.

This brings up two important points:

1) While the old, bad Dr. Bo had been in hiding over the previous month, that version of Wallace returned for much of this game against LSU. Freeze could have felt that since Wallace wasn’t playing well within the context of one game, that was enough reason to kick the field goal. Fair enough.

2) Freeze obviously eschewed the above option — he did feel Wallace could make a play. If you watched the game live, you saw — courtesy of the ESPN production truck, which did a great job covering the sequence and its aftermath — Freeze reacting in utter disbelief after Wallace’s game-sealing interception. The calculus of the moment was not complicated: Wallace was to try to get more yards, and if no route — short or down the field — opened up, the ball was supposed to have been thrown away.

It’s not hard to understand this basic point: If, as a head coach, you’re guiding a freshman or a backup unexpectedly thrown into the fire, you probably kick the field goal, because if your quarterback is inexperienced, a more cautious approach is warranted. It’s the kind of approach football coaches of an older vintage have stressed for years and years — it’s probably what your grandfather taught you about football: “There are three things that can happen when you throw a forward pass, and two of them are bad.” This mentality is understandable, but this is a quarterback-centric sport these days. College football is no longer dominated by the running back as it was through the early 1980s. If you, as a head coach, trust your quarterback, you will let him try to throw a pass with more than six seconds left in the kind of situation Ole Miss faced against LSU. 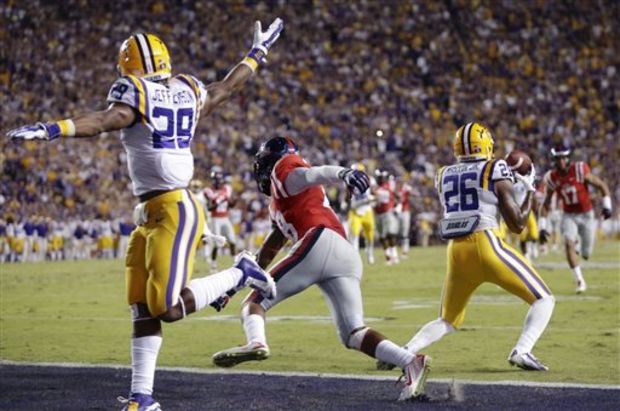 Let’s tend to a few other considerations from the Ole Miss-LSU endgame:

A) Ole Miss kicker Gary Wunderlich had made a 46-yard field goal earlier in the season against Alabama. On the other hand, Wunderlich had attempted only four kicks, making three, and that 46-yarder was his only made kick of 40 yards or longer. A coach could have gone either way in trusting his kicker, but small sample size was certainly a concern, especially since this was a road game, unlike the Alabama contest.

B) Freeze’s biggest error in the final nine seconds of the LSU endgame was his hesitation when considering whether to kick or run a scrimmage play when Ole Miss had the ball at the LSU 25. A 42-yard field goal was much more reasonable as an “instant kick” option, though getting the kick into particularly comfortable range would still have been recommended. Once Ole Miss committed a delay-of-game penalty, however, the 47-yard length made it much more important for Freeze to gain more yards.

C) More about the length of the kick: A 47-yard field goal is made more often than missed in the pros. The “more makes or misses” break-even point has steadily risen in the NFL over time. Kickers have gotten better and better in comparison to the “straightforward kicker” era, which felt like the days when dinosaurs roamed the Earth. In college, a 47-yarder is not as sure a bet. The #CollegeKickers hashtag on Twitter (do a search when you have the time) affirms this. More to the point, we’ve seen kickers from Washington State and Oklahoma (Michael Hunnicutt had been an outstanding kicker to that point in his OU career) miss go-ahead 19-yard field goals within the final five minutes of regulation this season. Should a coach pass up a chance to get 10 yards closer when he can clearly pursue it?

Everything that’s been said above flows into one overarching core reality about coaching, especially in endgame situations: The object of the strategic dimension of coaching is to give your team the best chance to win, which often manifests itself as giving your team different avenues to the same end goal of victory. If, as a coach, you kick the field goal with nine seconds left, you’re leaving a play on the field. You’re denying yourself an extra snap, in much the same way that Penn State — with its dead-clock spike of a ball late against Ohio State on Saturday night — also robbed itself of a down it could have used.

If you don’t trust your quarterback, it’s definitely worth it to not pursue the extra scrimmage play in search of an additional 10 yards. If you do trust your quarterback, though — that really is the crux of this issue (one person’s opinion, of course) — you should never hesitate to run one more play if there are at least seven seconds on the clock, even with no timeouts. Running a seven-yard sideline pattern is as basic as football gets. If you’re mortally afraid of something bad happening, you probably haven’t coached your quarterback or receivers very well in the first place.