While the present moment is definitely a happy one for both the Arizona Wildcats and the Boise State Broncos, there’s usually an undercurrent of “what might have been” attached to many of our satisfactions in life. This is very much the case on the eve of the second 2014 Fiesta Bowl (since it is being played on Dec. 31 and not in January of 2015).

The Arizona Wildcats are the only program from the Pac-10 Conference that has never made the Rose Bowl, and as commentator David Wunderlich of SB Nation has pointed out, the Wildcats would have been Pasadena-bound if the College Football Playoff semifinals had not included the Rose Bowl this season. Oregon would have made its way to the playoff, and Arizona would have slid into the Granddaddy, breaking one of the great spells/hexes/O-fers in college football history.

Arizona turned the Pac-8 into the Pac-10 when it joined the league alongside Arizona State in 1978. The Wildcats’ inability to make one Rose Bowl is very much akin to the Seattle Mariners being the only American League team to have never made the World Series since becoming a franchise in 1977. They’re still waiting for “the first time” in Tucson, and so while this trip to Glendale — a short drive northwest to the greater Phoenix area — comes as a pleasant surprise, it also carries the reminder that this program’s greatest aspirations remain unfulfilled.

For the Boise State Broncos, this journey to the Fiesta Bowl is also a happy one. As is the case with Arizona, if you had told the BSU fan base before the season that it would be playing in Glendale on New Year’s Eve, not one person would have refused to sign an agreement on the dotted line.

Boise State entered this season with plenty of questions, chiefly the ability of former Chris Petersen assistant Bryan Harsin to maintain the winning identity his predecessor so firmly established in the northwest corner of the country. The Broncos lived under the cloud of “When Would Petersen Leave?” for the last few years of “Coach Pete’s” tenure, so the outpouring of anxiety which greeted Petersen’s departure to the University of Washington was only natural. Harsin’s body of work this season — especially his ability to improve quarterback Grant Hedrick in the face of a midseason injury to star receiver Matt Miller — has shown Boise State fans why he was the natural choice to replace Petersen. The program is in very good hands, and this trip to the Fiesta Bowl is a reward for the performance of Harsin and his players.

Yet, even as Boise State makes a return trip to Glendale — the scene of the program’s two best moments in 2007 (Oklahoma) and 2010 (TCU) — the Broncos are reminded that this preferred travel plan was denied to two of the better teams in school history.

The 2010 and 2011 teams — both in terms of the “eye test” and in terms of overall resume — were unquestionably better than the 2014 Broncos by almost every possible measurement. Yet, the particularities of the Bowl Championship Series process locked the Broncos outside the candy store.

In the 2010 season, an 8-4 Connecticut team made its way to the Fiesta Bowl as the Big East champion. Boise State, with only one loss, shuffled off to the Las Vegas Bowl. The Virginia Tech team Boise State defeated in a neutral-site game (one played relatively close to the Hokies’ campus) also went to a BCS bowl because of a conference championship lock-in.

In 2011, Boise’s BCS bowl snub was even worse. The Broncos beat eventual SEC East champion Georgia in Atlanta (and handily at that) in the season opener. They suffered their only loss by one point to Mountain West champion TCU. The Broncos and Kansas State made a natural fit for the Sugar Bowl, but the pull of economics and television brand names brought ACC runner-up Virginia Tech and Big Ten at-large selection Michigan to the Superdome instead. The preciousness of this moment for Boise State fans is magnified by the injustices of those 2010 and 2011 seasons.

The point is plain: While joy is the predominant feeling for both schools as they prepare for this game, the wounds of history lie just below the surface. There’s power in such an awareness, and it sets the tone for this game and what it means to each program. What will make it easier to wash away the pain of the past in Tucson and Boise is the fact that the Fiesta Bowl has been a happy home for each school.

How about seeing these three photos and allowing them to speak for themselves? 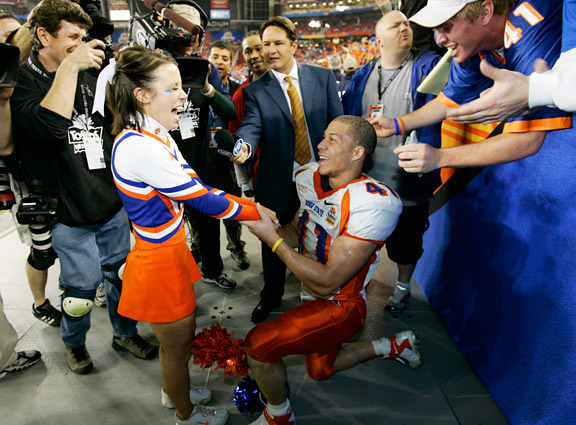 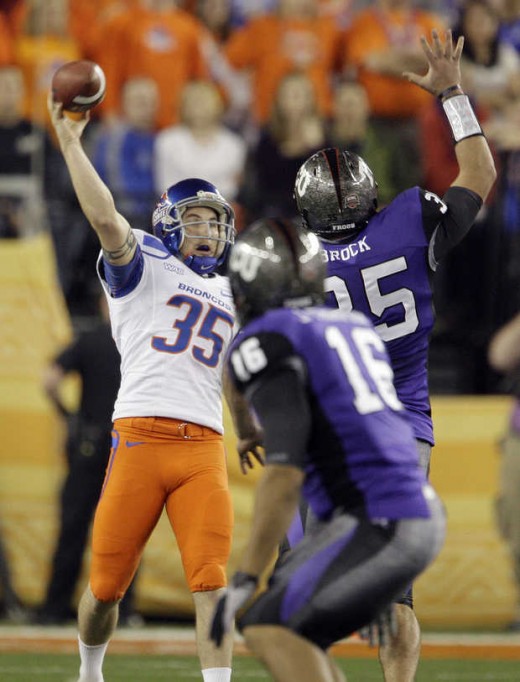 If a picture is worth 1,000 words, those three images — the last one being the fake punt that snookered Gary Patterson and TCU in the 2010 Fiesta Bowl — offer at least 3,000 words. They seem to carry even more weight than that. Very simply, Boise State’s twin wins in the Desert Southwest showed the college football community that when given the big stage, the Broncos have made the most of their opportunities.

This time around, the Broncos’ diminished resume — relative to the best teams of the Petersen era — paradoxically lowers expectations for them. However, those decreased expectations mean that if they lose, they’re not going to be viewed negatively. The 2007 and 2010 Fiesta Bowls were much more substantial “prove you belong with the big boys” moments. This is a game in which the Broncos are hoping for the best, but will not be torn up if they fail. They’ve established themselves under Bryan Harsin and should feel good about their future, all while regional neighbors BYU and Utah wonder what the heck is going on at their programs, awash in controversy, rumor and panic.

For Arizona, though, this game means a lot more. It’s the kind of matchup the Wildcats can’t afford to lose. In order to affirm that point, compare Boise State to the team the Wildcats played in their most recent Fiesta Bowl appearance.

The 2014 Arizona team is one of the four best in school history since the start of the Pac-10 era in 1978. Another one of the U of A’s best teams took the field in the 1994 Fiesta Bowl against the Miami Hurricanes and head coach Dennis Erickson, a man who later won a Fiesta Bowl at Oregon State and (in the eyes of many) deserved to make a BCS bowl appearance with Arizona State in the 2007 season. Had Arizona lost that game, the program would have absorbed the sting of severe disappointment, but few national observers would have looked down on the program for losing to The U. 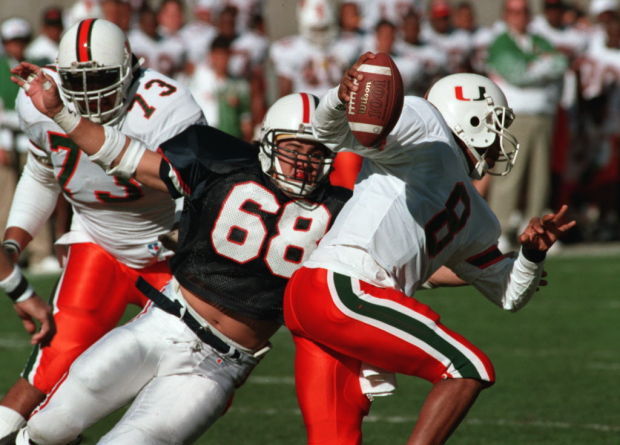 Arizona’s shutout of Miami in the 1994 Fiesta Bowl is quite possibly the best moment in the program’s history. This is why a win over Boise State — a program with less national historical cachet — cannot top the ’94 Fiesta Bowl as an achievement. The importance of this game lies more in Arizona’s ability to not lose; a defeat would take away some of the luster from a forward-moving season in Tucson.

In January of 1994, losing to Miami did not carry a black mark, even though that Hurricane team was hardly one of the better ones of the Erickson era. While Boise State has certainly earned a deserved place at the college football banquet table, the 2014 Broncos will never compare favorably to the 1993 Hurricanes in terms of national stature in a present-moment context. Arizona won’t experience a profoundly positive transformation if it wins — winning when expected to do so is not typically transformational. (Winning after trailing by 24 points could be, but in general, it’s not likely.) Losing, on the other hand, could allow the Wildcats and head coach Rich Rodriguez to think that in the 2015 offseason, something was left unattained in 2014.

The Fiesta Bowl is a place of warm memories for both Arizona and Boise State. Yet, while the Wildcats and Broncos both have much to be happy about, the favorite from the Pac-12 faces the fierce urgency of now, while the underdogs from the Mountain West have nothing to fear at all. How will a meeting between two infrquent New Year’s Six programs unfold? That’s the most enticing question about Wednesday’s duel in the desert.