Last week, the arrival of the first true “morning after” of the college football season — also known as Sunday — brought forth this piece on re-evaluating various teams after one game.  There’s a unique quality to assessing teams after just one game. This Sunday, the addition of merely one more game creates a substantially different feel within the course of the season. What you’re seeing now isn’t isolated to one day or moment; you, as a fan and a viewer, are getting to see how teams progress (or regress, as the case may be) from week to week.

Therefore, what was the “week-one measurement test” last Sunday now becomes a new Sunday item you’ll see for the remainder of the season here at The Student Section. We’re going to call it “First Number-Second Number,” with a nod to The Price Is Right and its pricing-game construct. As you can see in the image provided above, you need to correctly guess that the first or second number is part of the price of an item in order to earn a Plinko chip. This basic question — “Is the first number or the second number the more accurate part?” — is so much a part of the guessing game that is college football during the course of the season. In early September, these guesses are based on less accumulated information, so they’re more likely to be wrong. Even in mid-November, though, you will find that a number of teams are still mysteries. (Consider the examples of Baylor, UCF and Oklahoma from last season — those teams continued to throw curveballs through their bowl games, for better or worse.)

Play your favorite Price Is Right musical theme, and away we go with the opening edition of First Number-Second Number, here at TPIR… I mean, TSS: 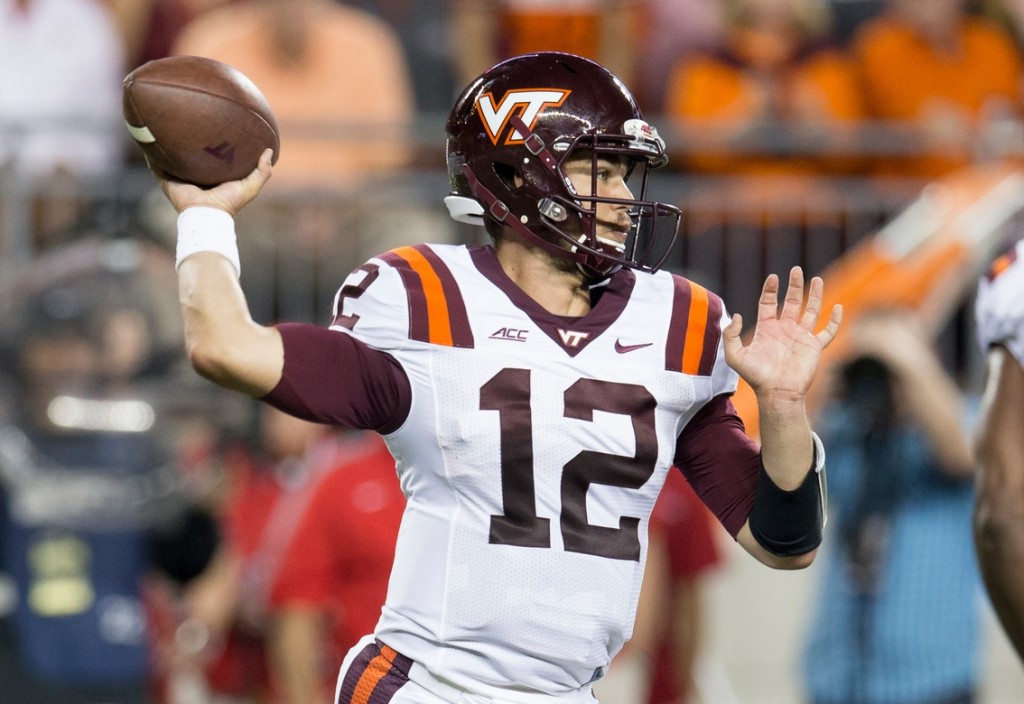 Michael Brewer made plenty of mistakes on Saturday night against Ohio State, but when the moment mattered most, he gave Virginia Tech, Frank Beamer, and Scot Loeffler a dose of much-needed leadership.

Not yet sure how this game works, contestants? It will become apparent very quickly.

Okay, look at the audience and spot your friends, that’s fine. It’s ultimately your decision. What would you say?

All in all, your friends would be right to say that not having Braxton Miller mattered more, if only because J.T. Barrett threw three interceptions, something Miller probably wouldn’t have done. However, within this larger reality, it’s also quite true that Virginia Tech:

A) played far better than most college football observers were prepared to expect;

B) looked coherent and crisp on offense, giving offensive coordinator Scot Loeffler a massive boost and the much-deserved right to earn some breathing room from his critics (one of them being the author of this piece);

C) dismantled Ohio State’s offensive line, forcing Barrett to run for his life for most of the night;

and perhaps most importantly,

D) was in huge trouble at 21-all in the fourth quarter, only for quarterback Michael Brewer to author the kind of drive that great leaders produce for their teams in moments of urgency.

The Hokies answered the bell in so many ways and have stamped themselves as the favorite in the ACC Coastal after two weeks. Virginia Tech deserves loads of credit and should rightly feel that it has changed the way it should be viewed in early September.

Yet, even with all of this being true, this is still a game that Braxton Miller would have, could have, changed. You probably didn’t feel Ohio State would feel this kind of sting this early in the season, but you had to be ready to expect a no-Braxton loss to emerge at some point, and likely more than once. 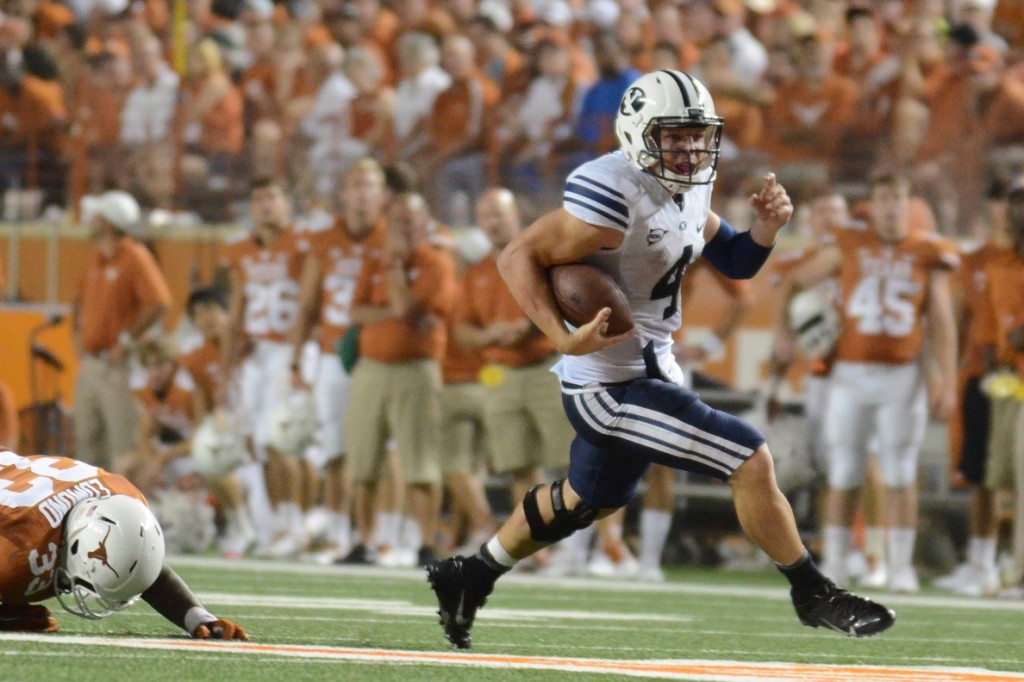 BYU didn’t have to score 41 or even 21 points to beat Texas, but the fact that Taysom Hill led his offense to a strong second half against the Longhorns bodes well for BYU the rest of the way in 2014.

Texas didn’t have its starting quarterback or its starting center against BYU. David Ash and Dominic Espinosa were missed as much as you probably thought they would be.

Yet, did you expect BYU to stroll into an enemy lair and hang a 34-point whipping on Bevo’s Boys?

For a half, this game looked very familiar to BYU fans. It was the “show promise on the road and have one side of the ball play well, only for the other side to slip up and enable the Cougars to play just well enough to lose by a point or two in the final minute DAMMIT COLLEGE FOOTBALL IS STUPID AND I HATE IT!” kind of loss.

You probably know that kind of loss. Those of us who now chronicle the sport have been there as fans before we had to mute our cheering during game action.

In the second half, though, BYU put 35 points on the board, as Taysom Hill shrugged off the first half’s failures and focused on the matter at hand. BYU now has a legitimate opportunity to go 12-0. The Cougars might have been helped by Texas’s injury situation, but a 34-point win means that in this pricing game, their number is more accurate than the Longhorns’ number. 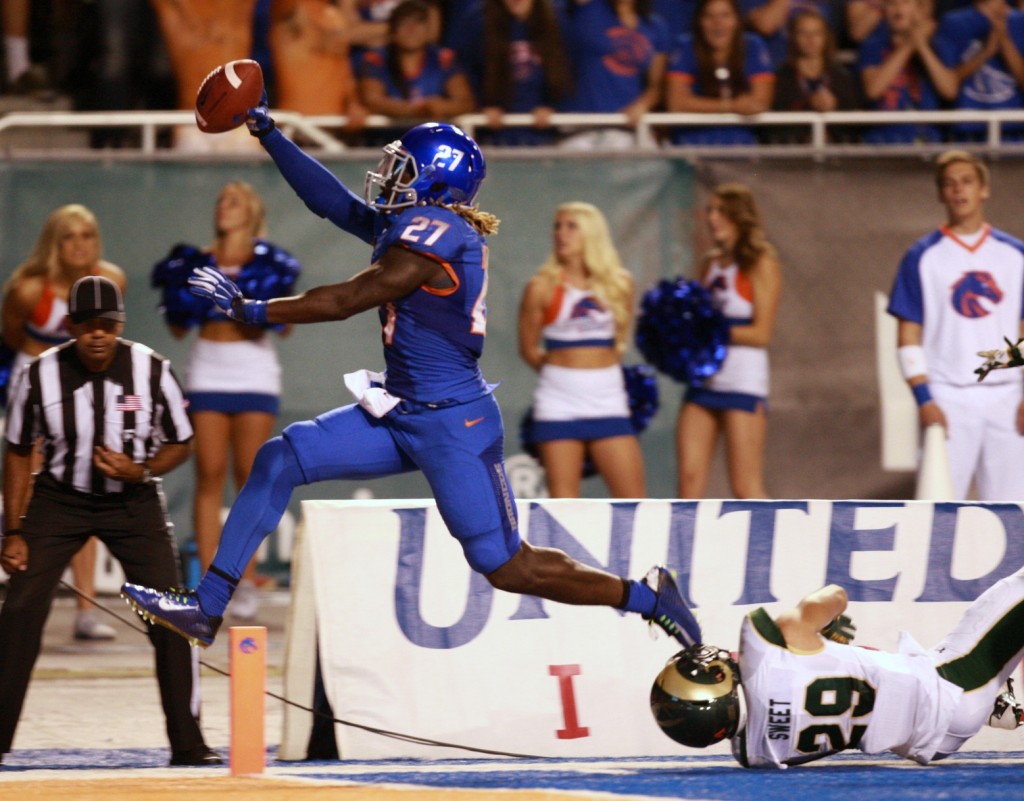 Boise State’s Jay Ajayi enjoyed himself on Saturday night against Mountain West Mountain Division competitor Colorado State. The Broncos look like the best team in the Mountain West by a considerable margin after only two weeks.

Colorado State visited the land of smurf turf with a great deal of optimism on Saturday night. Soaring and singing a happy song after taking down in-state rival Colorado, the Rams traveled to Idaho to face Boise State in a major Mountain West matchup. At stake was the right to claim the upper hand in the divisional race, combined with the ability to set up a possible division-deciding game with Utah State later in the season.

Perhaps one could say that Colorado State was overrated, and that this result was more about the first number — the Rams just not being very good. However, Boise State’s 35-13 loss to Ole Miss was, purely in terms of point spread, one of the more deceptive outcomes from week one. Boise State’s defense played hard, well, and with noticeable physical prowess for most of that contest. The Broncos just needed to clean up their offense a little bit against non-SEC opponents, and they stood to be in good shape.

Quarterback Grant Hedrick committed only one turnover, the same number of turnovers the Boise State offense committed as a whole. After piling up 676 yards against Colorado State, it’s fairly clear that the Broncos flexed their muscles. This was about their “second number” and their ability to flourish, not Colorado State being somehow overrated. 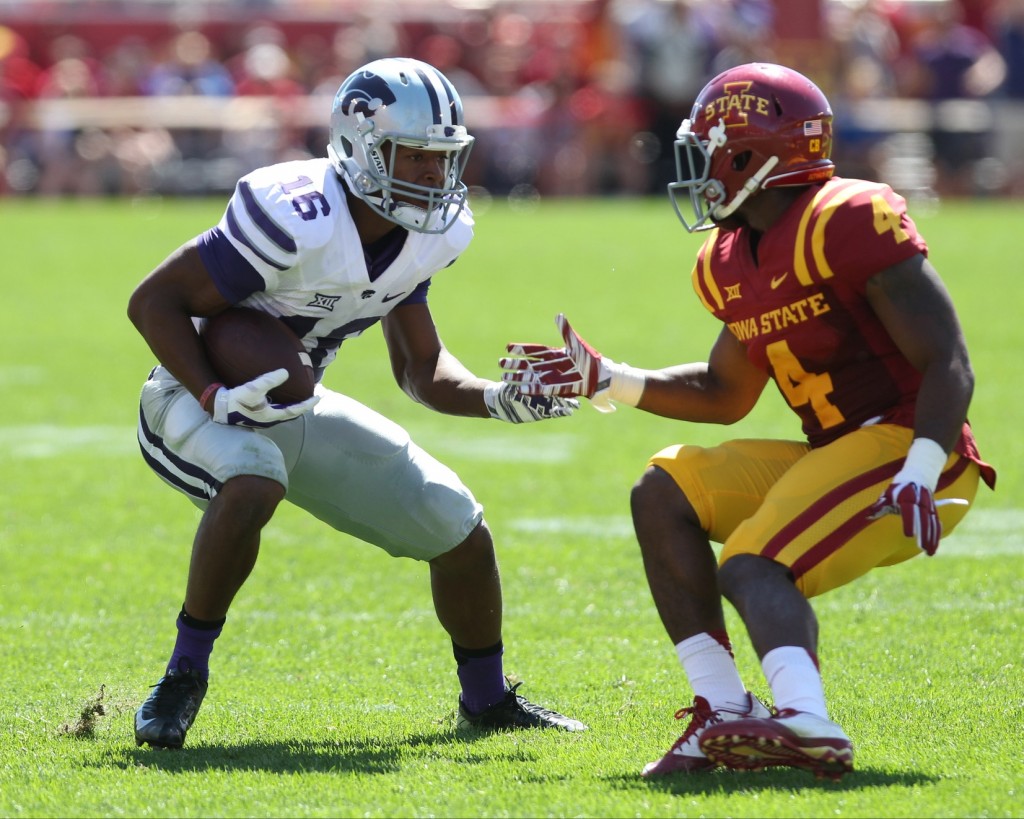 Kansas State and Iowa State met on very even terms this past Saturday. The hard part is determining how much this result will (or won’t) flow into Kansas State’s big Thursday night home game against Auburn later this month.

This (pricing) game is probably the toughest one to call, because college sports — defined by volatility as they are — offer plenty of examples in which a team will drift through an early-season road game, knowing that a huge home game lurks just around the corner.

Did Kansas State look ahead to Auburn, even though that game isn’t until Sept. 18, or did Iowa State just play better for most of the afternoon in Ames?

Perhaps the fairest way to answer this question is to split the answer in half… and ultimately make a decision in the end. On one hand, Iowa State just looked faster for much of the day, while Kansas State didn’t respond with the same instant energy or verve the Cyclones brought to the dance. We see this at least once every year: Paul Rhoads gets his players to produce a max-out effort against a better opponent in the Big 12.

On the other hand, Kansas State’s offense — say what you want about its 471 total yards, a deceptive statistic — was sluggish. Moreover, it needed a couple of momentum-changing plays that, on replay, didn’t actually seem to be called correctly. (More on that later this week in our “The Week In Officiating” series, which debuted last Wednesday.) Kansas State can play so much better than it did, leading this Price Is Right expert to conclude that the Wildcats are going to play a lot better against Auburn. This felt like a game in which Kansas State held something back… not intentionally, mind you, but genuinely.

The final decision, though? One has to be fair to Iowa State (especially since Big 12 replay booths never seem to be) and say that this game was more determined by the Cyclones’ effort than Kansas State’s comparative lack of vigor. 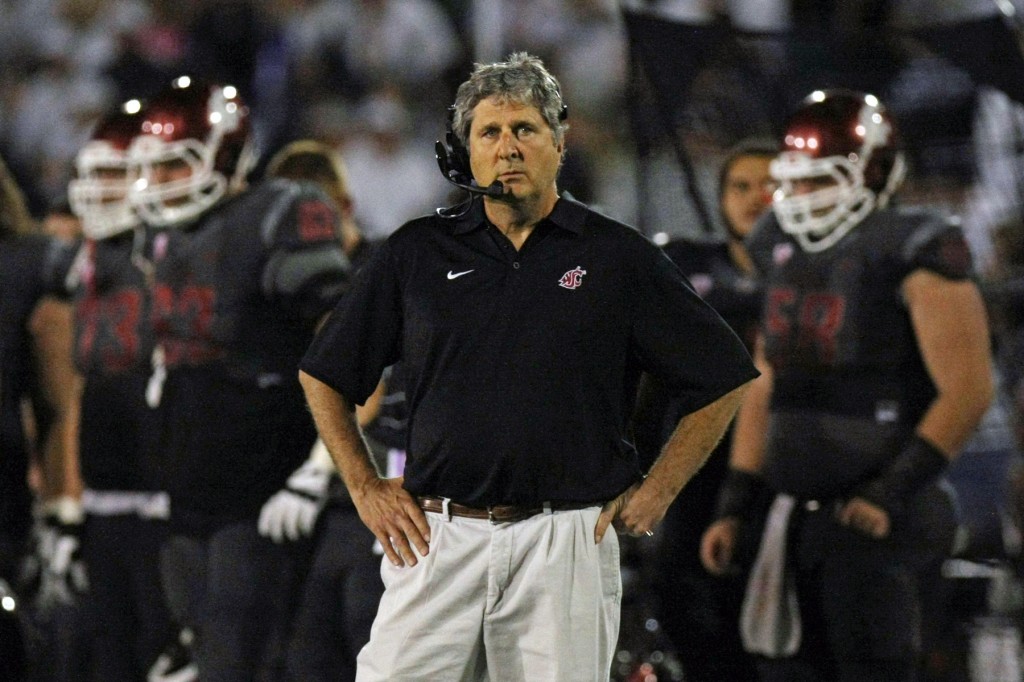 That photo of Mike Leach from Friday night says it all.

Sure, Washington State quarterback Connor Halliday threw for 389 yards, but when 389 passing yards lead to only 13 points… largely because they’re accompanied by only 38 rushing yards… what kind of a team does Leach have on his hands? Halliday, as a seasoned veteran, was supposed to make this offense better than ever. Leach certainly can’t use the excuse that Wazzu is just beginning to get used to his system. This is his third season in Pullman.

Let’s give credit to Nevada and coach Brian Polian for putting together a terrific defensive effort marked by a lot of backbone. The Wolf Pack should rightly feel proud about what it has accomplished, and if team members want to flip the bird at commentators who think this was much more about Washington State being bad (first number) than Nevada being good (second number), they’re well within their rights to do so.

Yet, let it be known: Yes, this was more about Wazzu than Nevada.

We’ll see you next Sunday morning for First Number-Second Number, carrying this game show through the remainder of the regular season.