Today is the last day of September. How are certain teams doing after a weekend that didn’t provide a lot of upsets… but didn’t involve smooth and straightforward performances by a number of ranked teams? It’s worth checking in on a number of teams whose journeys through September were anything but peaceful. Florida State leads the list.

I don’t get the consternation about Florida State right now. How does the Coaches’ Poll justify dropping a team that went on the road in the conference in a place they historically struggle and get a double digit win? For one that didn’t even play? Man, I’m glad polls like those don’t count anymore.

They have pelts from Oklahoma State, Clemson, and North Carolina State on the wall, only one of which happened at the friendly confines of the Doak, and that one was with a backup quarterback.

The biggest concern FSU should have revolves around getting everyone’s best shot every week. For teams like the Wolfpack, that’s their championship game of 2014. It won’t change. The hardest thing about winning a championship is often trying to defend it.

At some point, FSU won’t be able to start slowly; leave teams hanging around; or find its stride late and end up in the win column. It’s more upstairs than anything … digging deep weekly and finding that motivation to take everyone’s best blow, but that’s the chief problem. The Seminoles are more talented than anyone they’ll play. Keeping it sound above the neck is the biggest challenge Jimbo Fisher faces. 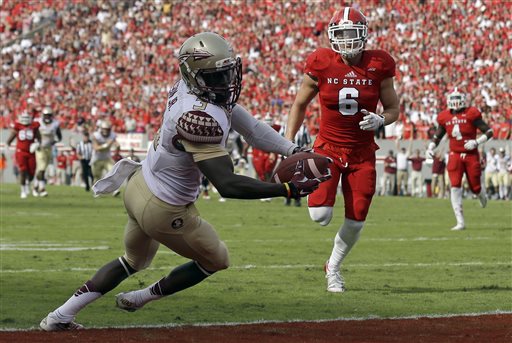 Florida State definitely gathered itself on Saturday in a place — Raleigh, N.C. — where it had struggled in the past. The Seminoles’ resolve is admirable, but this team will have to be sharper if it’s going to successfully absorb all the attrition it has had to deal with on defense.

There are so many pieces of the puzzle to account for when Florida State is discussed. Jameis Winston being suspended, as opposed to being injured, is a distinction which should matter in an evaluation of the Seminoles’ win over Clemson alone (not any other game). Winston being sloppy in some of the games he has played should also be noted. Florida State’s offensive line, independent of the quarterback situation, has been wobbly at times. Safety play has been spotty as well.

Yet, the biggest thing to note about Florida State is that its defensive front has been ravaged by injuries. The extent to which Florida State can regain a measure of health up front should shape the evolving conversation surrounding this team as it moves forward. Naturally, if the Seminoles win all their games, they’ll make this conversation a moot point. It’s if Florida State loses once — and falls into a cluster of one-loss teams, two of them from the SEC West, let’s say — that this debate will become more complicated.

We’ll cross that bridge if we ever get to it. Injuries, though, are what I’m going to be mindful of more than anything else as I continue to follow Florida State’s progress in 2014.