Student Section staffer Kevin Causey, who updates our quick-hit visual posting hub, The Locker, every Saturday, writes a story for us every week called “Flashback Friday.” In his most recent installment of Flashback Friday, Mr. Causey wrote about the Florida-Georgia series. You’ll note that one of the games highlighted was the 2002 edition of Gators-Dawgs, in which Georgia was supposed to lay a beatdown on Florida… but somehow fooled around long enough to lose and miss a shot at the national title.

Entering this Cocktail Party, 12 years later, many were talking about Georgia’s ability to play itself into the College Football Playoff by winning out. Technically and narrowly, that was true, but what lingered in the background was that the Bulldogs were feasting on bad SEC East teams, plus SEC West cellar-dweller Arkansas. Georgia needed to prove it could beat a good team (Auburn) in order to affirm its legitimacy.

Little did anyone else know that the Bulldogs also had to avoid losing to a bad team in November.

That’s what they did on Saturday.

Unlike 2002, the outcome wasn’t in doubt in the final 10 minutes of the fourth quarter.

By all means, give credit to Florida and head coach Will Muschamp. A team and a coaching staff on the mat (not just on the ropes, but sent to the floor after enduring some roundhouse punches) was able to pick itself up and play with force and a focused intensity that had been missing throughout the season. Florida played better, coached better, caught better, and hit better. It was comprehensively superior and created an immensely satisfying memory in a generally rough autumn.

Yet, from a national perspective, there can be no doubt that the main story was and is — and should be — the utter collapse of the Georgia Bulldogs. Notions of a spot in the College Football Playoff have been shattered. Hopes of being one of the SEC’s four or five best teams have been put to bed. Georgia clearly does not meet those standards.

What’s going to hurt almost as much as the loss itself is how cowardly the Bulldogs and their (still very accomplished) head coach proved to be in the first half of this contest.

If you wanted to identify a turning point in this game, you could have selected the missed field goal by Georgia’s Marshall Morgan with UGA leading, 7-0, in the first quarter. However, before that miss, Georgia offensive coordinator Mike Bobo — who figured prominently in the team’s other SEC East loss (to South Carolina) — intervened with hugely negative results for the Dawgs.

Georgia had been blasting Florida’s front seven off the line of scrimmage. Deep in Florida territory, the Dawgs encountered a second and four, a tailor-made running down. Nick Chubb had been feasting at the Cocktail Party table against Florida. Bobo just needed to get out of the way and feed him some more. Instead, Bobo inexplicably called two passes, both of which failed. Then came the missed field goal.

Georgia was not the same team after that. 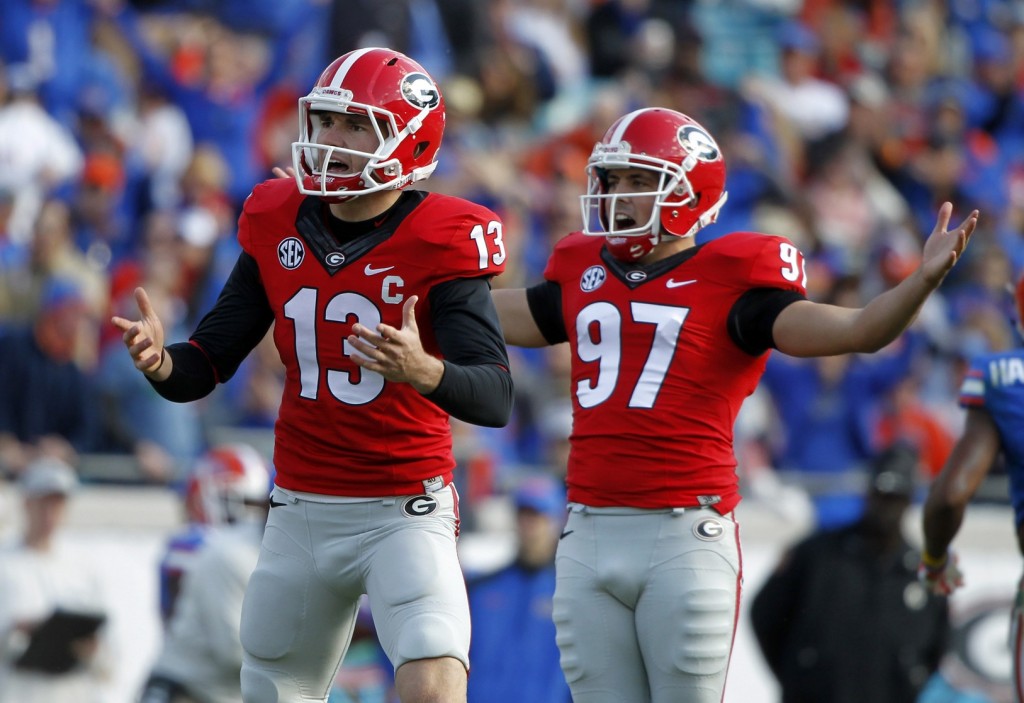 This missed field goal by Georgia’s Marshall Morgan began a long slide for UGA, known in yoga parlance as “downward Dawg,” but before that miss, Georgia offensive coordinator Mike Bobo made the play calls which fundamentally changed the trajectory of the Cocktail Party.

Florida and Muschamp sensed the change in energy. On fourth and long, the Gators lined up to kick a field goal in the second quarter, still down 7-0. Georgia had to know that Florida’s offense was going to find it hard to score under the current prevailing game conditions. Playing the fake was the sensible play, especially with a nasty wind in play (the same one that caused Morgan’s kick to miss in the first quarter). Yet, Georgia was snookered, and Florida promptly found the momentum-sustaining, scoreboard-changing play it needed:

Muschamp fakes the field goal to tie up the game at 7. https://t.co/NQ8TT43yNA

One more moment before the half showed how out of it the Georgia coaches were… and how that carried over to the Bulldogs’ players. In the final 90 seconds of the half, Mark Richt allowed roughly 20 seconds to elapse from the scoreboard clock when he had timeouts left, failing to give his team the best possible chance to score before the break, trailing 14-7. Whether Richt was or wasn’t intentionally showing a lack of trust in quarterback Hutson Mason — especially on a day when Todd Gurley was sitting out — is beside the point. Regardless of what Richt intended to do, Florida sensed weakness in Georgia’s quarterback, Georgia’s offense, everything about the Bulldogs.

As a result, Florida was able to play a simple game in the second half, running the ball and daring Georgia’s defense to stop it. The Bulldogs couldn’t, because they didn’t believe in what they were doing. Florida believed in itself and its coach, as improbable as that might have sounded before kickoff. The Gators proceeded to run away with this game, not only knocking Georgia out of College Football Playoff contention, but out of first place in the SEC East. It’s Missouri’s division to lose at the moment.

Georgia lost more than a game, a chance to make the playoff, and a division lead on Saturday. The Bulldogs lost the confidence they had built over the past month.

How will Georgia respond later in November against Auburn and Georgia Tech? The answer to that question will shape how the 2014 Bulldogs are remembered.