For a year and a half, Auburn has been the cute brunette in a spaghetti strap top and denim skirt in the horror movies that you know from scene one is somehow going to make it, then spends the next 90 minutes being captured, left for dead, hit by any number of vehicles, and somehow emerges bloody and defiant to upend whatever 6’7″ menace awaits.

The pretty blonde rarely, if ever, survives instead of the brunette.

Saturday in Starkville, the brunette was finally caught by the guy with the chainsaw.

It was a defining win for #HailState (as catchy of a school hash tag as exists) and Dan Mullen buried his face and pink visor into an assistant’s wet jacket after yet another defining win in three weeks full of them for the suddenly CFB Playoff front-running Bulldogs.

For the third straight week, MSU shot out of the cannon on fire, building a 21-0 lead before you could catch your breath. If Auburn had to cut off one huge benefit the Bulldogs had enjoyed against LSU and then Texas A&M last week, it had to be letting MSU build a massive lead.

Buoyed by two turnovers and unloading a clip into its feet, Auburn was unable to do just that.

But what made the game so fascinating is that MSU was content reloading the chamber and pumping a few shells into its own feet, and after 21-0, it looked like two teams desperately trying to not win.

A fortuitous (for Auburn) fake punt call by MSU gave Auburn life. It was a dumb(founding) call considering Auburn looked like they were in protect against the fake mode and, you know, MSU was up by 21 in their own territory. Red Zone Auburn looked asleep at the wheel though, first with a missed field goal, then with a made one, and MSU had to come away thinking “wow, this could really be 21-14, but it’s 21-3.”

MSU wasn’t content though. Dak Prescott slung a pick in the end zone and Auburn was back in business. All the Tigers needed to do was keep it close enough, because it’s Auburn, and the Robert Horry of college football surely had a few more back breaking arrows in the quiver.

The rain came down hard, like a monsoon, with Mississippi State cheerleaders on television pulling off fake eyelashes because they were ruined, with Dak Prescott one ark built away from securing the Heisman trophy right there.

Auburn wouldn’t go away. If the second half was a country song, it’d be Eric Church’s track “Creepin.” Under 10 minutes left, Prescott sailed a pass into the end zone in single coverage again that very well could have been picked. It wasn’t. But State settled for the field goal and Auburn was in business to be Auburn.

Then, the kickoff, which will live in MSU lore and would effectively end Auburn, who spent so much of the day bumping it’s toes on every bit of furniture in the house painfully.

And it was a fumble. Suddenly, touchdown MSU, and that’s all she wrote. More cowbell, please. 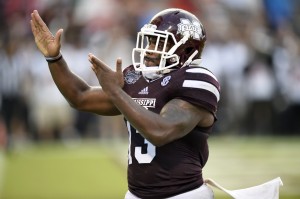 Mississippi State’s Josh Robinson led a bullish Bulldog effort on the ground that always found a way to keep Auburn a step and at least a score behind. In the process, MSU took pole position in the SEC for a playoff spot.

Ironically, it was a Ricardo Lewis fumble … he of the amazing game-winning catch against Georgia last year that will forever live in Auburn and college football lore.

If there is a redeeming quality about these Bulldogs, it’s not fate. It’s not Prescott. It’s not a punishing running game. It’s sack and mental toughness.

When Auburn got within 21-13 and you could smell the wheels coming off a bit as they had consistently as if it was some sort of karma for that truly terrible fake punt call, Prescott marched the team down the field and punched it in with a 15-yard scamper to easy tensions, 28-13.

Josh Robinson was the Man-Thing all day, 98 yards on the day in a stout effort for the MSU offensive line.

In the end, MSU doesn’t necessarily look like Auburn … a team that just finds ways to win. They look like a team that isn’t perfect, but is damn good, and they know it.

It wasn’t a pretty affair by any stretch. There was bad play calling, piss poor and untimely turnover plays, and if it was anything but the 150 proof SEC West, would have been a game where we come away wondering just how good both teams are.

All of that doesn’t matter. They’re both excellent, but these are college athletes, not professional, and brain farts happen in every region of the country.

They’ll ring the cowbells deep into the night, soggy, but elated. In this horror movie classic, the pretty blonde survives instead.

The brunette didn’t make it this time.