The SEC West’s quality is something that has to be consistently monitored and re-evaluated over the course of the season. As associate editor Terry Johnson notes in his remarks below, there’s a lot more season left to play. It could be that in late November, the SEC West’s bottom four teams will be flexing their muscles, making this the “uber-division” many people (reasonably, one might add) thought it was in the process of becoming a few weeks ago. However, our panel is unanimous in noting that LSU and Texas A&M do not deserve to be seen as top-tier teams. The SEC West isn’t a seven-team paradise island of brilliance. It has the mighty Mississippi schools, Auburn, and Alabama… and then those other three schools, more or less.

Things can change, but right now, this is not a seven-team dream division.

Oh, and about that gleaming “26-0 against non-SEC West teams” statistic you’ve seen 6,749 times over the past 48 hours? We’ll talk about that as well.

Point-blank: Is the SEC West overrated? 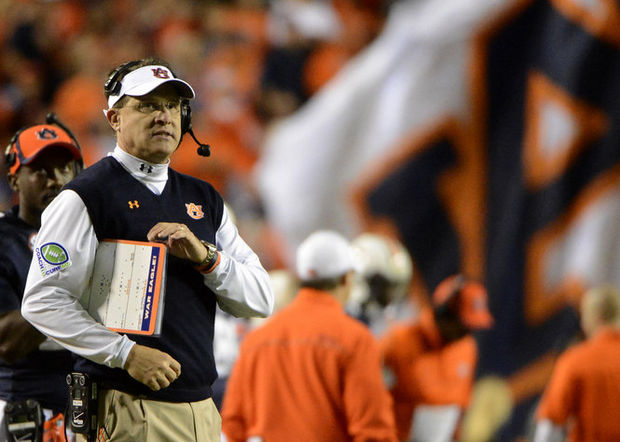 How Gus Malzahn and his Auburn team respond to Saturday’s loss will have a lot to say about the way the SEC West is remembered — and evaluated — when the 2014 season runs its course.

That depends on the metric we’re using.

If we’re asking, “Is the SEC West is the best division in college football right now?”, the answer is probably yes. Sure, the list mentioned above looks underwhelming at first glance, but of the opponents on that list, the only other conference that’s gone undefeated against them all is the Pac-12, which is a perfect 1-0.

Yet, that record doesn’t exactly mean that the division is untouchable like many “pundits” in the media are saying, either. While a perfect record outside of the division is no small accomplishment, it’s not always an accurate indicator of what’s going to happen on the field. Remember, the SEC has lost four of the last five Sugar Bowls it has played in, including decisive losses to Utah, Louisville and Oklahoma.

As an aside, spare me the “Well, we had nothing to play for” argument… anyone who’s talked Nick Saban, Bobby Petrino, or Will Muschamp for even five minutes would know that there’s no such thing as a meaningless game.

Now, if we’re asking, “Is the SEC West the toughest division in college football history?”, I’d have to answer “no” at this point in the season. That distinction belongs to the 1971 Big 8, which finished 1-2-3 in the final poll, and recorded seven wins against ranked opponents from other conferences. Included in that total was a decisive 38-6 win over then-No.2 Alabama in the Orange Bowl (Nebraska) and an 18-point victory over then-No. 5 Auburn in the Sugar Bowl (Oklahoma).

With that said, I think it’s wise to adhere to the realization that we’re only halfway through the season — there’s still a lot that could happen. During that time the division could beat itself up or establish itself like the Big 8 did above.

One thing is for certain: it’ll be a lot of fun to watch it unfold.

The “SEC West is 26-0 against teams not in the SEC West” stat is sexy. It should be mentioned. It deserves to be mentioned. Let’s not deny it.

The real issue is this: How much value exists in that statistic? Let’s put the list of teams front and center:

Just saw that the SEC West is 26-0 against teams outside of the SEC West. Here are those 26 teams. pic.twitter.com/qHOTQDxNhC

If you look at the non-SEC teams on that list, only a few — Kansas State, Wisconsin, Boise State — are noteworthy names in the sport, and of the three, only Kansas State gives the appearance of being particularly good at this point in the season.

This is one of the central tension points in college football, one that has existed as long as polls have been an issue in the sport: Some people will say that wins are what matters… and they’re not entirely wrong. Some will say that the quality of wins should matter more — they’re more correct, but at a certain point, it is true that winning trumps strength of schedule. A team has to win at a certain rate; if it loses three times against a tough slate, it’s hard to elevate that profile over the unbeaten power-conference team (I’m not talking about Marshall here) that goes unbeaten with a soft conference schedule. Think of Duke as an example, avoiding both Florida State and Clemson in the ACC.

The tension between wins-only and strength of schedule emerges more specifically when you’re comparing win differentials of one or two (not three or more), especially one. If you’re trying to differentiate among the 14 one-loss teams that occupy the 6-19 slots in both the coaches’ and writers’ polls, the wins-only component is obviously similar if not exact. The records don’t differentiate the teams. You need to go to strength of schedule. With respect to this discussion, then, you need to be able to determine if “They’re beating each other up in the SEC West!” is a reflection of very high quality across the board, or the coexistence of a few good teams with a few bad teams.

It should be fairly clear right now that LSU, Arkansas, and Texas A&M are highly flawed teams — not without their virtues, but not nearly consistent enough to be seen as especially intimidating or imposing. Ole Miss and Mississippi State are legitimate top-tier teams at this point in the season, but their victories have been one-way traffic exhibitions, for the most part. Auburn — better than the “others” in the SEC West — put up something of a fight, but Texas A&M was thrown around like a rag doll on its home turf by Ole Miss. The Rebels deserve to be elevated by that performance, but the Aggies deserve to be knocked several pegs in the eyes of any competent analyst. The absence of quality in the SEC East should also place that “26-0” stat in context as well. Had the 2013 SEC East been in existence this year, sure, the 26-0 number would look 200 times better.

If that number did look 200 times better, believe me when I tell you that I’d say so.

However, it isn’t 200 times better. It’s not even one ounce better… so I’m not going to say so… because I shouldn’t — not if I’m going to provide analysis that’s intellectually honest. 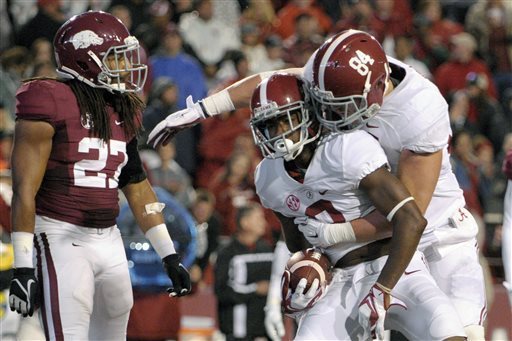 How will Alabama perform over the next several weeks, especially at home against Mississippi State and Auburn? That question will also influence how the SEC West is (and ought to be) remembered in 2014.

There was a point on Saturday night whilst I was watching a game where this diddy scrolled across the bottom, and I’m paraphrasing a bit, but the point is still the same: Mississippi State upends Auburn, notches third straight win over top 10 team.

That was on ESPN (predictably) and comes off looking nice, but is a bigger load than an infant’s diaper after a four hour road trip.

So, unfair as it may be, yes, the SEC West is overrated.

One of college football’s seminal issues in the BCS era was the annual perception of certain regions against any malleability in media reporting on the games, something the CFB Playoff will hopefully end.

While yes, the 26-0 aforementioned record is surely nothing to sniff at, it doesn’t suddenly mean there are four playoff teams from the division and everyone else is unfairly scheduling games to take away from what should be just an SEC West playoff.

That’s your issue. Are Mississippi State, Ole Miss, and Auburn real playoff threats? Yessir. Is Alabama if the Tide get a little better? Yessir. Is there a weak team in the division? No sir.

But is it overrated? Yes, because the media makes it so. Mississippi State hasn’t beaten three top 10 teams in a row. LSU was unraked two weeks after MSU defeated them. Texas A&M shouldn’t be ranked this week.

When Appalachian State defeated Michigan, Michigan was number 5. Does that mean every team from there on out that defeated Michigan beat a “top 5 team?” Early in the season, everyone is evolving and we know very little.

Overrated is a function of forced perception, and it’s no fault of the SEC West’s own teams. Idiotic media commentary has deemed it overrated, not the actual play in the division.