After the Mississippi State Bulldogs defeated a young and disorganized LSU squad two weeks ago, the discussion began in the SEC, especially its cutthroat West Division: Had Dan Mullen and his program arrived as a full-fledged force, or was the Bulldogs’ moment in Baton Rouge little more than a temporary surge aided by an opponent’s failings?

It could very well be that Texas A&M, like LSU, could be a team whose opening-week victory served as a misleading guide — not a true indicator — for the season to come. Yet, If you’ve followed Mississippi State football, you’re quite aware that stacking together huge victories has proved to be quite elusive for the program — not just under Mullen, but over the long march of time.

Mississippi State has written the same sad story so many times in its existence. The Bulldogs would build a measure of confidence and optimism by beating second-tier teams, but as soon as the heavyweights of the SEC came calling, Hail State couldn’t rise to a higher level. Mullen’s previous MSU teams were exposed by the Alabamas and LSUs of the conference. Auburn teams would slip through the Bulldogs’ fingers in winnable games that somehow got away. Five seasons — that’s half a decade, not just a quick two-year coffee stop — came and went in Starkville. Mississippi State teased but never reached 10 wins, not even once.

This program seemed consigned to the lower tier of the SEC West, never able to break through in a place that wouldn’t be readily identified as a recruiting hotbed. The imperfect coexistence of geographical and psychological factors had generally weighed down a coach and his players. Season five ended with Mississippi State barely even attaining the minimum standard needed for bowl eligibility.

Lots of coaches talk about how they’re ready to reach the next level, that a long-sought breakthrough can happen. Entering the 2014 season, Dan Mullen had reached what was in many ways the point of no return for him in Starkville. Either Dak Prescott was going to become the centerpiece of a genuine renaissance, or this program would continue to languish and dim Mullen’s coaching star, which had shone so brightly when he led Florida and Tim Tebow to a crystal football under the watch of Urban Meyer. As this season began, few programs faced more of an all-or-nothing reality than Mississippi State. Few coaches faced that same dynamic than Mullen did.

It is with this backdrop in mind that the Bulldogs’ thorough dismantling of Texas A&M can be allowed to be seen for what it was, and is… and ultimately can become. 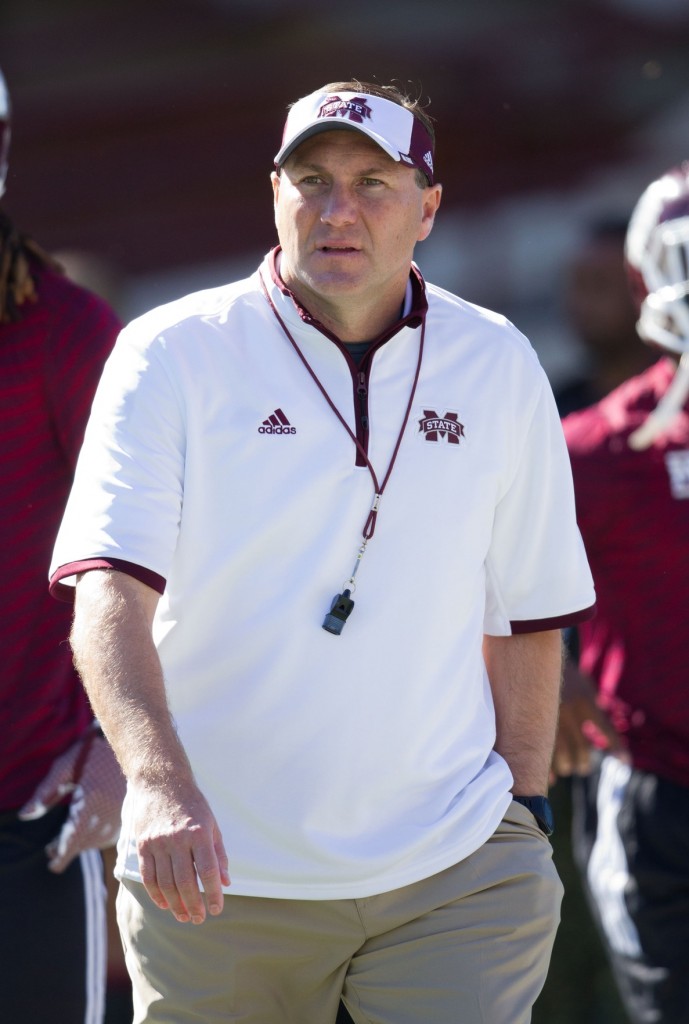 Through six weeks of the college football season, it’s very hard to refute the assertion that Dan Mullen has helped his career more than any other FBS coach.

Mississippi State did watch Texas A&M’s receivers kick the ball all over Davis Wade Stadium on Saturday. A&M, which seemed to be headed on a soaring, ascendant trajectory following its dismantling of South Carolina on Aug. 28, now looks like a thoroughly frail squad headed for a few more losses against other SEC West powers. Yet, look away from the Aggies’ weaknesses as you process this game in full. What you primarily saw in this contest was Mississippi State looking like the thoroughly better team, settling the dispute before the third quarter even came to an end.

Blocking. Tackling. Catching. Throwing. Pass rush. Strength in the middle of the line on both sides of the line of scrimmage. Mississippi State greatly exceeded A&M in all these areas. Kevin Sumlin might be seen as a coaching superstar, at least to the extent that he’s made a financial killing this year and beefed up his contract more than most of his peers, especially in relationship to his overall accomplishments (no SEC West titles or BCS bowl appearances). However, Mullen is now in position to at least contend for an SEC West crown.

Given that the SEC West is the epicenter of the college football universe at the moment, the mere opportunity to become the best team in the SEC — and thereby, a part of the first-ever College Football Playoff — shows how far Mississippi State has come in the first six weeks of the 2014 season. Dan Mullen has transformed his career to the point that his departure from Starkville might occur not because of a pink slip… but because brand-name schools might want to acquire his services.

Turnarounds have to be affirmed and validated with a full season of work, but through roughly half a season, no program has done more to point to a turnaround than the one which will likely host ESPN’s College GameDay broadcast next Saturday…