Usually at this time of the week, The Student Section puts forth a viewer’s guide for the coming college football Saturday, offering four to six games in the noon, 3:30, and 7 p.m. Eastern time windows, all ranked in terms of watchability. However, this week, there’s no need for that sort of guide. Unless you’re intent on watching your own team, your national choices have already been made for you.

You’re watching Baylor-Oklahoma in the noon window on Fox Sports 1.

You’re watching four other games as well, and there’s something about those four games which jumps off the page for anyone who follows the sports television industry.

TEAMS WANT ACCESS TO THE COLLEGE FOOTBALL PLAYOFF; AMERICANS WILL ENJOY A MAXIMUM LEVEL OF ACCESS TO MOST OF THIS WEEKEND’S BIGGEST GAMES

The other four huge games on Saturday — the ones that will dominate your viewing hours if you’re intent on watching the games with College Football Playoff relevance — stand out from the crowd.

In the 3:30 window, Notre Dame and Arizona State have no competition on ABC. That window belongs to the Fighting Irish and the Sun Devils.

It’s in the night window when viewers will need to wear out their remote controls if they have only one television set. At 7:40 Eastern, Kansas State and TCU play on FOX. At roughly 8:10, ABC and CBS will duel in prime time: Ohio State-Michigan State airs on ABC, while Alabama-LSU kicks off on Black Rock. 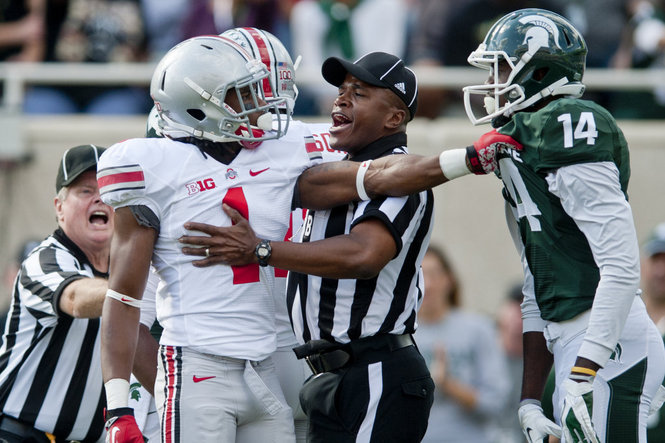 You will notice that those four games — a majority of the six contests involving two top-25 teams at this advanced stage of the season — are on network television.

Step back and realize what a precious moment this is: In an era of sports television when cable has taken over the BCS National Championship Game (this season, the College Football Playoff) and the bowls; when TBS has become a Major League Baseball playoff broadcaster and a Final Four broadcaster; and when the NBA conference finals are almost exclusively shown on cable (before the Finals go to ABC), we have become conditioned to expect that the most important non-NFL sports broadcasts on the calendar will mostly go to cable, certainly far more than any of us ever could have anticipated 20 years ago. 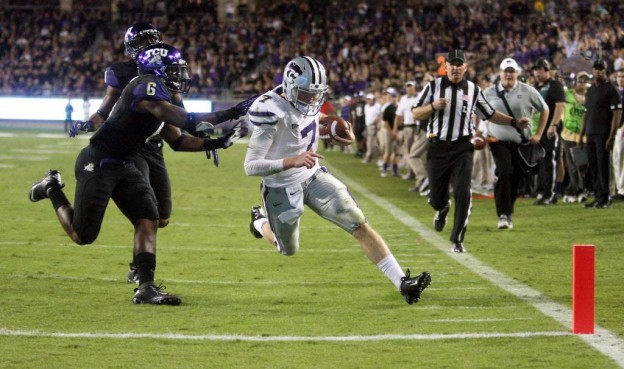 So does this one.

Cable has continued to occupy more and more territory in sports broadcasting. Even though televisions are plentiful and technology becomes ever more expansive, there’s still a reasonable chunk of the population which can’t afford cable or doesn’t want to eat a subscription to a full menu of channels, instead hoping for a la carte (at an affordable rate) in the future. The bundling of services and products; the proliferation of streaming options; and other emergent delivery systems are all beginning to get around cable television — this shift in broadcasting is already well underway. Nevertheless, for some Americans, it’s still television or nothing, so the presence of four big college football games on network airwaves comes as a welcome surprise… but a surprise indeed. 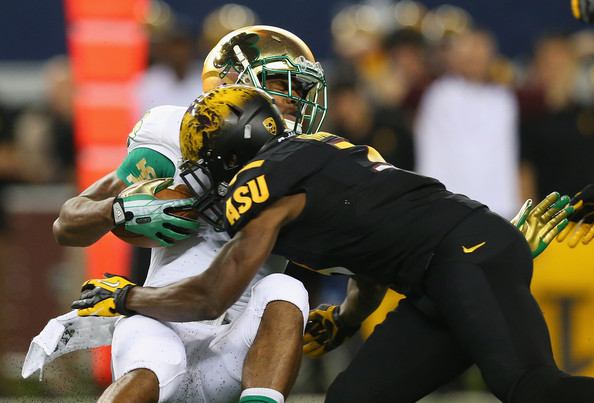 So does this one.

If you’re a college football fan, you’ve been excited about this Saturday’s schedule for months — you always knew Ohio State-Michigan State was going to be a big game, and you knew Baylor-Oklahoma was going to be good. You are relieved that LSU has become good enough to make its clash with Alabama interesting. However, who could have known that Kansas State-TCU was going to become such a big deal? Who could have known Notre Dame-Arizona State would figure so prominently in the national conversation? Who knew Oregon-Utah would become so compelling? 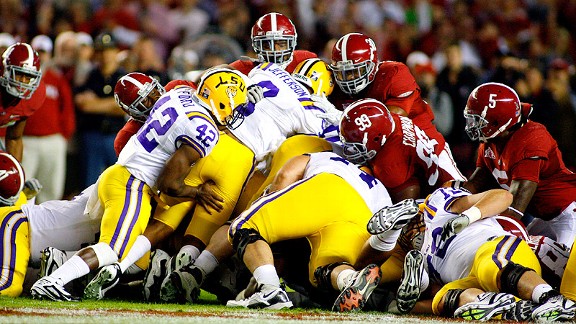 Six games comprise this Saturday’s schedule for viewers interested in the biggest national showcases. Four of these games are on network TV. If you always knew this schedule was going to be special but you thought that ESPN and Fox Sports 1 would dominate the lineup, guess again. If your budget is tight to the point that games aired on cable are hard for you to watch, this is your college football Saturday. This is your time to work that remote control at 8:10 Eastern, when you’ll have three huge games to follow on network TV, not just one. If you know friends who lack cable and find it difficult to watch the best games on Saturdays, invite them over. Throw a party.

Until conference championship Saturday on Dec. 6, you probably won’t find a better day to watch college football on network television this season.