The Student Section is pleased to announce the beginning of a collaborative relationship with Bloguin’s 10 school sites. You’ll get expert analysis from writers and editors who know specific teams extremely well and follow them closely every day of the year. By following Subway Domer and Noled Out, you’ll get a superabundant amount of insight into Saturday’s Irish-Seminole game.

IT’S FLORIDA STATE WEEK Y’ALL!!! Wake up people, because this is what makes the season great. Other things that make a great season… talking football with the enemy. Today we sit down with Mike Ferguson of NoledOut.com for the first of many more cross-posting roundtables with other Bloguin sites and Matt Zemek of Bloguin’s The Student Section. We’re getting excited to know one another, and you can catch my answers over at Noled Out and The Student Section along with a lot of other great content, so let’s dive right in…

Joshua Vowles, Subway Domer: I think most observers would say that this year’s Florida State team is not as good as the 2013 version. Is that a fair statement? What are some differences between last years team and this years team?

Mike Ferguson, NoledOut: From what we’ve seen from Florida State to this point in 2014, I think it’s more than fair to say the Seminoles are not as good as they were a season ago. Now, that doesn’t mean that Florida State won’t finish atop the final poll, but FSU is having to grind out victories whereas it just ran through the schedule last season.

There are a number of reasons for this. The injury bug stayed mostly dormant last season whereas it has become far too contagious this year.

On the defensive side of the ball, Florida State has lost a lot of leadership. Guys like Lamarcus Joyner, Telvin Smith and Christian Jones were vocal leaders last season. FSU also had fifth-year seniors as reserves like Jacobbi McDaniel, Dan Hicks and Demonte McAllister, who had all been through the rigors of a 7-6 season in 2009. Offensively, I think we all underestimated just how good Rimington Award-winning center Bryan Stork really was. 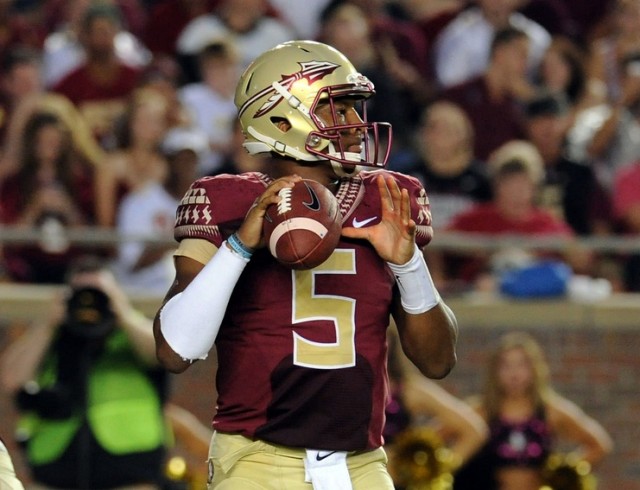 Josh: Jameis Winston seems unbothered by all of the noise surrounding him (and it’s quite a bit). What does this say about Winston? Is this a “mature” move from him as Jimbo Fisher stated, or does he not have the capacity to understand the gravity of the situation?

Mike: Figuring out Jameis Winston is never easy. It is remarkable how the distractions off the field have yet to affect his play on it. For Coach Fisher to call Winston mature however, may be a bit of a stretch considering the crab legs incident and the whole obscenity outside of the classroom thing that led to his suspension against Clemson.

To say that he doesn’t have the mental capacity however, is also a stretch. In 2013, Winston was named to the ACC’s All-Academic team and the kid is wise beyond his years as a decision maker on the football field. The best way to put it may be that Winston is an immature college student, but a very mature student athlete.

Josh: There is a severe lack of respect for Florida State throughout the country. For being undefeated, having the reigning Heisman winner, and being the returning national champions; Florida State is not ranked No. 1. What’s the deal? Given the same set of circumstances, would this happen to an Alabama or Notre Dame for that matter?

Mike: I think there’s clearly an argument to be made that Florida State does not deserve to be the No. 1 team in America, but the Seminoles’ victories seem far more scrutinized than other schools’ nail-biters. ESPN actually said that Florida State’s 43-3 win over Wake Forest went “down to the wire.”

Is it fair? Probably not, but it is what it is. While I don’t want to sound like a conspiracy theorist, the “omnipotent power” reputation that the SEC has received also magnifies the big wins from teams in that conference and downplays victories by others.

If Alabama were riding a 22-game winning streak, I don’t think we’d hear a peep about them being overrated. I think there were some of these rumblings about Notre Dame when the Irish completed a perfect season two years ago, so they’re not exempt from criticism as most SEC powers are.