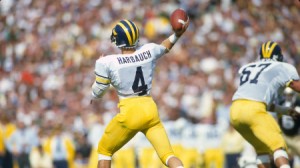 Can Jim Harbaugh be a success running the Michigan program he once played for? (Photo by Focus on Sport/Getty Images)

And while there is an old adage that says you can’t go home again, it happens a lot in college sports. As ESPN’s Tony Kornheiser often says, the allure or pull of alma mater is hard to resist.

Jim Harbaugh got on a plane Sunday night to go home. He will be introduced on Tuesday as the University of Michigan’s fourth head coach in the last ten years. He replaces the unsuccessful Brady Hoke, who replaced the very unsuccessful Rich Rodriguez.

Obviously, given the dearth of success for much of the last decade in Ann Arbor, it is only fitting that Harbaugh is getting something of a hero’s welcome back to Southeast Michigan. Yes, time does heal all wounds—even ones that probably should not have been felt in the first place.

But that’s neither here nor there. The larger question that seems to be going unsaid as Harbaugh took his valedictory lap on Sunday — and will probably not be spoken at the podium on Tuesday — is this:

What if this doesn’t work?

It seems unlikely, I guess, to even consider that possibility.

Remember, though, that it took Harbaugh four years to get the Stanford program built up to the point where it is today as a top of the conference team. In fact, Harbaugh’s Stanford Cardinal teams had losing records the first two years he was at the helm in what was, essentially, a watered down Pac-10 Conference. It was the final stretch of the USC dynasty and there was a bit of a vacuum left behind at the top of the league.

Granted, some might say that the 2007 upset of USC led to the beginning of the end for the Trojan dynasty and that a good coach will take advantage of an opportunity that was presented to him.

However, it is hard to deny that the top of the division Harbaugh is walking into is going to be a different animal than the Pac-10 was in 2007.

Penn State’s been paroled by the NCAA, and while the Nittany Lions are still in recovery mode, they have someone who has a track record as a great recruiter in James Franklin.

Michigan State lost defensive coordinator extraordinaire Pat Narduzzi to the Pitt Panthers, but Mark Dantonio has not left, and he has built up Michigan State significantly over time.

Oh, and unless he has another “episode,” Urban Meyer is still residing in Columbus, Ohio.

That doesn’t even factor in Randy Edsall continuing to improve Maryland as he gets to put more of an imprint on the workings in College Park or anything that Rutgers or Indiana might string together.

The row to hoe is going to be much harder than the path in Palo Alto was. Will the four year NFL sabbatical be a positive or a negative when it comes time to hit the road recruiting over the next five weeks in advance of signing day?

Yes, Harbaugh is not a newbie at this, and it might be safely assumed that the coaches Harbaugh can get to join him in Ann Arbor will have the chops necessary to handle the task ahead. Yes, the support behind the scenes should definitely be there in ways it was not under the prior sets of administrative leaders.

But if this gets off to a rocky start, or it takes more time than expected to start to turn things around, will the patience and love still be there?