Welcome to The Student Section, Bloguin’s college sports blog, a place where I and co-editors Terry Johnson and Bart Doan — all alumni of College Football News — will try to give you a mixture of smart commentary and a taste of fun.

That’s what most people want from college sports, anyway — an enjoyable experience, but something that can be made sense of from time to time. As you begin this journey with The Student Section, rest assured that you’re going to receive a fair share of entertaining tweets, GIFs, pictures, and other such delights at The Locker. Today, though, is an occasion for some sobriety, a time to come to grips with what college sports — college football in particular — has become.

It’s the same case every year, only with a greater sense of urgency and an increased awareness of the widening gulf between the carnival inside the stadium and the absurdities allowed to persist off the sporting green: When kickoff time arrives in late August, it’s time to celebrate a sport that resonates so deeply and personally with so many Americans. However, let’s not allow the specialness of college football to make us ignore the appalling realities that continuously creep into its environment.

Why take time to look at the flaws and concerns that hover over college football? If you’re a married person, you’ll get this: Lovers — faithful and wise lovers — find relational harmony and bliss not because they ignore or gloss over the failures in the other, but precisely because they’re able to live with the failures of the other. As Anna Draper told Don Draper in Mad Men, “I know everything about you, and I still love you.” That’s what it means to love a sport — to see its shortcomings and desire change, but to accept imperfections because there’s still so much beauty to be found in the incomplete product of the present moment.

Nick Saban said the following within the context of the pace-of-play discussion, but the question resonates in matters far removed from on-field tactics and strategies:

“I just think there’s got to be some sense of fairness in terms of asking is this what we want football to be?”

Indeed, Nick — when we look at the offseason that was (and is), we are reminded how special this sport must be to retain our trust and attention despite all the messy situations that try to ensnare it and drag it into the muck.

How can Oklahoma and Bob Stoops pursue Dorial Green-Beckham (shown above in the cover photo) in the first place? How can the receiver even be allowed to land at a top program after Missouri rightly booted him? Given that coaches receive incentives for winning conference and national championships and attaining all sorts of milestones, how can a rational person even begin to insist that college athletics — in the revenue-sport realm — are fundamentally guided by the wholesomely holistic (or holistically wholesome?) principles of amateurism?

How can Louisville — treated like dirt by a charter member of Pat Forde’s “Liar’s Club” — welcome Bobby Petrino back into its waiting arms? The answer is all too obvious: The Cardinals are now playing in the Atlantic Coast Conference and have too much pride and prestige, too much emotional and resource-based capital to lose. Tom Jurich pulled Louisville to a power conference, beating Cincinnati and especially Connecticut to the punch. Having done that, he had to make sure his football team could swim with the ACC’s sharks on Saturdays.

As is the case with many realms of human endeavor, once you start down the road of hardball tactics, it’s difficult — if not impossible — to stop playing for keeps. Doing whatever it takes to win, regardless of the cost to your dignity or integrity, becomes far easier than acting in accordance with the belief that victory isn’t worth any price. Winning and the revenues associated with it are paramount in college sports, so paramount that a second courtship with a supremely duplicitous figure is seen as the cost of doing business — no more and no less.

The man who sabotaged an athletic department and misused state resources is now the happy owner of a second chance at Louisville. That’s a fine educational message to send to student athletes, an all-too-typical part of the college sports world as we know it.

One of the great stories of the 2013 college football season was the way in which the UCF Knights (that’s how they like to be called — not Central Florida) climbed to the mountaintop of their conference and then claimed the Fiesta Bowl championship with a resounding triumph over Baylor. Able to come back from deficits (against Louisville) and endure tough situations (against Temple) with uncommon consistency, the Knights completed a journey from anonymity to national acclaim. The young men on the UCF roster deserve nothing but lavish praise. It should be the kind of story we can all look at and salute with unreserved happiness.

Yet, it’s hard to take that much joy in the UCF story. Why? Because the Knights’ head coach is still gainfully employed as a head coach, in spite of what he allowed to happen under his watch. George O’Leary should — at best — be toiling away as a position coach. At worst, he should be out of the sport. Yet, his quality as a coach — there’s no question he’s turned UCF into a championship program, after all — matters more than anything else under the sun, in Orlando and many other places as well.

UCF’s players, students, and fans — they should have every right to enjoy the feelings they’ve been able to absorb and revel in over the past several months. Seeing your school hit the limelight — and succeed between the painted lines in a national-television arena such as the Fiesta Bowl — merits a lavish and extended celebration. Their moment, their happiness, should not be diminished or taken away… yet, solely as far as George O’Leary is concerned, one can’t look at the UCF situation and regard it as “the way college football is supposed to be.” 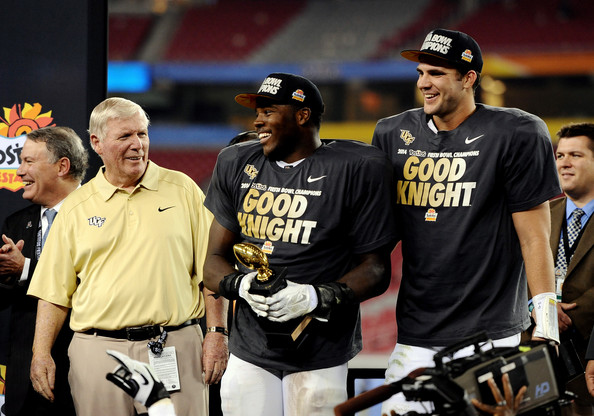 Neutral parties with an awareness of the history of UCF football were happy for the two black-shirted figures in this picture, taken right after the 2014 Fiesta Bowl against Baylor… but not the gold-shirted figure with white hair on the left.

It can be all too depressing to come face to face with the chasms that exist in college sports. Consider what was revealed at the University of Hawaii this past offseason.  Within the realm of college football but beyond the confines of the Football Bowl Subdivision, consider how wrenching it was to read about the conditions which pervaded the Grambling football program and its athletic facilities (if you can even call them that).

The balance of power and leverage — the ability to do what one wants, when one wants to do it, often just because it can — is so skewed in college sports that any depictions of the industry as a widely and consistently benevolent system just can’t hold water — not in light of all that’s happened at the O’Bannon trial and in the movement to give football players better workplace protections.

There’s plenty to say about all the ways in which college football and college sports make the human heart sing. You’re going to read about the sunshine. You’re going to have occasions to laugh and enjoy yourself before too long. However, at the beginning of your journey through the 2014 season — and your journey with us at The Student Section — it’s important to digest the fact that while college football remains worthy of love and affection, it retains some substantial flaws, the kinds of shortcomings that need to be recognized with a clear head if this love relationship is to endure.

“Is this what we want football to be?”

Nick Saban’s question — though meant for a different audience in a different context — sits uncomfortably in front of us all… starting with Bob Stoops, moving to Bobby Petrino, and flowing on down the line.