Brace yourselves, the worst weekend of college football 2014 is upon us. You’d like to give the games a pass and say that some of it is by circumstance … certain teams aren’t supposed to be as bad as they happen to be and so forth … but truthfully, this weekend never even got out of the shower to start the day.

The only game that finds ranked teams playing against one another happens to be UCLA at Arizona State, which happens to be on a Thursday with both preseason Heisman contending quarterbacks on the shelf watching their backups play.

After that, we’re treated to a heavy dose of “if Keystone Light was a college football Saturday, it’d be September 27, 2014.”

This is the great fear of the College Football Playoff era. Never mind timeless rivalries being ended and series being cancelled. Worry more about the lack of motivation that teams have early in the season when it comes to seeking out other elite level opponents. College football scheduling excitement news has been reduced to “oh, look who scheduled whom for 2024!”

Odds are, half of those games will never happen, and who knows who will be up and down in that time. When originally scheduled, Miami and Nebraska probably seemed like Appointment Television. When it happened last week, it was buried on ESPN2 in the face of Clemson-Florida State on ABC and Oklahoma-West Virginia on FOX.

Thankfully, conference season begins in earnest for just about everyone next week, and short of Mike Slive taking over all of college football, all the good teams can’t find a way to dodge all the other good ones forever.

The prime time evening game is Notre Dame at Syracuse, which has a chance of being good if the Orange play out of their gourds, but going in you’re not thinking you have to sit down and see every waking second of that one by any stretch unless you’re a member of either fan base.

This is typically the most underwhelming weekend of the season because teams that aren’t in conference play are looking to find one last pound of flesh to run over with before getting into the meat of the season: conference play. It makes total sense if you’re running a football program; it just stinks for the viewer … which … who cares, I suppose, in the grand scheme of things.

You would want this to not become the way these things are going to go from now on, though.

This is bad for the CFB Playoff committee, whose members are charged with “trying” to ignore the outside influence, focus on only the games, and use as much is available to them. This weekend offers very little that will end up being of use in all likelihood. 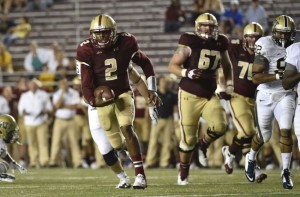 There will almost assuredly be another Boston College over USC this weekend, but with another underwhelming slate of games slated for this Saturday, how much is the CFB Playoff committee really learning these days?

There are two lines of thinking with all of this:

1. Having four teams eligible to play for the title means teams will be more likely and willing to take chances in scheduling to put bigger names from Power 5 conferences on the schedule, because one loss or even two in some cases might not be the death knell to your chances that it once was. Fattening the schedule with cupcakes and hoping you roll through conference season unbeaten to have played for the BCS title is a far less guaranteed route to go under the new system. Plus, the emphasis on conference championships means that you can lose one out of conference, win your conference, and still be shined favorably on.

2. Scheduling lousy and not taking chances means, basically, you just have to win the conference to get in. With conference titles holding assumed weight, so long as your conference has a ranked team or two in it, that’s your ticket, so why play other potential top 10 teams … God forbid on the road … and take heightened chances at losses or injuries? People mostly forget you played no one in November when you’re staring down the barrel at 11-1 and have two top 25 pelts on your wall from in-conference competition … plus with everyone but the Big 12 having a conference title game, you basically get a free top 25 opponent at the end of the season. You lose one game and win the conference, you’re getting in. You lose two, but only one in the conference, things get dicey.

Of the two lines of thought just presented, number one sounds a lot better. It’d be nice if the best programs in the country all thought that way, but the “house money” theory doesn’t really work that well when it comes to wins and losses, and games against other good teams are often going to neutral sites with, yeah, you get that TV money and all, but you also get the risk of losing; having less of your fan base able to see the game (translation: grumbling); and you’re not really hemorrhaging money just paying some patsy to come get sacrificed at your place because your fan base will show up anyway.

Thought process number two is the unfortunate way this thing seems to be going. There looks like in some circles to be what I always call the “Lloyd Carr scheduling method”: put one potential tough game on the schedule to see what you’ve got going into conference season.

However, not everyone is thinking that way. The “Power 5 mandate” by the SEC sounded nicer than it really was, but in fairness, the SEC has stepped up its out of conference scheduling of late.

There’s no way of telling which way it’ll go, but basically, this Saturday is your chance to do a whole lot of stuff around the house before winter gets here and not feel like you’ve missed anything, because you probably haven’t.

That’s a good thing. The bad thing? We had this same type of feeling two weeks ago. There will be a USC to get Boston College’d, but you can figure out which one that is halfway through.

Get in the barn and get out the tools. Get some stuff done around the yard. See, there’s a silver lining to just about everything.