Late in a college football season, division and conference championships are won and lost. Prestigious bowl bids — life-changing achievements for the players and coaches at various programs — hang in the balance. The pressure of late-season college football is excruciating, and it’s precisely why 13-0 is one of the hardest feats in sports, no matter how soft the schedule.

There is a difference between being a 12-1 candidate for this playoff berth or that New Year’s Day bowl bid… and, on the other hand, being 13-0. When you never lose, no amount of criticism can withstand the fundamental reality of having met every challenge… even if every challenge was not relatively challenging. College football fans continue to wrestle with this issue each year, and for many, there’s no difference between a 12-1/11-2 comparison over here and a 13-0/12-1 comparison over there.

The Marshall Thundering Herd and the team’s critics were both brought in touch with this reality on Friday.

The fact that Marshall lost to Western Kentucky, 67-66, enabled critics to pounce on the Herd, but the result paradoxically showed how well Marshall had withstood the fires of November pressure… until now. Had Marshall gone 13-0, it would have deserved to have played in a so-called “New Year’s Six” bowl. The fact that Marshall is now out of the running (barring a truly crazy series of 12 to 15 events) should only enable neutrals to appreciate what the Herd had done heading into their game against WKU.

If this 67-66 shootout loss for Marshall recalled a recent college football memory, another Thanksgiving Friday game fit the bill quite nicely.

One year ago, on Thanksgiving Friday, another team intent on making a prestigious January bowl had almost reached the finish line. The 2013 Fresno State Bulldogs, like the 2014 Thundering Herd, played a weak schedule and went 11-0 thanks to a brilliant offense. However, in game 12, the defense collapsed.

The final score from Fresno State’s ambush loss at the hands of San Jose State on Thanksgiving Friday: 62-52. The feel and flow were not exact, but the basic causes for defeat were similar:

That’s one memory recalled by this game. It’s a painful memory for both the Mountain West (last year) and Conference USA (this year). The fact that Marshall, as Conference USA’s New Year’s Six bowl candidate, lost so close to the winner’s circle also recalls Houston’s loss to Southern Mississippi in 2011, under a coach named Kevin Sumlin. Conference USA and the Sun Belt have never made a New Year’s Day bowl game. The Mountain West is now in the driver’s seat for that prize in the 2014 season, with Northern Illinois (MAC) and Memphis (The American) next in line.

Yet, even though the Mountain West profited on Friday, it did lose one contender for the NY6, setting up a possible scenario in which it could still get shut out. 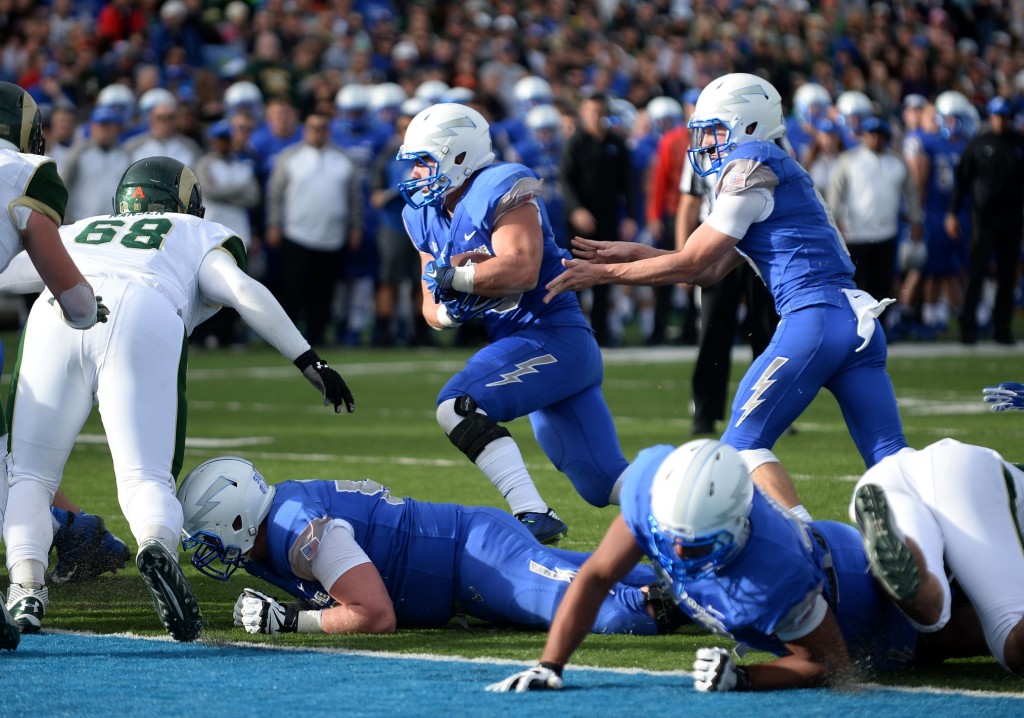 Air Force’s win over Colorado State does put Utah State in the NY6 conversation, but Colorado State had a solid profile thanks to a road win at Boston College. The Mountain West would have preferred a CSU win.

The Colorado State Rams had only one loss entering Friday’s game against Air Force. CSU had beaten Boston College — slayer of USC and near conqueror of Florida State — on the road in New England. The Mountain West would have wanted the Rams to stay in the NY6 hunt, but they’re done now that they cannot win the Mountain West Mountain Division and therefore the MWC championship.

Colorado State’s late-season loss could usher in a doomsday scenario for the Mountain West, and it is simply this: The winner of Saturday’s Utah State-Boise State Mountain Division title game (that’s what it has become) then loses in the MWC Championship Game to a weak champion of the West Division in that league. If the USU-Boise winner loses on Dec. 6, Northern Illinois and Memphis could become the two teams left standing in the Gang Of Five pool of NY6 competitors.

Past Mountain West seasons (also Western Athletic Conference seasons) have witnessed a late-season ambush of a major bowl candidate. Think of Boise State falling to Nevada at the end of the 2010 WAC season. What happened to Fresno State a year ago might have been thought of by Colorado State fans (not just Marshall fans) today.

Late-season football among the lower classes of the Football Bowl Subdivision can be so wildly entertaining. It has also been hell on favored teams with everything to gain… and lose.

Emphasize that last part about losing after Friday’s events in Huntington, West Virginia, and Colorado Springs.