The honor of being named a team captain comes with a burden of responsibility to uphold the image of the team, and in college sports, the university as a whole. Being named a team captain by your peers comes with great pride and is not to be taken for granted. Presenting the best your team and university have to offer and representing both on the field puts players in a spotlight for many good reasons. Unfortunately, this season has seen some captains take their positions for granted with signs of poor sportsmanship.

On November 1, new Big Ten member Maryland made its first trip to Penn State’s Beaver Stadium since 1992. Before Penn State joined the Big Ten in 1993, the Terrapins and Nittany Lions played almost every season dating back to 1960. Maryland had not beaten Penn State since 1961, and the last time the Terps avoided a loss to their neighbors north of the Mason-Dixon line came in the form of a tie in 1989. The Terrapins got off the bus in State College with a chip on their shoulders, and off-season comments made by former Maryland assistant coach James Franklin to Penn State alums and fans in the state of Maryland certainly added some fuel to the fire that Randy Edsall and his program would burn.

As the two Big Ten East rivals took the field, Maryland players got in the faces of Penn State players, starting a bit of a pushing and shoving match that was very uncommon to see in Beaver Stadium over the years. After things settled down, the team captains from both teams arrived at midfield for the pregame coin flip. As the Penn State captains extended their hands to their Maryland counterparts, this happened:

Maryland ended up having the last laugh with a late field goal giving the Terrapins the win, but after the game the college football world looked past the result and focused on the nonsense before the game. Even in victory, Maryland managed to give the program and university a black eye. Following the win, Edsall and Maryland athletic director Kevin Anderson apologized for the pregame antics of their players. A couple of days later, the Big Ten issued a public reprimand of Maryland and the actions taken by the captains — Stefon Diggs, P.J. Gallo and Sean Davis.

Diggs was also suspended for one game for making contact with a Big Ten official during the pregame confrontation out of the team entrances. Maryland alternates team captains on a week-by-week basis. The Terps have not used Diggs, Gallo or Davis as a team captain in the two games since this incident at Penn State. You would hope that the attention given to this show of poor sportsmanship and ridiculousness would have sent a message to players across the country that this is frowned upon and ends up making you look silly. For the most part, you are probably right. Somehow, though, the message was never delivered to Central Michigan.

Hosting in-state MAC West rival Western Michigan on Saturday in a key division matchup, Central Michigan’s captains showed us one more display of poor sportsmanship. As officials announced the results of the pregame coin flip, Western Michigan captains extended their hands for a final handshake with their counterparts from Central Michigan. The Chippewas, though, turned away and walked back to their sideline, refusing to shake hands.

The decision to give the Broncos the brush-off gave Western Michigan just a little more incentive to hand its in-state directional-school rivals a loss, not that the Broncos needed much more incentive. A win kept Western Michigan in the hunt for the MAC West title and set up a possible winner-take-all clash in the division against Northern Illinois this week. For a team that won one game in 2013, nothing is being taken for granted, and P.J. Fleck has turned Western Michigan around in a hurry by respecting the game.

“Everybody has their beliefs,” Fleck said, again via MLive.com. “I do know this: It’s a man’s game. You might not respect your opponent. I was taught a long time ago by Joe Novak, Jerry Kill, Mike Nolan, Dennis Erickson to be classy. Be you, but be classy. They didn’t shake our hands. That’s OK. I just know this: Our players are always going to respect the game. You always have respect for your opponents, but respect the game.” 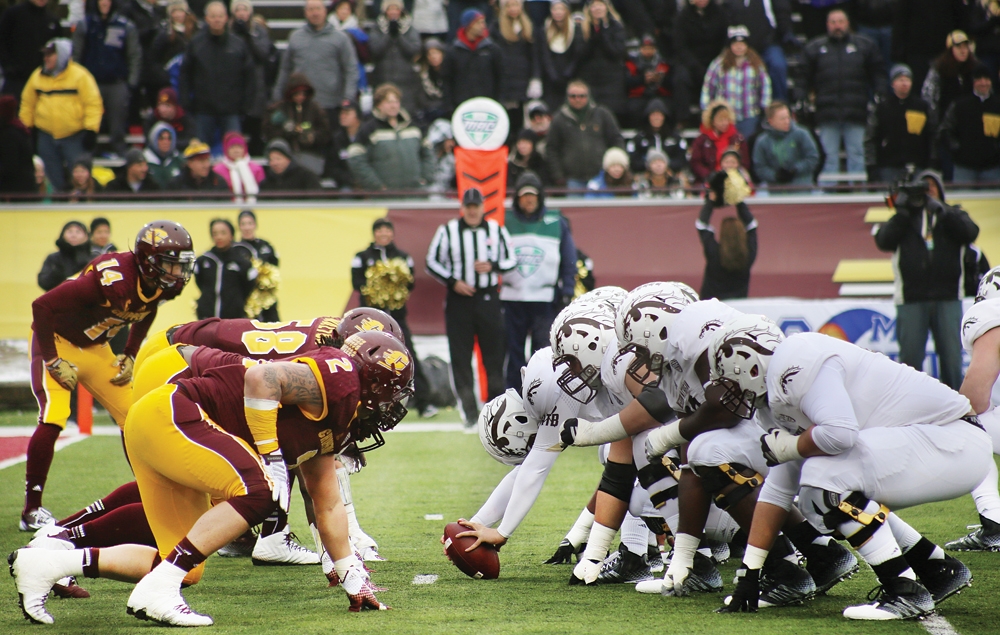 Sometimes the football gods will reward those who do respect the game. On Saturday, the gods smiled upon Western Michigan with a 32-20 victory, keyed by a 22-point second quarter and two fourth-down stops by the defense. On this day, Western Michigan got the last laugh. Central Michigan was embarrassing before the game and embarrassed after the game.

Central Michigan acted swiftly in addressing the non-handshake from captains Titus Davis, Justin Cherocci, Andy Phillips, and Leterrius Walton. All have been stripped of their captaincies for the remainder of the season. The MAC chimed in Monday evening to issue a public reprimand of those now former captains, and the conference endorsed the decision to strip the captain label from each. No suspensions were issued, but the point and lesson will hopefully resonate to all moving forward: Just shake hands.

Fleck said it best: have respect for your opponents. Having respect for an opponent and liking your opponent are two different things. If you have a score to settle with the team in the other uniform, it is best to send that message on the scoreboard at the end of the game and not before the game kicks off. Any message you try to send before the game puts you at further risk of looking like a jerk. We have enough of those in sports already.

Respect the game. Respect your opponent. Shake hands. Make your point on the scoreboard.