Gurley’s third-and-16 run in the third quarter of Saturday’s Georgia-South Carolina game might not have been as historically resonant as O.J. Simpson of USC in 1967, cutting back against the grain in front of head coach John McKay against UCLA. It might not have been as significant a criss-crossing dash as Johnny Rodgers’ unforgettable kick return for Nebraska against Oklahoma in the 1971 “Game of the Century.” Yet, it was still, on merit, an all-timer of a run. Gurley unfurled three or four runs in this game which marked him as special on a Herschel Walker level in the annals of Georgia football. If there’s a “most outstanding college football player” through three weeks in the 2014 season, Gurley is that player.

The point was really rather simple, then: When South Carolina quarterback Dylan Thompson — let’s not mince words here — cracked under pressure and threw an interception which set up Georgia at the Gamecocks’ 4-yard line late in regulation, the Bulldogs’ plan did not have to be complicated.

Moreover, it SHOULD not have been complicated.

All offensive coordinator Mike Bobo had to do was say, “Let’s give the rock to Gurley. Maybe mix in fullback Quayvon Hicks on second down, but we’re then going back to Gurley on third and, if need be, fourth down. This is our superstar. There’s no one else we’d rather trust with the game on the line.”

Nothing — nothing in the world — should have led Bobo to trust any other plan or any other person. This was — and is — obvious. Every fan watching on television or following on Twitter knew this. No second-guessing here. This was overwhelmingly apparent before Georgia lined up for that first-and-goal snap from the 4, so close to stealing a win on the road after being outplayed most of the evening.

Instead, Bobo gave the ball to his not-necessarily-bad-but-certainly-less-than-great quarterback Hutson Mason. What ensued was that when Mason watched a rollout pass get blown up by South Carolina’s defense, he threw his pass short of the line of scrimmage with the nearest pass catcher running away from the area where he dumped the ball. All Mason had to do was gun the ball out of the back of the end zone, and the possession could have been saved. However, the grounding penalty cost Georgia a realistic shot at a go-ahead touchdown.

A few plays later, Bulldog kicker Marshall Morgan — given a short kick from the wide hashmark — couldn’t pull the ball enough. He kept Georgia’s tying field goal wide of the nearside upright. South Carolina, after converting fourth down and two inches by a millimeter in the final 90 seconds, held on for a wacky 38-35 victory which featured an abundance of startling plot twists throughout the final seven minutes. 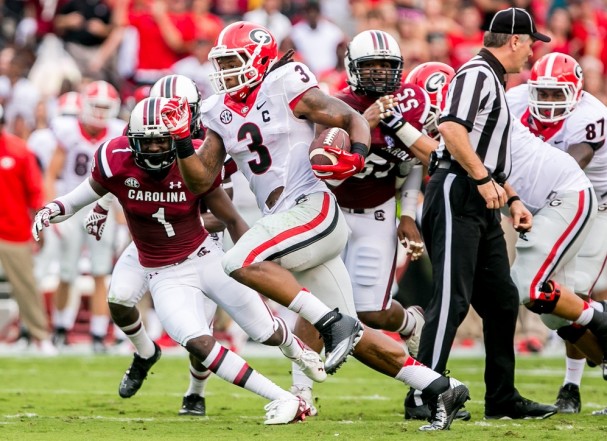 Todd Gurley was the best player on the field in Saturday’s Georgia-South Carolina game. He will likely be the best player on the field in every remaining game Georgia plays this season. Yet, Mike Bobo didn’t trust him when the Dawgs were four yards away from taking the lead against a suddenly shaky South Carolina squad. That failure near the goal line could overshadow the whole of Georgia’s season.

It’s as simple as two plus two equals four: When a football team has a basic plan that works — especially if it’s on the ground — said plan should be followed. This is even more the case in light of the fact that Hutson Mason is anything but a stone-cold assassin… the antithesis of the quarterback Aaron Murray became at Georgia. If Murray had been on the field, okay, maybe give him a look at the 4. With Mason under center — and on the road as well — there was no conversation. There was no debate… or at least, there shouldn’t have been.

South Carolina certainly played well — better than many expected — for most of this game, but a fourth-quarter collapse, rich with the level of puckering that has marked much of the Gamecocks’ largely snake-bitten football history, put Georgia in the driver’s seat. The fact that Georgia, to use a baseball expression, lost by throwing its fourth-best pitch instead of its money pitch will rightly eat at coaches and players alike.

The only bit of consolation for Georgia is this: In each of the past three seasons, the Georgia-South Carolina winner has not won the SEC East.  However, that fact probably won’t be enough to make the Bulldogs sleep peacefully tonight. Moreover, it shouldn’t.

It’s one thing to lose with your 98-mile-per-hour fastball on the outside corner, driven out of the yard by a great swing from Mike Trout. It’s another thing to throw your mediocre “get-me-over” change-up and have a .224 slap hitter knock the ball off the right-field foul pole.

More twists and turns await in what is sure to be a chaotic and fluid SEC East. That’s what Georgia will face this season. It’s too bad from Georgia’s perspective, though, because if the Dawgs had won this game, they’d have basically eliminated South Carolina from the division race on Sept. 13. The battle for Atlanta could have been so much easier for Mark Richt, but it won’t be… because his offensive coordinator, for some strange reason, didn’t want to do things the easy way against South Carolina.

That easy way had jersey number three on his back.

Maybe next time, Mike Bobo will keep it simple when simple is all that’s needed to win a huge contest.